The desert is a bioclimatic landscape very common in the terrestrial surface, characterized by its very low rainfall and scarce presence of fauna and flora, given the low humidity levels.

Although the traditional image of the sandy desert alludes to warm and equatorial climates, the truth is that those situated on the arctic plateau or in the tundra also count as deserts.

The deserts are the product of different erosion processes, such as wind (given its high presence of winds that even form sand storms) or the impact of solar radiation. The degree of intensity of these factors will depend on many characteristics of the desert, such as the type of sand formed or the nature of the soil. 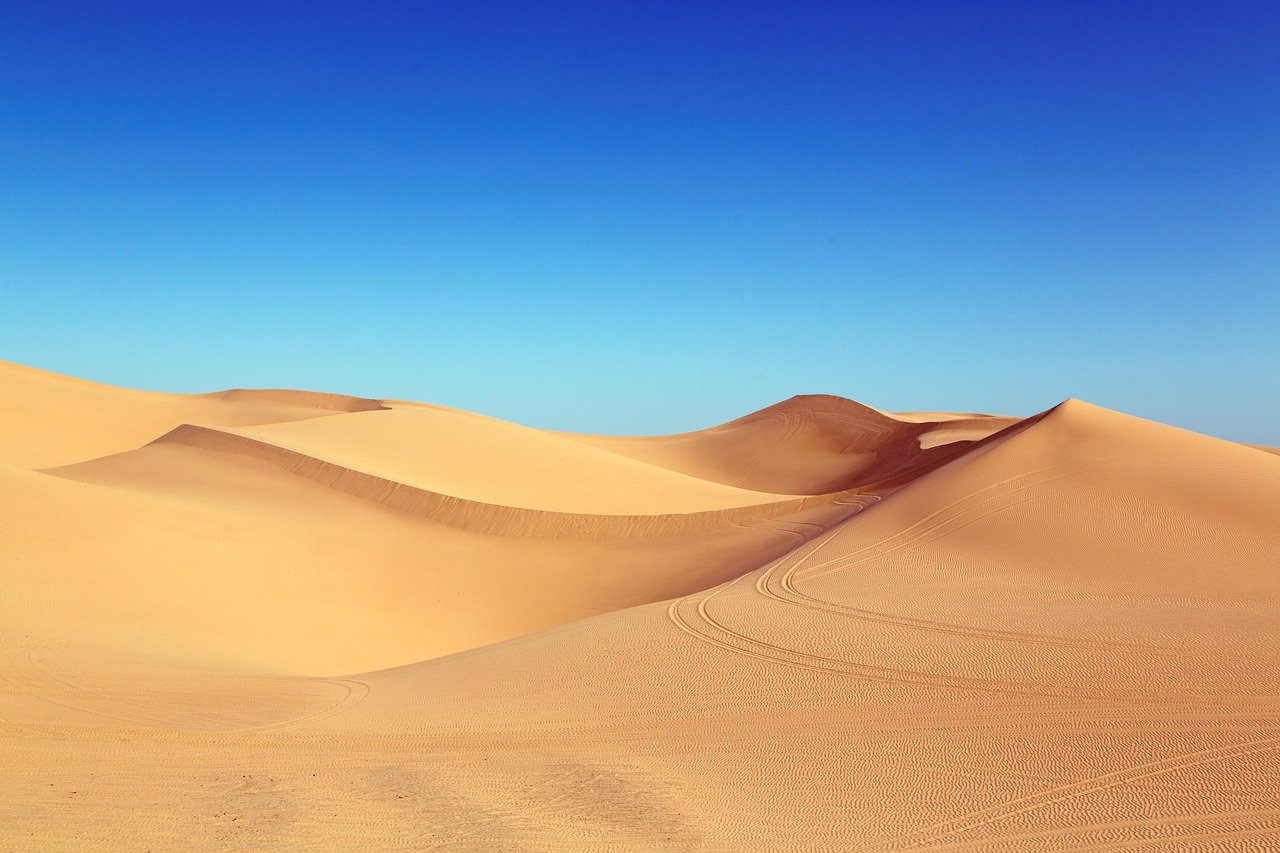 Considered in their entirety, deserts occupy almost a third of the surface of the earth, some 50 million square kilometers. 53% of them correspond to warm deserts and the rest to frozen deserts.

They are distributed throughout the continents, being the best-known regions the Saharan in North Africa, northern Mexico, the Asian tundra in Russia, Greenland and Alaska, as well as in southern Chile and Argentina, or the platform of the Arctic.

It is possible to identify three climatic zones around which the different deserts are distributed, taking into account the average of annual rainfall:

Semi-arid (steppe): with an average of 250 to 500 mm of precipitation per year, they cover 15% of the earth’s surface. They are located on the edges just of the deserts.
Arid: annual rainfall of 25 to 250 mm maximum, covering 16% of the land surface and make up the bulk of the deserts.
Hyperáridas: the margins of drought in these zones are such that usually it does not rain in years or not to do it at all. They represent only 4% of the earth’s surface, including the polar deserts and the heart of the great warm deserts.
The temperatures in these areas are usually extreme, with huge thermal variations between day and night. Warm deserts can record highs of over 40 degrees Celsius during the day and descend below zero at night. In the case of polar deserts, the temperature remains at margins much lower than zero (-40 ° C), depending on the stationary cycle.

According to its geographic location and prevailing weather pattern, it is possible to classify the deserts in several types:

Tropical deserts Located in the equatorial fringe of the planet, they are under the effect of the trade winds that prevent the formation of a cloud cover and maximize the solar radiation on the ground. Most of the deserts of the planet are of this type, including the largest of all, the Sahara in North Africa, whose temperatures reach 57 ° C.

Midlatitude deserts. They are found in subtropical areas of high atmospheric pressure, usually located in drainage basins distant from water sources such as oceans or lakes. The Sonoran Desert, in Mexico, is of this type.

Desert of auger in humid air. They are the consequence of the action of great mountain barriers that restrict the access of the wind and therefore of the humidity. The Judean desert in Israel is a clear example of this.

Coastal deserts Usually located in continental borders and under the effect of complex wind systems that prevent the formation of precipitation and result in an unstable climate system. The Atacama Desert, in Chile, the driest in the world, belongs to this classification.

Monsoon deserts Produced by the action of the monsoons (system of seasonal winds), which are born in the ocean and lose their moisture as they move on the continental shelf, unloading it quickly and drying the most remote areas. The Thar desert in Pakistan is a clear example.

Cold deserts. Generally located in areas of high altitude and low rainfall, they contain the same aridity of their warm counterparts, but with higher margins of atmospheric pressure. The high Andean Puna illustrates this case well.

Polar deserts With temperatures below the freezing point of water, they are extensions of ice (and snow in some cases) practically without annual rainfall, on beds of rock or gravel. The central ice sheet in Greenland is an example of this.

The deserts usually present two different types of soil, taking into account the impact of erosion on the materials that comprise it. Thus, it is possible to speak of sandy soils, obviously composed of the rocky microparticles that make up the sand, and which the wind pushes to form dunes; and also rocky or stony soils, composed of larger pebbles or accumulations of stone of various kinds.

It should also be noted that the polar deserts, whose surface is covered entirely by ice, can not really be treated as a type of soil, since this can be even kilometers below the frozen layer. 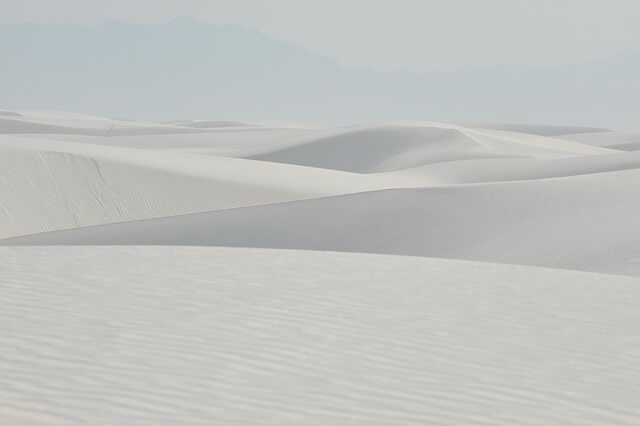 The paleo-deserts constitute a special case that deserves a separate one, since these are areas whose climatic character changed abruptly in a recent geological past, allowing the accumulation of abundant fossils and archaeological remains, protected from decomposition by the lack of moisture in the arid climate .

The Argentine Ischigualasto (Valley of the Moon), is the Kalahari desert and the Sand Hills of Nebraska are considered paleo-deserts, and in them are carried out intense work of archaeological recovery and collection of ancient samples.

The vegetation of the deserts is, in principle, scarce, given the very low humidity margins. The one that exists has adapted to resist such adverse conditions, and is generally xerophilous vegetation, with predominance of thorny and resistant plants, such as the cactus, as well as weeds and, in the best of cases, low shrubs. height.

Contrary to what is thought, there is a well-defined desert ecosystem, although adapted to the adverse environment and concentrated in the preservation of body moisture. Perhaps this is why reptiles (such as snakes), insects (ants, beetles) and arachnids (scorpions, spiders) abound.

However, there are also numerous desert rodents, refugees in burrows far from the sun, as well as birds of prey and scavengers, or camelids of high resistance to drought. 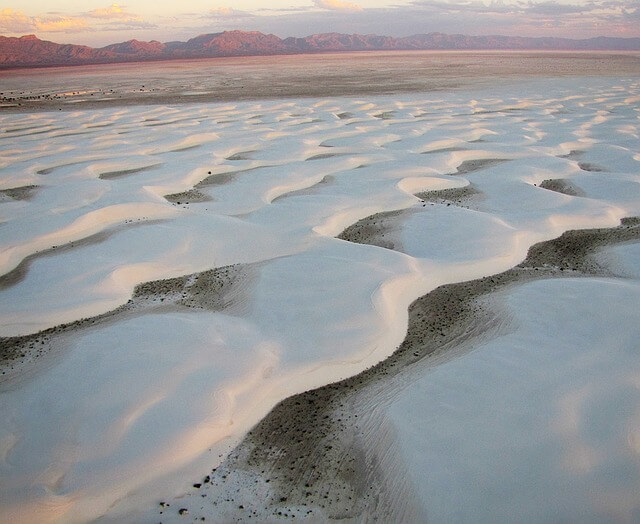 Revealed by erosion and protected from moisture, in the deserts are numerous mineral resources, such as oil basins (especially in the Middle East) or heavy metals.

The desert sand, likewise, is usually rich in calcareous elements and salts, which is why salt flats are often found in desert areas, such as in the Uyuni region of Bolivia. This type of deserts drains even more humidity from the environment, thus feeding its aridity.

9. Greater extensions of the world

The largest desert areas in the world are:

There are desert extensions outside our planet, although the only ones that seem to have wind displacements are those of Mars, where there is a circumpolar sand desert of almost 5,000,000 square kilometers. These deserts have high wind abrasion margins, since the wind carries a large amount of particles in suspension at very high speeds.