Information on Sir Francis Bacon career under Queen Elizabeth, under James 1., fall and disgrace day of his career.

Career Under Queen Elizabeth: Bacon’s prospects were changed by the sudden death of his father. Compelled to earn a living, he relinquished a diplomatic career for the law, and under the sanction of his uncle, Lord Burghley, he was admitted to the bar. However, further respectful appeals to Burghley for favor, prolonged over many years, were coldly received. Burghley was concerned with the advancement of his son, Bobert Cecil, and suspected the vast intellectual designs of his nephew. ( Bacon frankly exposed these suspicions later in a remarkable letter to his uncle.) Meanwhile in 1584, at the age of 23, he had taken a seat in the House of Commons and quickly attained distinction in the debates and committees. In a Letter of Advice to Queen Elizabeth (1584 or 1585) he recommended measures for dealing with the Boman Catholics, and a few years later (1589) he put forward An Advertisement touching the Controversies of the Church of England, in which he impartially censured what he considered to be the harsh conservatism of the bishops and the bigotry of the Puritans. He was continually harassed by debts, and the revision of the clerkship of the Star Chamber, procured for him by Burghley in 1589, did nothing to relieve his anxiety, as the post did not become vacant for some 20 years. 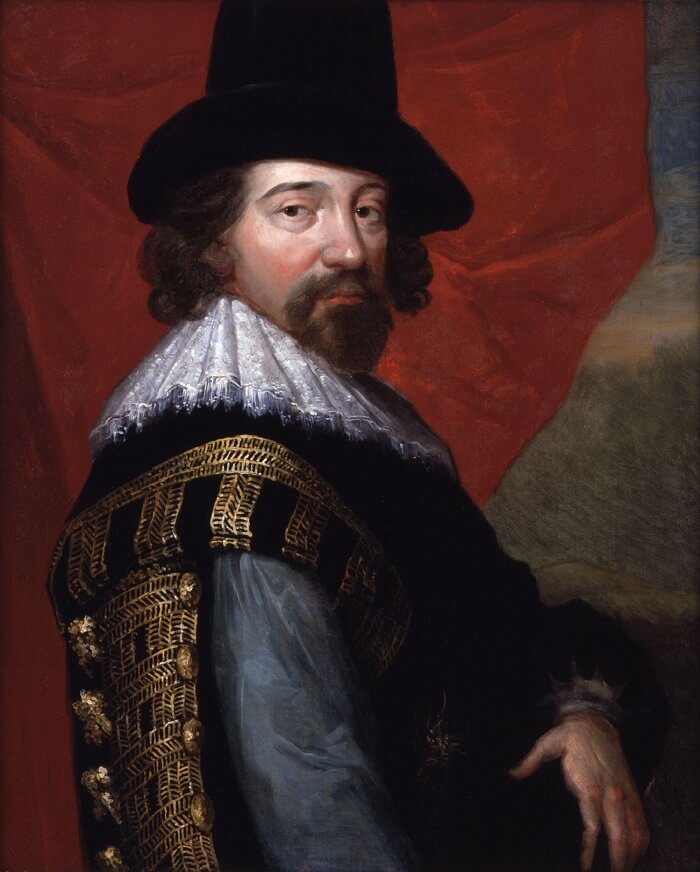 Yet all the leisure hours he could snatch from the pursuit of public success he devoted to literature and philosophy; the main elements of his reform of knowledge were established in his mind with consuming strength by the time he was 32. His divided life, torn between ambition for office and the craving to achieve his immense program of intellectual reform, constitutes the tragedy of Bacon’s career. At a later time he confessed to Sir Thomas Bodley that he knew himself by inward calling to be fitter to hold a book than to play a part. He wrote that he had led his life in civil causes, for which he was not very fit by nature and more unfit by the preoccupation of his mind with studies.

Despairing of the support of Burghley, he turned to a more flamboyant patron, Bobert Devereux, earl of Essex, the queen’s favorite. He devoted himself to the earl’s affairs, and Essex repaid his assistance by pressing his claims on the queen for the office of attorney general. By ill fortune, Bacon had incurred the displeasure of Elizabeth in speeches in the House relating to the subsidies required for the defense against Spain. At length, after painful delay, the attorney generalship was given to Bacon’s great rival Edward Coke. The rebuff deeply shook him, especially since at this period he was dangerously in debt and was once even arrested by a creditor. He was employed on much important business, including the examination of persons suspected of complicity in a plot to murder the queen; indeed, he frequently acted as a counsel at large to the sovereign.

In the meantime, he gradually became alienated from Essex, whose perilous courses he had foreseen; standing between the queen and the impetuous favorite, he was placed in a position of extreme delicacy. After the spectacular failure of Essex in Ireland in 1599, Bacon openly took part against him, and when the wild insurrection of the following year was suppressed, he appeared in court on the side of the prosecution at the earl’s trial. His deadly cross-examination of the man who had been his friend and benefactor has been severely condemned. The report of the case, which he subsequently published in vindication of his conduct and in which he skillfully suppressed parts of the events, has, in the opinion of some writers, added to his perfidy. It must be recognized, however, that he had sought to moderate the queen’s fury against Essex; and, in any case, as soon as the true character of the earl’s designs was revealed, Bacon was forced to choose between his sovereign and a traitor.

Career Under James I:

After the death of the queen in 1603, the fortunes of Bacon remained dubious for a period, although he hastened to pay court to the new king and the new men of power. He received, with many others, the honor of knighthood; he married Alice Barnham, the daughter of a rich alderman; and he performed his duties in Parliament and in the courts with distinction. He was prominent in the important issues of the time, but it was not until 1607 that the long-coveted position of solicitor general was granted him at the hands of James I. During the debates in 1607 on the union between England and Scotland he spoke with admirable foresight on the benefits of the union in opposition to the narrow prejudices of the Commons. He took a leading part in the gathering tension between Parliament and the crown. Robert Cecil, now earl of Salisbury and lord treasurer, proposed a bold scheme by which the king’s government could meet its financial requirements. Under this plan the king would receive an immediate grant and a guaranteed annual income in return for the renunciation of certain unpopular feudal sources of revenue. After a series of exchanges between the king and the House of Commons in 1610, James rejected Cecil’s advice and made demands so excessive that the Commons refused them with indignation. The king promptly dissolved Parliament. In these transactions Bacon attempted, in some ingenious speeches, to conciliate the House while defending the rights of the king.

He was soon engaged in further efforts to defend the royal prerogative against encroachment. He had argued in a paper published in 1606, A View of the Differences in question betwixt the Kings Bench and the Council in the Marches, that the king held his prerogatives not from the law but immediately from God. And in private notes, named Commentarius Solutus (Loose or Casual Commentary), he candidly avowed his policy to exalt the king’s “summary justice” in all circumstances. Bacon combined a sincere belief in the doctrine of the divine right of kings with a contempt for lawyers in politics. He offered the sinister counsel that the king should distract attention from internal dissension by foreign aggression.

In 1612, Salisbury died, and Bacon hastened to offer himself in his place. His anxiety to obtain promotion was rewarded in 1613 by the office of attorney general. Amid his manifold labors he found time to supervise the planning of the gardens at Gorhambury in Hertfordshire. His energy was unceasing. He was involved in great cases in the courts—in the examination, with torture, of Edmond Peacham (1615) for charges of treason, and in the prosecution of the earl of Somerset for the murder of Sir Thomas Overbury (1616). After the removal of Somerset he cultivated the acquaintance of the new favorite, George Villiers, later to be duke of Buckingham. The prolonged enmity between Bacon and Coke, who was now chief justice, culminated in 1616 over the question of the king’s powers in the courts. Bacon naturally threw his weight in support of the royal prerogative, and at a dramatic meeting in the presence of James he secured the submission of Coke and the judges.

These services were not disregarded; he became a privy councilor in 1616, and in March 1617, to his intense gratification, he was appointed lord keeper. He made a triumphant entry into Westminster, clothed in purple and attended by a splendid cavalcade. For a time he was out of favor because of his opposition to the marriage of the daughter of the fallen Coke to the brother of Buckingham. He became reconciled with Buckingham and the king upon the receipt of a condescending letter from Buckingham, for which Bacon expressed profuse gratitude. In 1618 he was made lord chancellor, and shortly afterward he was created Baron Verulam. Among the notable legal activities of his chancellorship were the trials of the earl of Suffolk, the lord treasurer, for corruption (1619) and of Sir Henry Yelverton, the attorney general, for abuses of his office (1620). In January 1621, Bacon was raised to the dignity of Viscount St. Alban. The form St. Albans is found in some sources, but Bacon, in official documents, signed his name without the final “s.” He loved magnificence and lived in princely style at York House and at Gorhambury.

Bacon had attained the pinnacle of his career when a terrible disaster fell on him, brought about by his political enemies. Beginning quietly with inquiries concerning abuses in the courts, charges against the lord chancellor multiplied, and a flood of accusations alleging bribery and perversion of justice accumulated. At first he treated the indictments lightly, but soon he was prostrate under the strain. The cases cited against him appear to be instances of carelessness rather than dishonesty, and, in receiving gifts from litigants, Bacon was yielding to the common practice. He clearly erred in accepting gifts while cases were pending, but there is no evidence that he put justice up for sale. He sent, however, a full confession and submission to the House of Lords and begged for mercy. Sentence was pronounced on May 3, 1621, by the chief justice in a crowded house: the Lord St. Alban was ordered to pay a fine of £.40,000, to be imprisoned in the Tower, to be barred forever from public office, and to be forbidden to come within the vicinity of the court. The imprisonment and presently the fine were remitted. He retired to Gorhambury, where he lived in considerable state. 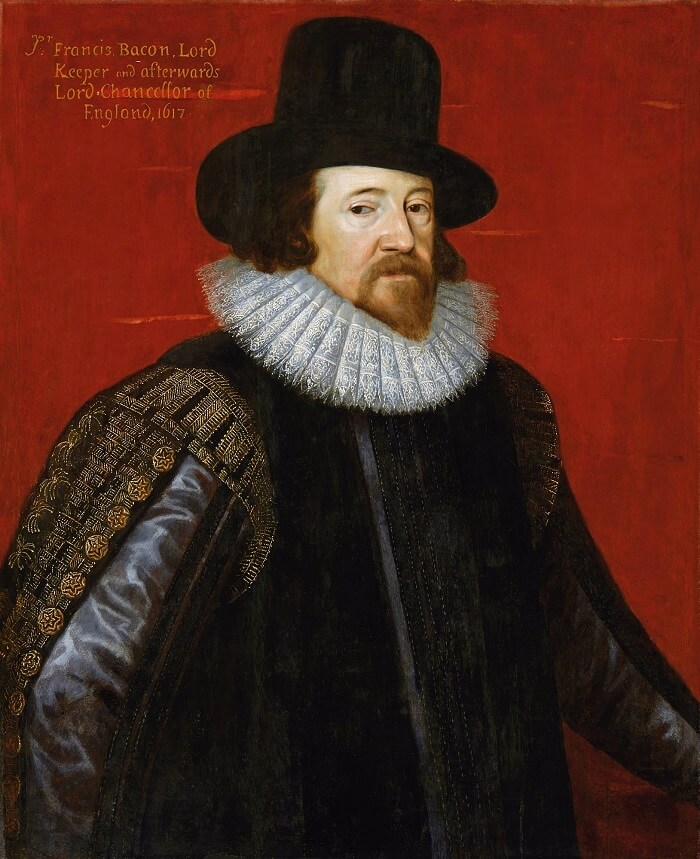 He devoted himself to literary and philosophical work, and the five years remaining to him saw the publication of the History of Henry VII (1622), the De augmentis scientiarum (1623, an expanded Latin translation of the Advancement of Learning), revisions of the Essays, and other important writings. He resisted Buckingham’s efforts to purchase his old home, York House, but eventually consented in return for permission to enter London. In March 1626, intent on experiments relating to the preservation of flesh, he alighted from his coach, bought a fowl from a cottage, and stuffed it with snow. He contracted a chill and took refuge in the house of Lord Arundel (Thomas Howard, 14th earl of Arundel). There he died on April 9.

Bacon’s personality has continued to fascinate and disconcert historians. In his political relations he often appears servile, ruthless, and unfaithful; yet on occasions he gave shrewd advice to James. His ideal of government was determined by the practice of Elizabethan monarchy. He desired a sovereign who would give ear to the counsels of experienced statesmen and heed the opinions of the popular assembly. But he was convinced that the king should preserve his independence and authority, for upon his prescience depended the safety and prosperity of the realm. In private life Bacon was genial and considerate, winning the admiration and affection of his friends.