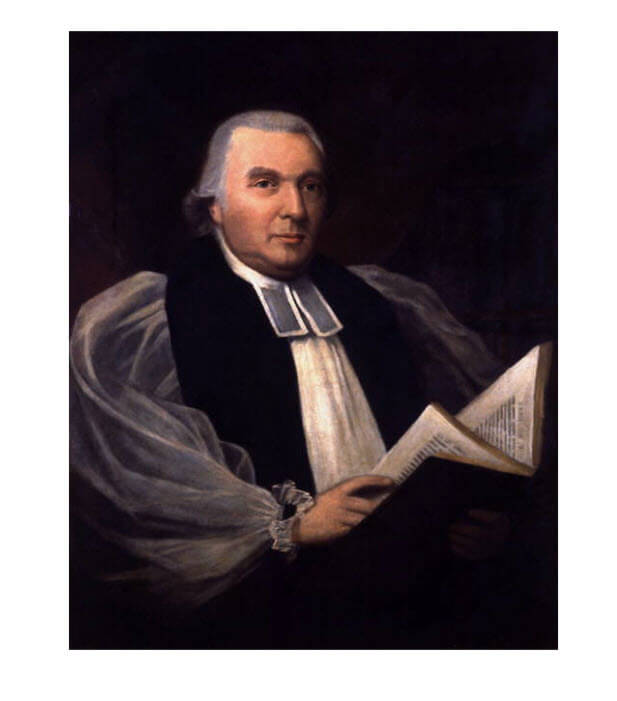 Samuel Seabury ; (1729 – 1796), American clergyman who was the first bishop of the Protestant Episcopal Church in America. Seabury was born in North Groton, Conn., on November 30, 1729. He graduated from Yale College in 1748 and three years later took a course in medicine at the University of Edinburgh. He did not, however, practice medicine, but began studying theology instead. Ordained in the Church of England in 1753, he returned to America in 1754 and became reetor of Christ Church, New Brunswick, New Jersey In 1757 he received the pastorate of Grace Church, Jamaica, L. I., and in 1766, of St. Peter’s, Westchester, N. Y.

In 1775, because of his Loyalist sympathies, Seabury had to leave his parish and go to New York City, where he resided during most of the Revolutionary War. He wrote numerous articles in support of the Tory cause, of which he was one of the ablest advocates, and was imprisoned for a time for his loyalty to the king. However, when peace was declared, he became a loyal supporter of the United States.

In 1783, after the war, 10 out of the 14 Episcopal clergymen in Connecticut assembled at Woodbury to consider action concerning the organization of the church under the changed civic conditions. They eleeted Seabury as the first Episcopal bishop in America. He then sailed for England and waited in London more than a year for consecration by the English bishops. Owing to the connection between the Church of England and the state, various political reasons stood in the way, and he finally decided to apply to the Scottish bishops, who were not under the jurisdietion of the Church of England. On Nov. 14, 1784, Seabury was consecrated in Aberdeen by the bishop and coadjutor-bishop of that see and by the bishop of Moray and Ross.

Returning to the United States, he assumed his episcopal duties and became reetor of St. James’ Church, New London. Seabury’s jurisdietion was recognized over Rhode Island, Connecticut, and later Massachusetts, but the validity of his consecration was denied by many, partly because of prejudice caused by his former political attitude. Two bishops were consecrated for the southern and middle Atlantic states in England in 1787. All three were eventually recognized by the General Convention in 1789 and a single Episcopal Church assured.

Seabury exercised a great deal of influence on the final shape of the constitution and liturgy of the Protestant Episcopal Church in the United States, although he was not entirely happy with its final form. A man of strong views, he was also a man of great simplicity, humility, and self-sacrifice, and his services were of inestimable value to the Episcopal Church in the United States. Seabury died in New London, Conn., on Feb. 25, 1796.