What is gannet? Information and knowledge about gannet birds. Where do gannet live, How do they dive? 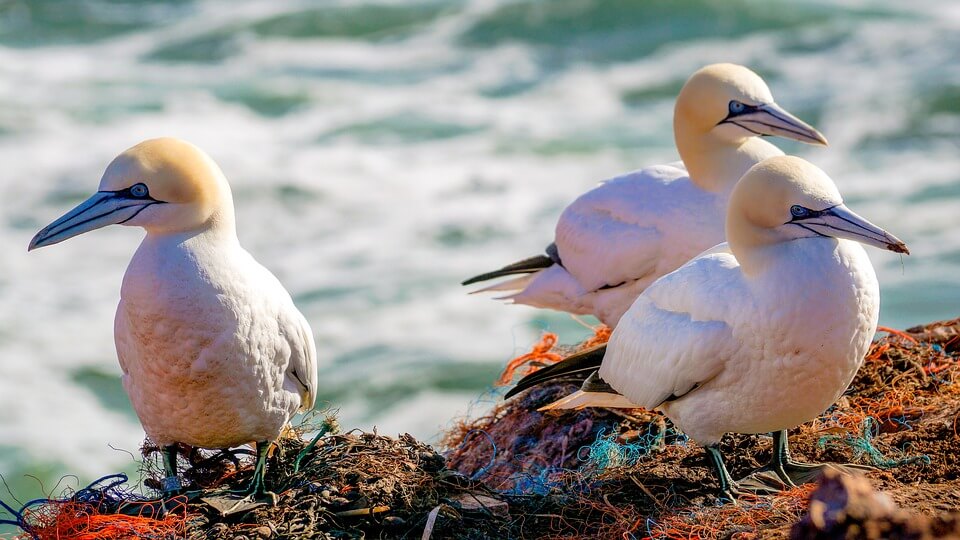 The large sea birds known as gannets have long pointed wings, long wedge-shaped tails and thick pointed beaks. The kind seen near the shores of the British Isles is also called the solan goose. It is a big white bird, about three feet long, with black wing tips, yellowish buff head and neck and a dark line extending backwards from the eye which makes the bird look rather as if it is wearing spectacles.

Gannets are wonderful divers. They flap and glide easily above the sea and then suddenly, from as much as 100 feet in the air, they plunge down head first, closing their wings as they hit the water with a great splash to catch a fish, which they swallow whole. They spend most of their time at sea but always return to the land to breed in huge colonies, or groups, in the North Atlantic. Colonies of gannets can be found in Canada, Iceland and the Faeroe Islands, as well as in a number of places in the British Isles, including the Bass Rock in the Firth of Forth, Scotland, and the island of Grassholm off the coast of Pembrokeshire, Wales. Here, from March onwards, the bird? crowd closely and noisily together, building their nests of sticks and seaweed and laying in April or May a single blue egg covered with a chalky white substance. When first hatched, the young are naked with black skin, but later they are covered with white woolly down. This is followed by a brownish black plumage with white spots, and the birds do not gain the full adult colouring until about the age of four. After they are two months old the youngsters are deserted by their parents and are soon forced by hunger to take to the sea. The fat young gannets are stili taken for food on one Scottish island by special permit.

There are similar gannets in South Africa, Australia and New Zealand; all are closely related to the boobies of the tropical seas, some of which are brown and white even when grown up. The red-footed booby nests in trees and perches on them; ali the others prefer rocks. Booby comes from a Spanish word meaning “dunce”, and it is used because the birds stupidly allow themselves to be caught so easily.