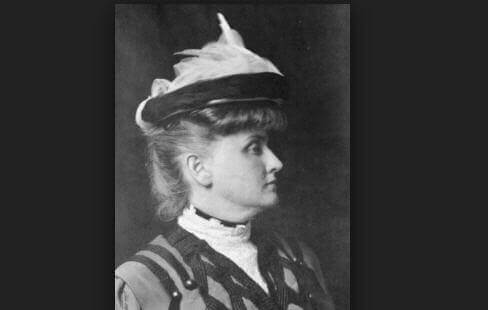 Gertrude Atherton; (1857-1948), American author. She was born Gertrude Franklin Horn, in San Francisco, on Oct. 30, 1857. She was educated at private schools in California and Kentucky. In 1876 she married George Henry Bowen Atherton, by whom she had two children. After her husband’s death in 1887, she traveled extensively and pursued a literary career, writing novels with varied backgrounds, ranging from ancient Greece, France, and Germany to the West Indies and California. She died in San Francisco on June 14, 1948.

Her most popular books include The Conqueror (1902), a fictional biography of Alexander Hamilton, for which she went to his birthplace in the West Indies to gather information, and Black Oxen (1923), a novel inspired by her own experience with the Steinach method of rejuvenation. Among her other works are The Doomswoman (1892), a novel about California in 1840; Before the Gringo Came (1894), short stories; Senator North (1900), a novel; The Bell in the Fog (1905), short stories; Rezanov (1906), a novel; California: An Intimate History (1914); The Immortal Marriage (1927), a story of personages of ancient Greece; Dido, Queen of Hearts (1929), a novel; Adventures of a Novelist (1932), an autobiography in which she revealed her dislike for the conventional; The Horn of Life (1942), a novel of San Francisco; Golden Gate Country (1945), a history; and My San Francisco (1946), a book of reminiscences.

Mrs. Atherton received the Legion of Honor in 1925 for her relief work in France during World War I. In 1947 she received a gold medal from the city of San Francisco. She was awarded honorary degrees by the University of California and by Mills College.