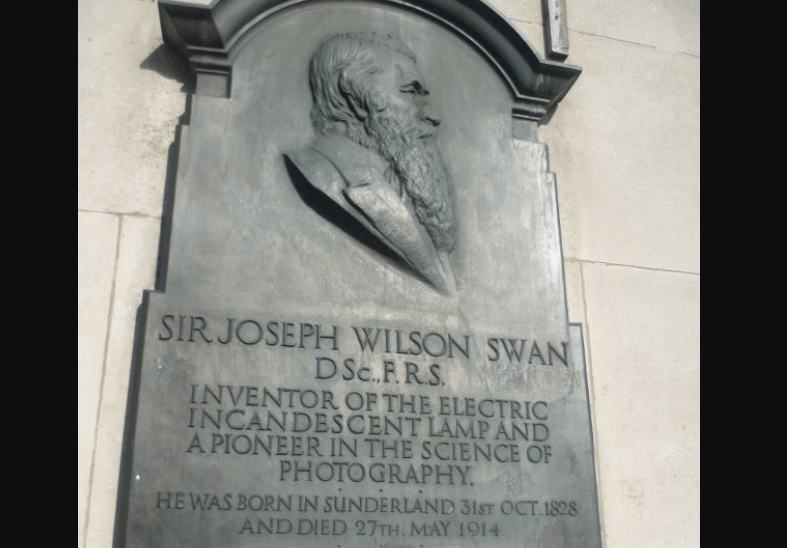 Joseph Swan; (1828-1914), English chemist and inventor, who made basic contributions to photography and electric lighting. He was born in Sunderland, Durham, on Oct. 31, 1828. Apprenticed to a local druggist, he later became a partner in a chemical firm.

Swan was granted his first patent in 1864 for a perfected “carbon process” for printing photographs with permanent pigments. He then adapted this process for printing from electro types. In 1877, soon after his firm began to make dry plates, Swan discovered an effect unnoticed until then-that the sensitivity of a photographic emulsion could be greatly increased or otherwise altered by controlling the temperature and duration of the heat applied in preparing it. General knowledge of this effect of ripening by heat was a key factor in the subsequent rapid improvement in plates, films, and papers. In 1879 he patented the first bromide paper.

Swan was the foremost rival of Edison in the development of the incandescent lamp. From 1848 to 1860, Swan made experimental lamps that lit dimly but burned out quickly for lack of a good vacuum. In 1877, using a better vacuum pump, he began the development of new lamps embodying features that were soon widely adopted. Among these were an all-glass, hermetically sealed bulb (1879) and a durable filament of carbonized cotton thread that had first been treated with sulfuric acid (1880). Swan formed a company to make his lamps, and in 1881 he amazed Londoners by lighting the Savoy Theatre with 1,200 of them. He was knighted in 1904. He died in Warlingham, Surrey, on May 27, 1914.