Franz Peter Schubert; (1797-1828), Austrian composer, who developed and brought to its highest form the German lied, or art song. Using verses by such authors as Goethe, Schiller, Heine, and Shakespeare, he achieved an exquisite fusion of poetry and music, in which the music brilliantly expresses and underscores the emotion and meaning of the words. In addition to art songs, Schubert also wrote masterful symphonies, chamber music, piano music, and church music. 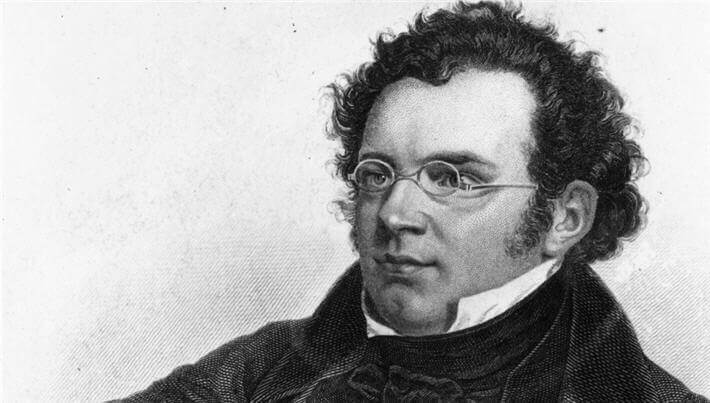 Schubert was born in Vienna on Jan. 31, 1797. His father, of Moravian peasant stock, was a schoolteacher in the Viennese suburb of Lichtenthal. His mother, a native of Silesia, had been a cook. Franz was the 13th of 14 children, nine of whom died in infancy.

Schubert’s first musical impressions were of the chamber music sessions of his father and older brothers, one of whom, Ferdinand, later became fairly well known as a composer of church music. Schubert received his first music instruction at home, starting piano lessons when he was six and violin lessons when he was eight. He was then turned over to the parish choirmaster, Michael Holzer, who taught him singing and music theory. When Franz was 11, he sang and played the violin in the parish church. He also made his first timid attempts to write music.

In October 1808, Schubert was sent to the Stadtkonvikt, a boarding school attached to the imperial court in Vienna. There, students were taught music as well as other subjects in return for their services as choristers. During his student days at the Stadtkonvikt, Schubert composed several works, among them a fantasia for piano duet (1810) and his first song Hagars Klage (1811). During his last months at the school and for some time after he left, he studied with the Italian composer Antonio Salieri.

Schubert’s mother died of typhus in 1812, and he left the Stadtkonvikt in 1813. He attended a teacher training school for about a year and in 1814 took a job as a teacher in the school in which his father also taught. Now he began to compose feverishly in every spare moment, between classes and at night. In the next two years he experimented with a great variety of musical forms, producing several chamber works, symphonies, Masses, operas, and songs. Among his most famous songs of this period are Gretchen am Spinnrade (1814) and Erlkonig (1815).

In 1816, Schubert was granted a leave of absence from his teaching job. A friend, Franz von Schober, arranged for lodgings for Schubert, who supported himself erratically by giving music lessons. Schober was one of several artist friends of Schubert who gave him financial assistance from time to time. However, Schubert’s financial difficulties did not prevent him from enjoying the lively bohemian literary, musical, and artistic life of Vienna. His friends often gathered to play his music. After Schober introduced the baritone Johann Michael Vogl to Schubert, the singer became a regular interpreter of Schubert’s songs at many of these gatherings, which became known as Schubertiads. Soon the songs were being sung throughout Vienna. One of the most beautiful songs written during this period is An die Musik (1817), to a text by Schober. Schubert went back to teaching in 1817 but resigned the next year.

In the summer of 1818, and again in 1824, Schubert was employed as music teacher to the family of Count Johann Esterhazy at their country estate in Hungary. Schubert’s enthusiasm for Hungarian folk music and gypsy airs dated from this time. Out of the experience came such works as the Divertissement a I’Hongroise (1824), a piano composition for four hands. In the fall of 1818, Schubert was commissioned to write an operetta, Die Ztvillingsbriider (first performed in 1820 with Vogl in the lead). During the summer of 1819 he wrote the famous Trout Quintet in A Major.

The year 1821 saw the first publication of any of Schubert’s compositions. Erlkonig appeared in April 1821, and thereafter his works were published regularly. In the following year he wrote one of his best-known orchestral works, the beautiful and haunting Unfinished Symphony. Through most of 1823, Schubert was 01, stricken with a venereal disease. Yet, though he was bedridden part of the time, he continued to compose, producing the great song cycle Die schone Mullerin, set to words by Wilhelm Miiller; the incidental music to Rosamunde; and two operas, Die Verschworenen and Fierrabras.

After spending the summer of 1824 with the Esterhazy family in Hungary, Schubert returned to Vienna refreshed. Among his compositions of 1824 and 1825 were the String Quartet in D Minor (Der Tod und das Mädchen), The Lady of the Lake songs, and the Piano Sonata in A Minor. In 1826, Schubert petitioned for the post of vice kapellmeister to the imperial court, but was not accepted. He suffered a great blow early in 1827 with the death of his lifelong idol, Beethoven. The two men met for the first and only time in March 1827, one week before Beethoven’s death. Schubert was a torchbearer at the funeral. In the summer of 1827 he was elected as a representative to the Vienna Philharmonic Society, an honor that gave him much pleasure. Among his most important works of 1827 are the magnificent song cycle Die Winterreise, set to words by Müller, and the Trio in E-Flat Major for piano, violin, and cello.

Schubert’s health had been declining since 1823, and as his condition worsened he suffered from attacks of anxiety and despondency. Fortunately, his creative powers seemed little affected by his bad health and impoverished circumstances. He wrote many of his most ambitious works in the last year of his life—the Symphony in C Major, known as the Great, the String Quintet in C Major, the cantata Miriams Siegesgesang, the Mass in E-Flat Major, and the beautiful song cycle Schwanengesang, containing such songs as Der Atlas and Der Doppelgänger, both to texts by Heinrich Heine. In March 1828 he arranged the only public concert of his works in his lifetime and enjoyed a great success.

In Qctober 1828, Schubert contracted typhoid fever. He died in Vienna on Nov. 19, 1828. In accordance with his wishes, he was buried near Beethoven in the Währing Cemetery. About 60 years later, the bodies of both composers were disinterred and reburied in the Central Cemetery of Vienna.