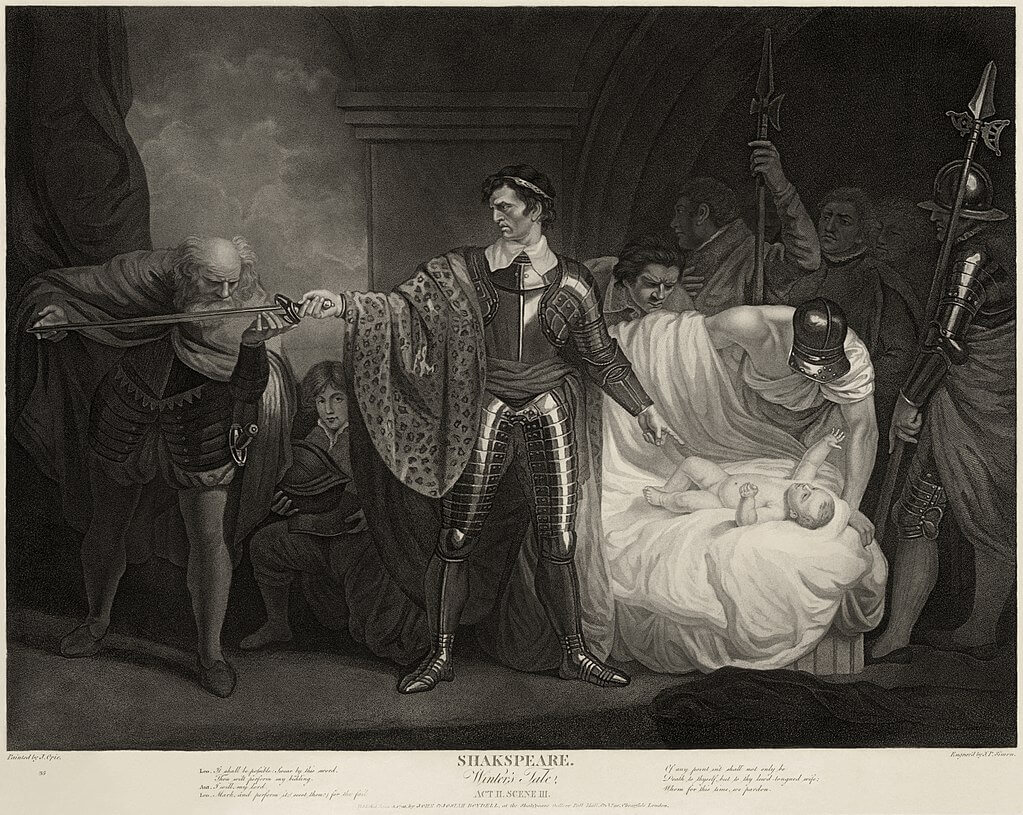 The Winter’s Tale; a tragicomedy by William Shakespeare, written about 1610-1611, produced in 1611 at the Globe Theatre and at court, and published in the folio of 1623. The source was a popular prose romance by Robert Greene, Pandosto: the Triumph of Time (1588). Leontes, king of Sicily, unwarrantedly jealous of the relations between his wife Hermione and his friend Polixenes, king of Bohemia, throws Hermione into prison, where she bears a daughter; Polixenes escapes.

Paulina, wife of Antigonus, one of the Sicilian courtiers, brings the baby to Leontes, who orders her abandoned and refuses to believe in his queen’s innocence until his son Mamillius dies and Paulina reports Hermi-one’s death. The abandoned infant daughter is found and reared by a shepherd in Bohemia where, as Perdita, she and Prince Florizel fall in love. Denounced by Polixenes, they flee to Sicily, where their identities are discovered. Leontes, still overcome with remorse, is invited by Paulina to see a statue of his wife.

The statue proves to be the living Hermione, and all are joyfully reunited. Paulina, the rogue Autolycus, the pastoral episodes (reminiscent of Warwickshire), and the preservation of Hermione are Shakespeare’s inventions to provide comedy and a happy ending; Greene’s euphuized language is converted into lively prose and a verse which runs the gamut from the tortured staccato of Leontes to the lyrical utterances of the young lovers.

Criticism has stressed the insufficient motivation of Leontes’ jealousy, the lapse of 16 years between Acts III and IV, the shift of interest in characters, and the surprise ending; but all this fails to take into account the play’s title and type. A winter’s tale was an old wives’ tale, serious but not tragic, full of strange marvels and varied action, told around the hearth on winter nights; and tragicomedy demanded swift and violent emotions and a happy ending to its fantastic narrative.

There is little pretense to realism: Leontes’ repentance is as long as his jealousy is sudden, a courtier is eaten by a bear, a shepherdess is really a princess, and a dead woman comes to life. The unity is not one of plot but of atmosphere. Shakespeare gave his “scene such growing/As you had slept between”—between, that is, the waking, dozing, and dreaming which accompanied a winter’s tale.

The playwright’s skill and success are attested by the six court performances before 1642. The sophisticated Restoration would have none of the play, but it was revived in 1741, adapted as Florizel and Perdita by David Garrick, restored in the 19th century—Mary Anderson doubled as Hermione and Perdita in 1887—and is now frequently on the stage.