Carbon;symbol C, is a nonmetallic chemical element whose compounds are very widely distributed in nature. There are three elementary forms of carbon, of which two—graphite and diamond—are crystalline allotropes. The other, amorphous, form includes several impure substances, such as coal, which originated in plant life. Carbon compounds make up petroleum and natural gas and occur in oil shale. Other carbon compounds are found in limestone and dolomite rock. Still others occur in solution in ground water, lakes, streams, and in the oceans. All organic compounds contain carbon, and large and complicated carbon compounds form the complex structural basis of living matter. 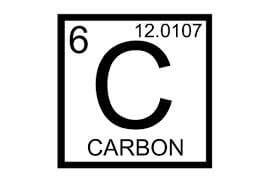 Graphite and diamond, the crystalline forms of carbon, are discussed in separate articles. Some of the less well crystallized forms of carbon, such as charcoal, are used as adsorbents for poisonous gases and for the removal of colored impurities in such materials as oils and syrups. The extremely porous structure of such carbon exposes a very large surface area per unit mass. The unbalanced electronic attraction of surface carbon atoms draws and holds foreign materials, especially those with polar molecules. When the adsorbing surface becomes saturated with foreign matter, it can often be cleaned by heat or the action of steam. Although such forms of carbon may be described as amorphous, they do show some evidence of graphitic structure. Carbon is also a valuable reducing agent for the ores of many common metals.

Carbon is a nonmetallic element of atomic number 6. It melts at 3550° C (6454° F), although it begins to sublime at 3500° C (6364° F). Its boiling point is about 4827° C (8750° F). The specific gravity of carbon, in the form of graphite, is 2.26. In its chemical reactions, carbon commonly exhibits a valence of 4, although it may show valences of 2 and 3. It is inert to most forms of chemical attack at ordinary temperatures and is virtually insoluble in most common solvents. At elevated temperatures all forms of carbon will oxidize (burn) to form carbon dioxide, although the kindling temperatures of diamond and graphite are quite high.

There are seven isotopes of carbon ranging from 10C to 16C. Only two of these isotopes, I2C and 13C, are stable. Natural carbon, which is a mixture of the stable isotopes, consists of 98.89% ,2C and 1.11% “C, and has an atomic mass of 12.01115. The most nearly stable of the radioactive isotopes is 14C, which has a half-life of 5,770 years and is used in archaeology for dating specimens. In 1962 the isotope 12C became the international unit for atomic mass measurement. It was assigned a mass of 12.00000 units. 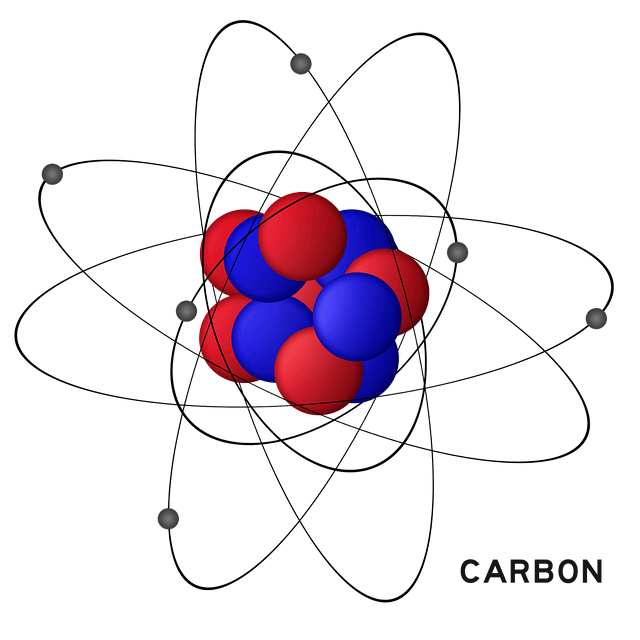 The carbon atom has four outer-level electrons, two in the 2s sublevel and one each in two orbitals of the 2p sublevel. The spectral notation for this structure is 2s^2, 2p^2. In bonding with other atoms the carbon atom behaves as if one of the 2s electrons moves into rthe unoccupied 2p orbital. There are then four unpaired electrons in four orbitals which bear the same relationship to the atom. This behavior is called sp^3 hybridization.

Graphite, which is the most stable form of carbon, consists of plates of six carbon atom rings in which each atom forms covalent bonds with three others. Three electrons from each atom are thus bound, and the fourth electron is free to move from atom to atom. These mobile electrons give graphite the property of electrical conductivity.

Diamond has a crystal structure consisting of regular tetrahedra with a carbon atom at each vertex. Each carbon atom is linked to four others by covalent bonds that bind all four outer electrons. Diamond is a nonconductor of electricity.

There are more than a million known compounds of carbon. These may be divided into the inorganic carbon compounds and the organic compounds.

Organic compounds may be divided into two groups—the aliphatic compounds, which are in the form of continuous or branched chains, and the aromatic compounds, in which carbon atoms in a six-member ringed structure form part of the molecule. One class of organic compounds contains only carbon and hydrogen atoms; these compounds are called hydrocarbons. In the simplest saturated hydrocarbon, methane (CH4), the electron in each outer level orbital of the carbon atom is paired with an electron from a hydrogen atom, and a tetrahedral structure of four hydrogen atoms around the carbon results. The effective angle between any two of these covalent bonds is 109° 28′.

Ethene (C2H4, or H2C=CH2) is the simplest member of a family of unsaturated hydrocarbons in which double bonding occurs. Three of the unpaired electrons of each carbon seem to be directed toward corners of an equilateral triangle. Two of these form bonds with hydrogen atoms and the third is shared with an electron of the other carbon atom, forming the principal, or sigma, bond between them. The fourth orbitals of the two carbon atoms unite to form a secondary, or pi, bond between the atoms.

The sigma bond serves to hold the two atoms together, and the pi bond, which is more exposed, is open to chemical attack and seems to account for the increased chemical activity of unsaturated hydrocarbons.

In ethyne (C2H2, or HC=CH), a triply bonded hydrocarbon, one orbital from each carbon atom is combined to produce the sigma bond. An electron orbital, 180° removed, bonds a hydrogen atom on each carbon atom. The two remaining orbitals of each carbon atom produce two pi bonds, which are quite receptive to chemical attack.

The basic structure of the aromatic hydrocarbons is the six-member carbon ring.

Two orbitals of each carbon atom bond to adjacent carbon atoms, producing sigma bonds, and the third orbital bonds a hydrogen atom. The fourth orbitals of the carbon atom, which are represented in the diagram by the circle, are available to form pi bonds between them. These aromatic pi bonds do not add atoms or groups of atoms as readily as those in chain hydrocarbons.