What are the works of Rembrandt? Information about the paintings, biblical subjects, etching and drawings of Rembrandt.

Rembrandt was a remarkably prolific and versatile painter and etcher. No certain count is possible, since many paintings by his apprentices have been ascribed to him. We can only conjecture that about 700 oil paintings remain to us. Not less than 500 etchings came from the press which he himself maintained and often operated.

Although every one of Rembrandt’s canvases bears the immutable stamp of his genius and personality, his techniques were varied. Sometimes he worked in large, slashing lines and intense contrasts in color and texture, and sometimes he finished his surfaces as though he were making a miniature. He used every method of laying on his paint, from the most delicate washes which permit the canvas to show through to the heaviest impasto (paint laid on in depth and molded with brush, finger, brush handle, or palette knife). 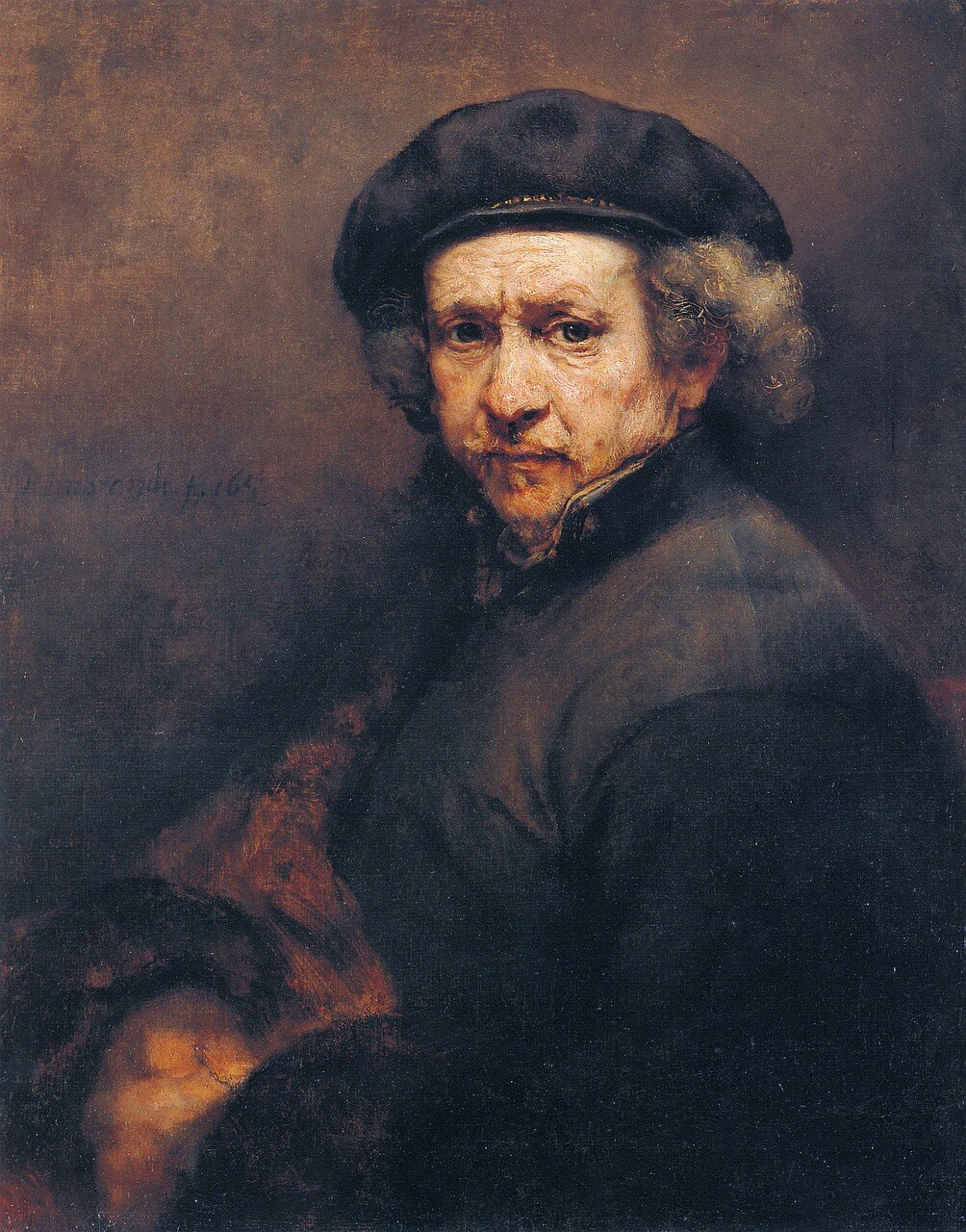 To the time of his death Rembrandt used himself as a subject, not out of vanity—the portraits are pitiless and record every wrinkle, broken tooth, and patch of graying hair—but because he was a model always available and possibly because, in studying his own person, he could study the tragic history of every man. His family was another unfailing source of subject matter; mother, sister, father, wife, mistress, son, and brother are painted repeatedly. The splendid self-portrait in the Frick Museum, New York City (1658), is one of a series of 62, all of which are prize possessions of museums throughout the world. There is a touching picture of his father in the Boston Museum of Fine Arts. His mother’s aged and intricately wrinkled face shows itself bent over the Bible in his painting of an Old Woman Reading (1631; Rijksmuseum), and he painted his sister so often that it is difficult to know when she ceased to be his favorite young woman model and yielded her place to Saskia, since some of the portraits seem to resemble them both.

One portrait of Saskia is in the Widener Collection in the National Gallery in Washington, D.C., and one of those in which he painted her as the goddess Flora is in the Stettenheim Collection in New York City. The Metropolitan Museum owns a moving likeness of the aging Hendrickje (1660), and a beautiful canvas of the boy Titus (1655). Three portraits of Rembrandt’s brother Adriaen make it hard to believe that the celebrated Man with the Golden Helmet (c. 1651 ; Kaiser Friedrich Museum, Berlin) is anyone but him.

A large part of Rembrandt’s income, like that of any contemporary Dutch artist, came from portrait commissions. In these he was sometimes merely a virtuoso, concerned as much with lace and pearls as with the vapid faces he had to paint. In others, like the profound Man with a Magnifying Glass (c. 1651; Metropolitan Museum), his psychological and spiritual intent throws the marvels of his technique into the shade. He often painted friends, servants, faces seen in the city. Still oftener, because his house was in the Jewish section, he painted the haunting, wise, suffering faces of Jews driven from Spain, Portugal, Germany, and Poland to find refuge in charitable and open-minded Amsterdam.

Rembrandt’s landscapes are few, but they are rich in suggestion of the majesty and mystery of uninhabited space. Such subjects as he chose from legend or history, very popular sources in his day, are even fewer; his Aristotle Contemplating the Bust of Homer is, with Dana’e (1636; Hermitage, Leningrad), the best in this category.

It is noteworthy that Rembrandt should have painted about 150 Biblical subjects. In an austerely Protestant country, the only market was the relatively rare private buyer. Cardinals, bishops, and archbishops eagerly bought the works of his contemporary Rubens at good prices. But the Protestant churches of the Dutch Republic were severely whitewashed, and it was assumed that pictures interfered with meditation, so that we may infer that Rembrandt’s reason for painting Old and New Testament scenes was a deep affinity with the Bible. Though he belonged to no congregation, he had close friendships with pastors of the Mennonite sect, which adhered to the tenets of the primitive Christian community.

He was also closely attached to members of the Jewish community, and his Old Testament paintings show a more than superficial knowledge of Jewish lore. Samson and Tobit (Tobias) attracted him in his youth. Bathsheba, Susanna, Esther Joseph, and Jacob held him in his later years. The Good Samaritan, Christ at Emmaus, the Crucifixion and the Resurrection, and the Healing of the Sick were recurring themes. In 1660 he was working on St. Peter Denying Christ (Rijksmuseum) ; and Simeon Receiving the Christ Child was probably his last work, barely begun before his death. From 1640, most of the models for his Biblical works were Jews, a fact we take for granted today but an innovation in his own* time, when the influence of the Italian School gave a Mediterranean beauty to the humble folk among whom Christ lived and when Rubens was painting the Magdalen as an opulent beauty of the salons. 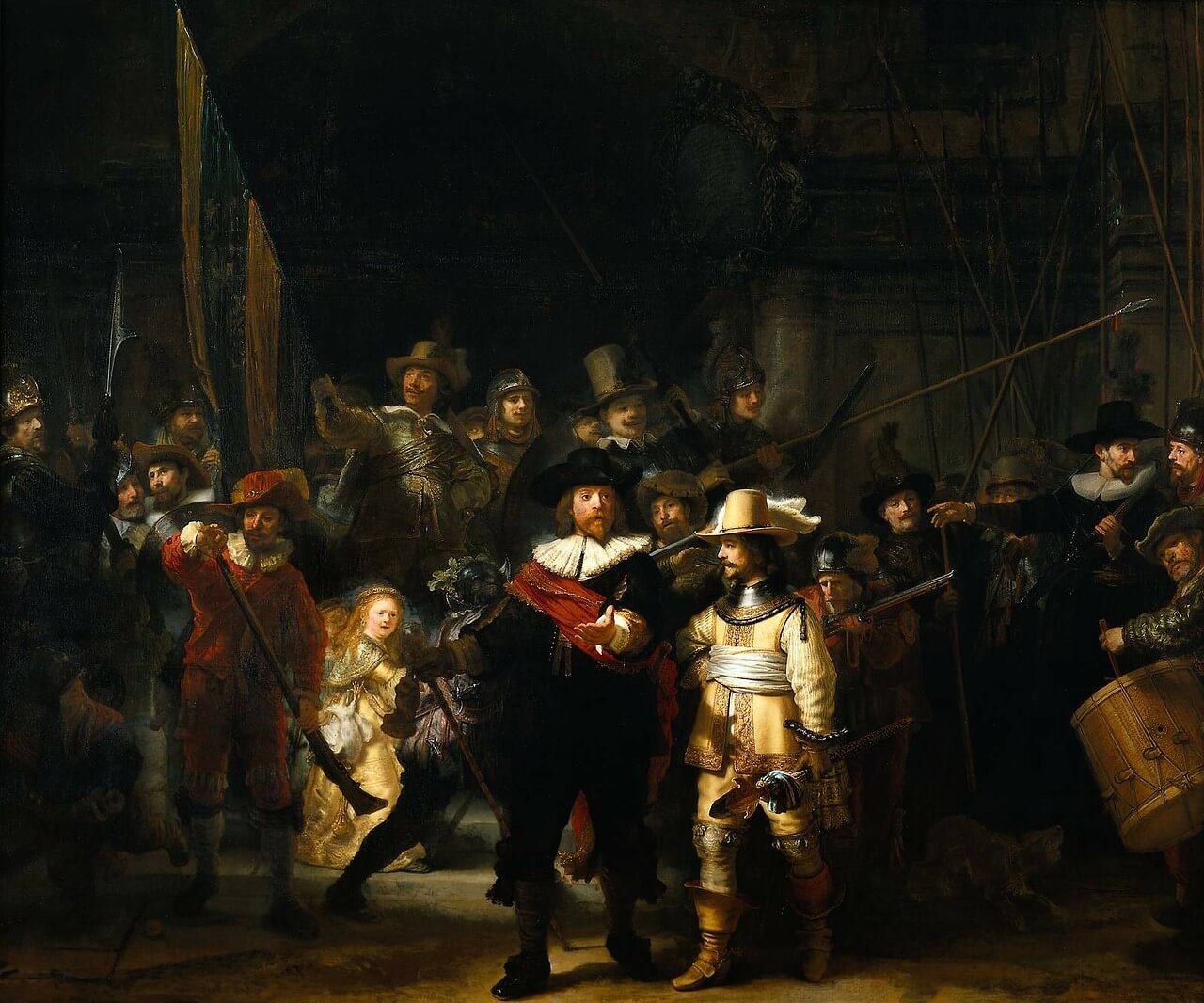 Practically every one of these Biblical canvases has its own startlingly direct appeal; it is as if Rembrandt negated the centuries and made the events happen before our eyes. Among the most notable are: Jacob Wrestling with the Angel (c. 1660-1661 ; Kaiser Friedrich Museum) ; Abraham’s Sacrifice (1635; Hermitage); Bathsheba (1654; Louvre, Paris) ; The Return of the Prodigal Son (c. 1668-1669; Hermitage) ; and the gentle portrait study of the Head of Christ (Metropolitan Museum). To these must be added the famous “Hundred Guilder Print” Christ Healing the Sick (date disputed), the crown of his work in etching, in which psychological and religious insight and technical mastery combine to produce a masterpiece.

In Rembrandt’s own time, his reputation as an etcher was greater throughout Europe than his reputation as a painter. It was a time when every family wished to own, if not a painting, at least an etching to hang in the parlor. It was also a time when amateur collectors kept drawers filled with etchings which they could enjoy themselves and show with pride to their guests. Rembrandt’s etchings circulated throughout Europe and were particularly valued because there were various stages or versions of the best of them. Never content with the copper plate from which he printed, he kept changing it, sometimes in detail and sometimes in a broad over-all fashion. Only he or the best of his apprentices made the prints.

Most of them were small, and the care and skill involved in the minute detail were almost unbelievable. They are as varied in technique as the paintings. Some consist of the fewest possible number of lines, and others are minutely crosshatched in the most exquisite detail. In his day they were famous for their “velvety blacks”—shadows deep but still transparent enough to permit a suggestion of indistinct shapes to come through. In his last years Rembrandt stopped etching altogether, possibly because his sight had begun to fail.

The number of Rembrandt’s drawings must have been prodigious. Some have been preserved, and are extraordinary for their sure and summary means of getting across the most complex ideas with the greatest simplicity; but in his time drawings were considered merely exploratory exercises done before painting or etching, so we can conclude that hundreds were used as plans and then thrown away.

Fashions in painting and Rembrandt’s own inner concepts of his aims as a painter did not usually coincide. In his earlier years, while he was studying with Lastman and lived happily with Saskia, his obsession with splendor and dramatic emotion coincided with that of the great international baroque painters then in high fashion, and he rode the crest of the wave. The so-called Night Watch was an apotheosis of the baroque; in it he managed to satisfy the demand for action, agitated line, and rich trappings; but he also combined the fantastical baroque with his own concept of reality. To be true to nature and reality as he saw it was his abiding principle, and some change in his life after Saskia’s death made him see nature and reality as less and less splendid and more and more tragic and profound.

Though he now and again returned to the Oriental magnificence, the theatrical attitudes, and the suggestion of agitated movement that had fascinated him earlier, the main trend of his work was toward the quiet, the inward, the deep. He painted the body as an envelope of the spirit; and the spirit, as he saw it in his maturity, was often burdened with sorrow and touched with the shadow of death. As he grew more involved in his search for the spirit, he grew bolder in the techniques through which he hoped to render it. Julius Civilis and several late self-portraits have a daring experimental quality that is almost contemporary. 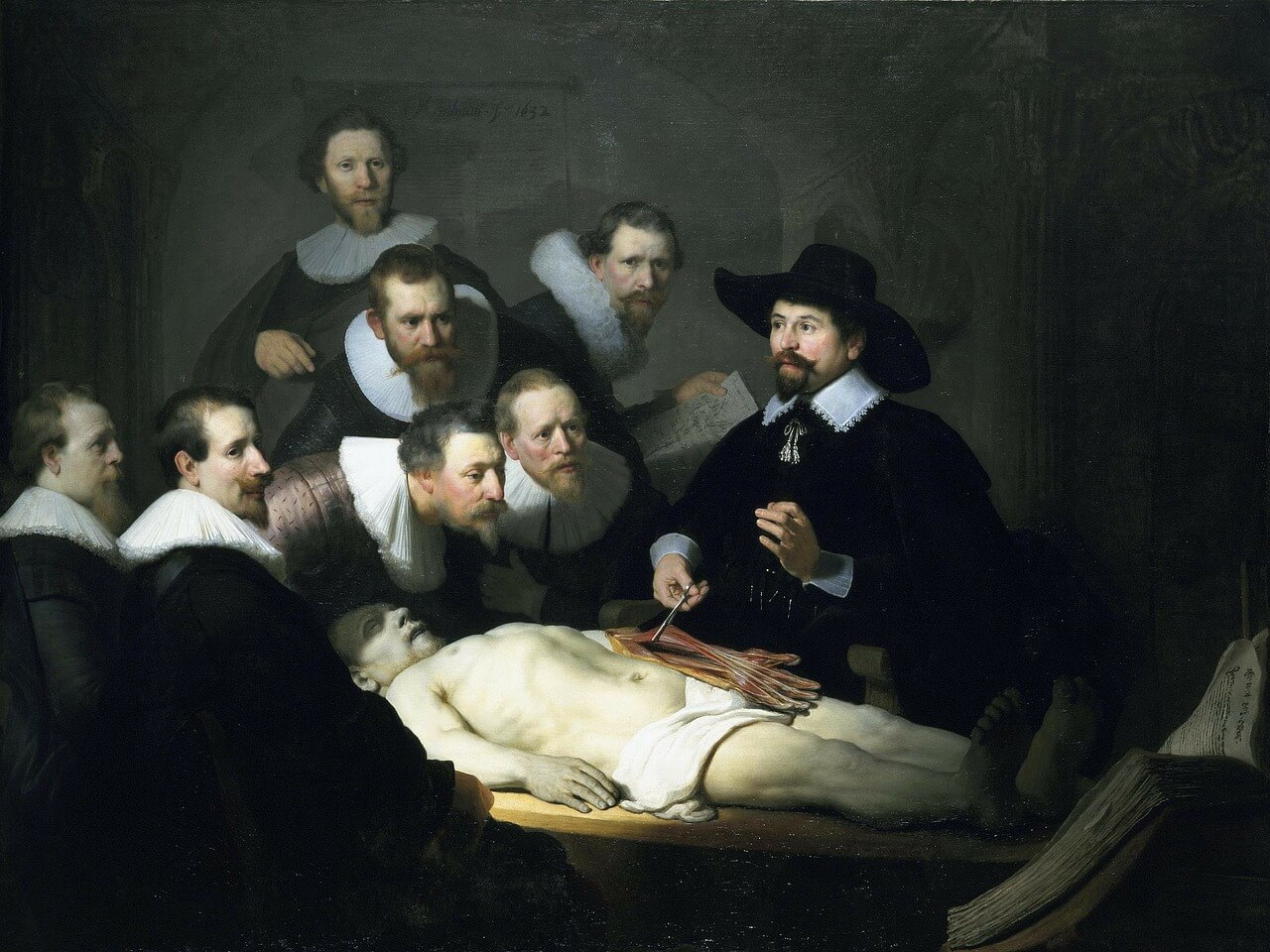 In 1656, when Rembrandt was bankrupt and at his lowest ebb, the baroque had begun to lose its hold in Europe and a new style was in fashion in Amsterdam—the smooth, silky, flattering style evolved by Anthony van Dyck at the court of Charles I of England, a style which was later to yield such masterpieces as those of Jan Vermeer of Delft. But the new influence was uncongenial to Rembrandt. How could he have painted a silky surface when all his life he had laid on paint as he wished ? How could he, who had spent his life in gigantic labors and violent struggles, have confined his vision of the world to little, smooth pictures of some serene domestic scene? While the new style developed, he went on evolving his own style, which only a few people, like Dr. Tulp and the Six family, followed with enthusiasm.

Yet now, when we look at those paintings of his —The Jewish Bride (c. 1665; Rijksmuseum), the Family Portrait (c. 1667-1669 ; Herzog Anton Ulrich Museum, Brunswick), The Prodigal Son, and the final self-portraits—we see that it was in his last years, in sickness, poverty, loss, and loneliness, that his greatest work was done. The technique is daring ; the strokes are the almost careless strokes of the self-confident master ; the knowledge of man and his doings seems to pass beyond the confines of this earth ; the figures exist against a shadowy background that suggests infinite space or the blackness of death ; and yet the pictures glitter with an unworldly splendor that suggests the indestructibility of the spiritual essence. Their closest affinity is with the later works of Ludwig van Beethoven, in which life and death, exaltation and sorrow, resignation and chastened delight, all merge in a final affirmation.

Rembrandt’s reputation, which was in decline when he died, began to emerge strongly again in the middle of the 18th century. Since then it has moved only upward. He speaks to all men—to the contemporary artist through his inimitable technique, to the unlettered through his warmth and immediacy, to the philosopher through his deep revelation of the human spirit. Today he is everyman’s painter, and it is hard to imagine a day when his canvases, with their mastery, their splendor, and their profundity, will cease to draw and stir the minds of men.