Who was Voltaire? What did Voltaire do? Information on Voltaire biography, life story, works, writings and philosophy.

Voltaire; (pseudonym of Jean François Arouet), French author, philosopher, and apostle of free thought: b. Paris, Nov. 21, 1694; d. there, May 30, 1778. He came from a cultured middle-class family, was educated by the Jesuits at the College Louis-le-Grand, steeped in the classics, and attracted early by a literary career, for which he gave up the study of law. His health was poor and he was thus by necessity and by inclination a temperate man at a time when pleasure was openly worshipped, during the years of gay relaxation which followed the death of Louis XIV (1715). He was twice confined to the Bastille, most unjustly, in 1717 and in 1726. That experience strengthened his passion for justice and he decided to uphold the rights of men of letters against the arbitrary power of the king and of the nobles.

Upon Voltaire’s liberation in 1726, he went over to England where he spent three important years. He discovered William Shakespeare and much of English literature, he admired Isaac Newton, and he envied the freedom of thought and the commercial prosperity of England. He praised England in contrast with France in vivid prose in his Lettres philosophiques (known also as Lettres sur les Anglais, 1734; English version, 1733). The book was forbidden in Paris and Voltaire had to exile himself for a while. He chose to live until 1749 at Cirey in Lorraine, close to the border and thus able to escape if his writings were judged subversive. 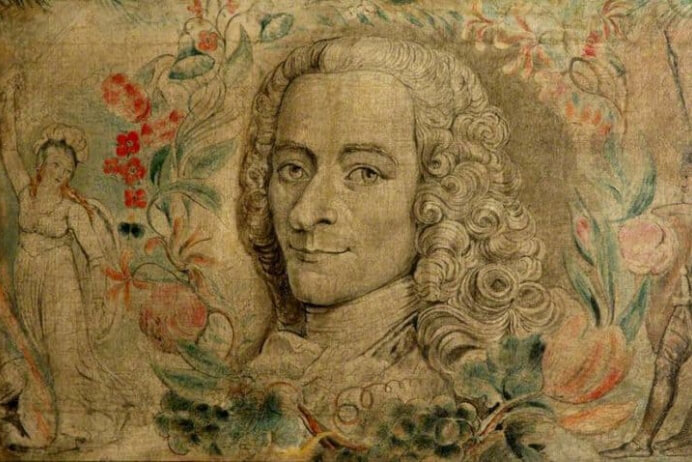 In 1749 he lost his intimate friend, the Marchioness of Châtelet, and accepted the often repeated invitation of Frederick the Great of Prussia to live at his court at Potsdam. Voltaire was then a very skillful poet, both serious and playful, the author of some good tragedies— which were considered in his day worthy of Jean Baptiste Racine (Brutus, 1730; Zaire, 1732; Mahomet, 1742; Merope, 1743) but are no longer performed today—a moralist, a historian, and a polemist.

He was curious of everything, vivacious, nervous, and at times egotistic. His friendship with Frederick II soon deteriorated into unpleasantness, and the king failed to behave philosophically or even courteously. Voltaire left in 1753, took to a wandering life for some years, then lived in Switzerland near Geneva and in 1758 established his residence at Ferney (now in France, on the Swiss border outside Geneva) with his niece, Madame Deniş. Ferney was not under the jurisdiction of the French king and Voltaire enjoyed security there. His writings then became more outspoken, and their author enjoyed universal fame: kings, noblemen, foreign visitors, all flocked to Ferney to pay homage to the sovereign of literature. A great number of persons corresponded with Voltaire, who stands supreme among the letter writers of all ages.

He first produced works of history:

Le Siecle de Louis XIV (1751), Essai sur les moeurs (1753, 1756). They constitute the first modern historical treatises composed according to a critical method and with a gift for analytical clarity. Voltaire does not bring the past back to life with the imaginative power which later historians will possess; but the shrewdly discriminates among the causes and the consequences of events. He moreover lays the stress upon civilization and upon the manners, beliefs, and daily lives of the people, forsaking the earlier exclusive emphasis on kings and on wars. His history of mankind (Essai sur les moeurs) is not impartial: Voltaire decreases the role traditionally granted to the Jewish people and underlines that of Asiatic nations. History to him is, or should be, the progressive victory of enlightenment and of fraternity over ignorance, fanaticism, and evil.

At the same time, Voltaire composed philosophical poetry: Poeme sur la loi naturelle (1756), inspired in part by Alexander Pope’s Essay on Man, and Poeme sur le desastre de Lisbonne (1756) which treats of the problem of evil in nature as posed in 1755 by the catastrophic Lisbon earthquake. Voltaire scathingly ridiculed the systematic optimism which sees every event as willed by God and as the condition for a greater good. He prefers to believe that all is not well today, but may be better some day if we take up arms vigorously against natural and human evils.

But Voltaire is incomparably greater as a prose writer than as a poet: he lacked the gift of imagery and the sense for half shades and mysterious suggestiveness which we require today from poetry. His masterpieces are, along with his witty, vivacious letters, his novels. Zadig (1747) is an allegorical Oriental tale; Micromegas (1752) is a delightful Swiftian philosophical fantasy; Candide (1759) is Voltaire’s highest achievement. It is a satire on the previous adventure novels of the age, an attack upon the claims of unlimited optimism, an entertaining and tat times very free story of a candid and gullible young man gradually shedding all his illusions and concluding in the end that the best is to “cultivate one’s garden” without excessive idealisin and without the dubious assistance of nebulous metaphysics or of a God who helps best those who help themselves.

Voltaire’s activity was tireless: he was an eager contributor to the great Encyclopedie started by his friends Jean Le Rond dAlembert and Deniş Diderot.

He published in 1763 an important treatise on tolerance and in 1764 the famous and influential Dictionnaire philosophique. He poured out a considerable number of other treatises, pamphlets, tales, and ironical works in which he expressed his views on the abuses which he condemned and on how to put an end to injustice, arbitrary power, and the greed of the privileged ones which reduces the underprivileged to misery.

Voltaire’s philosophy is not original or profound: some historians of thought even refuse to call him a philosopher, for he did not formulate a coherent system claiming to explain the whole universe. But Voltaire repudiated such systems as logical but ineffective structures which closed the eyes of many to the actual state of things. Voltaire’s thought is pragmatic and practical. He believes in God and calls himself a theist: the world is a complex clock which cannot be explained without a clockmaker. But Voltaire’s God does not intervene in the course of events. There is no Providence, no miracle, no divine revelation.

Christ is left out of Voltaire’s philosophical outlook; the Scriptures are far from revered by the Frenchman’s irony; immortality counts but little or is scorned as a selfish illusion of man’s pride. Voltaire’s creed is natural religion, that is, religion viewed as equivalent to morality and reduced to the self-evident truths of justice, goodness, and truth. God’s only advice to man could be: “Be just.” Our service is to humanity as a whole. Fanaticism is the most dangerous of ali evils, and religious intolerance and the wars which it fosters must be eradicated. Hence Voltaire’s war cry: “Ecraser l’infâme.” The infamous foe to be crushed is Roman Catholic fanaticism, from which Voltaire and his friends, the “philosophes” of the 18th century, had to suffer most. For Voltaire lived in an age when the press did not exist, thought was not free, and men were not equals before civil law.

Voltaire was not content with writing intelligent and witty works.

Several times he intervened courageously to save freethinkers or Protestants martyred or persecuted—to rehabilitate Frenchmen whom a partial justice had gravely wronged. He took an active interest in political economy, in social reform, in improving the lot of the common man through better agriculture and expanding industry.

Much maligned by his enemies, sometimes too quick tempered and addicted to ferocious polemics, forced to wear masks and to resort to duplicity by the backward laws of his age, Voltaire has often been misjudged by posterity. He was a fighter, and has not been easily forgiven for the skill with which he attacked the excesses of religion. Yet he did more good with his pen than perhaps any other writer. He taught the virtue of doubt which should precede, examine, and strengthen positive faith. He promoted civilization and humanism, and helped weaken man’s inhumanity to man. When he died in 1778, he was mourned by the whole of Europe. During the Revolution, his ashes were laid to rest in the Paris Pantheon.