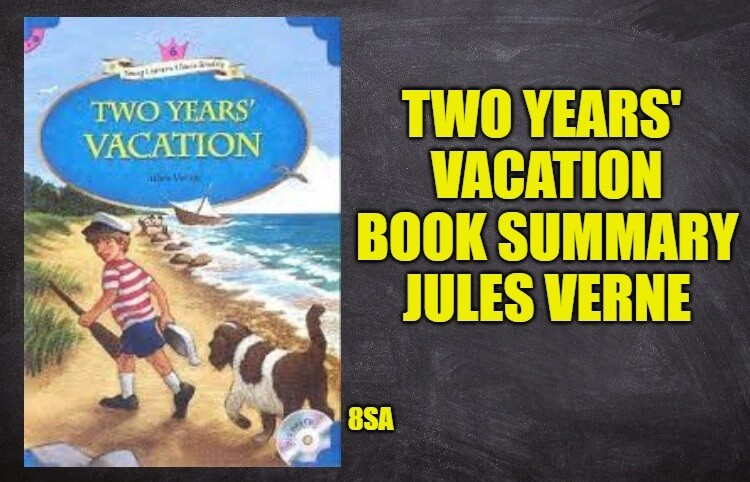 Two Years’ Vacation (Deux ans de vacances) is a novel written by the French Jules Verne, pre-published in installments in the Magasin d’Éducation et de Récréation from January 1 to December 15, 1888 and published in two volumes on June 18 and November 8 of the same year.

Fifteen boys and children suffer a maritime accident that throws them to a desert island, where with intelligence and courage they will manage to survive, face an adverse situation and defeat dangerous criminals.

A group of fifteen students (the majority of English origin, except for the French Briant and Jacques and the American Gordon) from the Chairman’s College in Auckland (New Zealand) board the schooner Sloughi to celebrate the end of the school year. However, the night before the trip begins, a mysterious incident causes the moorings to be loosened when all the sailors are ashore and the students are on board, at the same time that a gale force wind begins to blow, pushing the ship to the east. . Unable to control the ship, the young people are forced to let themselves be carried away by the wind trying to keep it afloat: after twenty-two days of sea travel, the ship ends up running aground near a desert island.

The students, getting used to the idea that they may be on the island for a long time until someone rescues them, manage to settle on the island, taking advantage of a cavern left behind by a previous castaway. After exploring part of the island, they name it “Chairman Island” in honor of their school.

Despite the circumstances, there are quarrels in the group. Briant, who soon emerges as the leader of the group due to his willfulness and good work, often comes across the strenuous opposition of Doniphan, who shows envy at the popularity of the young Frenchman and rejects any attempt by Briant to soften the problems. The situation with the supplies is always on the lookout, although the joint work of all the children and adolescents allows them to always be above the difficulties.

However, after Briant is elected leader of the group, Doniphan, unable to accept his rival’s leadership, decides to go to the other side of the island with his cousin Cross and his friends Webb and Wilcox. During the four’s absence, the teens decide to assemble a large kite that can be used to create a large signal to attract the attention of passing ships, but these plans are interrupted when they find a woman named Kate near their cave, which warns them of a danger: a ship called the Severn suffered a mutiny at the hands of a group of men who intended to use the ship for the slave trade, but a strong storm sank the ship, leaving only some of the mutineers alive , Kate and the ship’s boatswain, Evans. Kate managed to escape the mutineers during the distraction of reaching the island, but Evans is still in the hands of the mutineers, who are on the east side of the island. Briant runs to find Doniphan and his friends, saving the former from a panther attack before Cross fires his gun (which would have drawn the mutineers). Amazed that Briant was willing to face death to save him, Doniphan decides to change his mind, and the group returns safely to the cave.

In order to try to find out where the mutineers are, Briant decides to expand the kite so that he can carry a passenger: when the time comes, Jacques volunteers for the dangerous feat. Asked why, Jacques confesses that he was the one who released the Sloughi’s moorings as part of a joke, not knowing that it would lead to the terrible journey across the Pacific. However, Briant is the one who ends up going up with the kite, discovering not only that the mutineers are closer than expected, but also that there are islands nearby. Shortly after, during a chaotic night, Evans manages to escape his captors and reunite with the schoolchildren and Kate, bringing them up to date on the situation and revealing that Chairman Island is known as Hanover Island, and its relative proximity to the American continent would allow them to return. to home.

The mutineers try to infiltrate two of their men among the young men, but their plan is ruined because they are aware of their identity: one of them, Forbes, is captured and interrogated, while the other escapes, alerting the mutineers of the failure. Evans and the youngsters prepare for an all-out brawl. Briant, exploring for prints, is attacked by one of the mutineers, and Doniphan saves his life by getting between them and getting stabbed in the chest, while the rest attack the cave: Forbes dies saving Kate from being killed, and the other mutineers are killed in the fight or flee.

While they do what they can to help Doniphan recover from his serious injuries, Evans leads some of the young men to recover the boat in which the mutineers came to the island. Luckily, the boat is big enough for all the young people and the two adults to travel in it together with enough food. After planning everything, they go to sea and travel north in search of a station from which they can request repatriation, but luckily they come across the American ocean liner Grafton, whose captain has no qualms about deviating from his route to be able to carry everyone to Auckland, where they are greeted with great joy by their families, while Kate and Evans receive great thanks for helping them.