CELLULOSE, is the principal structural material in the celi walls of land plants. Cotton fiber is över 90% cellulose; wood, roughly 50%; straw, 30%. Cellulose occurs commonly in useful form in such seed fibers as cotton and kapok; in such stem (bast) fibers as flax, ramie, jüte, and hemp; and in wood, bagasse, rice hulls, and various other plant products. Many useful products, such as plastics or fabrics, are derived from cellulose, but the manufacture of paper is the largest single commercial use of cellulose.

An analysis of cellulose shows it to contain 44.4% carbon, 6.2% hydrogen, and 49.4% oxygen. This analysis suggests the empirical formula

. Pure cellulose can be hydrolyzed to form D-glucose,

, with a yield of about 95%. These and other studies indicate that the structural unit of cellulose is anhydroglucose,

, that is, D-glucose minus a water molecule (

The structure within the white area of the accompanying illustration of the cellulose molecule is the anhydroglucose unit. The value of h varies from 600 to 1,000 in wood pulp to more than 3,500 in cotton fibers. Commercially regenerated cellulose, which is brought into solution and then resolidified, is believed to be degraded to the extent that it retains 600 to 1,000 anhydroglucose units per chain. 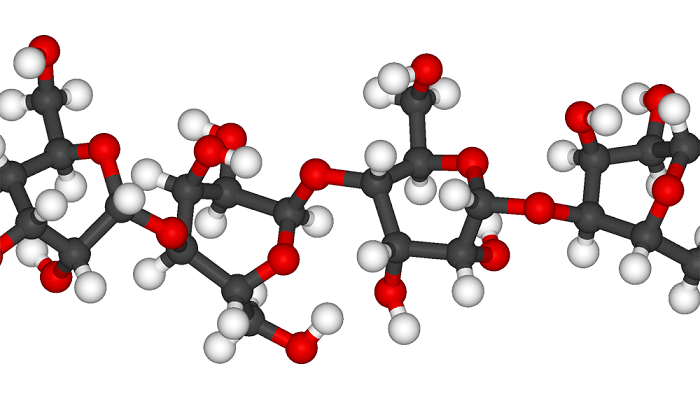 The beta-glucoside linkage of cellulose differs from the alpha-glucoside linkage found in starch only in the three-dimensional arrangements of the groups attached to the carbon atoms involved iri the joiniııg of adjacent anhydroglucose units. This beta linkage can be hydrolyzed and broken by the microorganisms existing in the digestive tracts of herbivorous animals. The process of digestion forms D-glucose, which is then available to the animal as a food material. Humans and carnivorous animals lack the enzyme supply necessary for the hydrolysis of the beta linkage. They have instead only the enzymes that are able to hydrolyze the alphaglucoside linkage of starch and therefore cannot digest cellulose.

Cellulose is formed in plants by the process of photosynthesis, a complex series of steps which is stili imperfectly understood. As a result of photosynthesis, carbon dioxide and water are combined with the help of enzymes to form glucose; the glucose units are then further combined into carbohydrate structures, of which starch and cellulose are examples.

The chemical changes of carbohydrate formation are endothermic (“energy absorbing”) in balance, and the energy absorbed from sunlight is stored in plants in the form of chemical energy. It may be released either through the digestion and metabolism of living organisms or, in the form of heat, through the burning of wood, coal, or other plant products.

X-ray diffraction studies have shown that cellulose fibers contain long, overlapping microfibrils, or chains, that are held to each other by van der Waals’ forces and by hydrogen bonding . Aggregates of these chains form strong, pliable plant fibers. The chains form chance groupings of crystalline regions separated by noncrystalline, or amorphous, regions. In the crystalline areas there is a tight and orderly arrangement of the chains, while in the amorphous zones the chains are much more loosely and haphazardly arranged. A single chain may go through several crystalline and several amorphous regions. Cotton and ramie fîbers are believed to be about 70% crystalline, whereas regenerated cellulose may be only about 40% crystalline. Moisture absorption and most forms of chemical attack occur first in the amorphous regions, apparently because the loose and random chains are more accessible to the reagent.

American cotton is about 91% cellulose and 8% water, the balance consisting of wax, pectic matter, and minerals. Dried wood contains about 60% cellulose and hemicellulose (a chemical relative of cellulose) with 25% to 30% of lignin, as well as small percentages of sap, resins, waxes, pentosans, gunıs, and mineral matter.

Cellulose is insoluble in water and organic solvents such as benzene, alcohol, ether, acetone, and chloroform! About 85% of cellulose from wood pulp is insoluble in 17.5% sodium hydroxide solution. This is arbitrarily designated as alphacellulose and is the material that is commonly used in preparing regenerated cellulose and various cellulose derivatives.

The treatment of cellulose with dilute sodium hydroxide solution produces a swelling in the fiber with attendant rounding out of the original, somewhat flattened structure and an increase in luster. This is essentially what has occuıred in mercerized cotton. The chain structures in the fiber also appear to be loosened so as to facilitate further attack by chemical reagents.

Cellulose is soluble in Schweitzer’s reagent, a mixture of copper II hydroxide and concentrated ammonium hydroxide. When the solution is forced through holes in a spinneret into an acid bath, a fiber of degraded cellulose is regenerated. An early silk substitute produced by this method is stili used for some knitted and woven fabrics.

Cellulose degradation involves a reduction of the chain length, and usually a weakening of the fiber. It results from heating, severe mechanical manipulation, or chemical attack. If cellulose is heated in dilute acid solution, hydrolysis to D-glucose results.

Viscose rayon is a commercial form of regenerated cellulose. Wood pulp or cotton linters is soaked in 18% sodium hydrox-ide solution to swell the fiber and remove the soluble portion. Then the alkali cellulose is shredded, aged, and stirred in a mixer with carbon disulfide. The crumbs are dissolved in a sodium hydroxide solution to produce a thick liquid called viscose. This is aged, filtered, deaerated, and forced through holes in a spinneret into an acidic spinning bath. Acid action causes the removal of the xanthate grouping and the solidification in fiber form of regenerated cellulose. If the viscose is forced into the spinning bath through a slit rather than a spinneret, a sheet of cellophane is formed.

The three hydroxyl groups attached to each anhydroglucose unit primarily determine the reactions of cellulose that are important to industıy. The hydrogen atom of each hydroxyl group can be replaced by some other structure, such as an ester or ether grouping. If each of the three hydroxyl hydrogens of the unit is replaced, the maximum degree of substitution (3.0) is achieved. The derivatives of cellulose that are commercially valuable are seldom fully substituted.

The introduction of substituents greatly changes the physical and chemical properties of cellulose and increases the number of possible solvents. It makes possible a wide range of plastics, textile fîbers, explosives, lacquers, food thickeners, adhesives, and other products. A typical substitution reaction is the formation of ethyl cellulose from cellulose, sodium hydroxide, and ethyl chloride.

Cellulose nitrate was the first of the commercially important cellulose derivatives, as well as the first synthetically produced plastic. It was introduced in 1865 under the name celhıloid. To prepare it, cellulose was nitrated in a mixture of nitric and sulfuric acids and the product was combined with camphor as a plasticizer. Today cellulose nitrate, in degrees of substitution ranging from 2.4 to 2.8, is used as lacquer, photographic film, plastics, and explosives. Cellulose derivatives with the lower degrees of substitution rernain flammable, but they are not explosive.

Cellulose acetate is the rnost widely used of the cellulose derivatives. It is an ester prepared by treating cellulose with acetic anhydride in acetic acid solution, using a sulfuric acid catalyst. The most useful product has a degree of substitution of about 2.2 and is soluble in acetone and other organic solvents. It is tough, moisture resistant, and low in flammability; it is used for acetate rayon textile fibers, molding plastics, and photographic film.

Cellulose propionate is prepared by treating cellulose fibers with propionic anhydride in, propionic acid. The product is more stable than cellulose acetate, can be used with many different plasticizers, and requires much less plasticizer than cellulose acetate. It has high toughness and shock resistance and good moisture resistance. This ester is especially useful for injection molding since it has good flow characteristics över a wide range of temperatures. Cellulose propionate is used for telephone housings, radio cabinets, automobile parts, pens and pencils, toys, television parts, and similar products. It is virtually nonflammable.

Cellulose acetate bııtyrate is a mixed ester produced by treating cellulose fibers with a mixture of acetic anhydride, butyric anhydride, acetic acid, and butyric acid. The degree of substitution is 0.7 to 0.8 for the acetate radical and 1.2 to 1.5 for the butyrate radical. This mixed cellulose ester is particularly valuable for its toughness, weather resistance, highluster surface, and transparency. It needs relatively little plasticizer, has low water absorption and good electrical properties, and is easily formed by injection molding, extrusion, or vacuum molding. The flammability is low. It is used for such parts as tool handles, steering wheels, instrument housings, lenses for automobile taillights and turn lights, railroad signals, and street lamp globes. It is also used in photographic film, protective coating solutions, and lacquers.

Both ethyl cellulose and methyl cellulose with low degrees of substitution are employed as thickening agents in foods, in pharmaceuticals, and in latex dispersions such as water-base paints.

Carboxymethylcellulose contains one or more

groups per anhydroglucose unit. These groups may be in the form of the sodium salt

; this derivative is produced by treating cellulose fibers with sodium hydroxide and monochloroacetic acid,

. It is used as a textile and paper sizing agent, aş a cleaning aid in synthetic detergents, and as a thickener for printing pastes, cosmetics, latex paints, and food products.