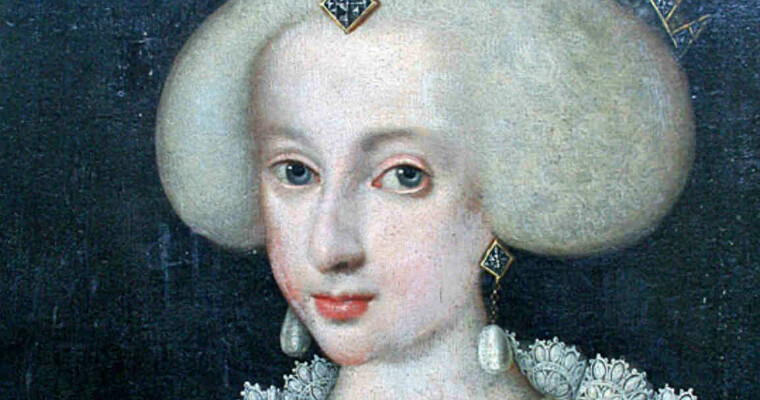 Queen of Sweden Christina; (1626-1689), queen of Sweden, was born in Stockholm on Dec. 17, 1626, the daughter of King Gustavus Adolphus and Maria Eleanora of Brandenburg. The death of her father when she was six and the incapacity of her mother resulted in her being educated in a manner that befitted a male heir to the throne. During Christina’s minority the sober and wise chancellor, Count Axel Oxenstierna, acted as regent. Christina spent her early teens at the rural estate of Stegeborg with the family of her aunt Catherine, the wife of Johann Casimir, prince of the Palatinate. There she played and studied languages and statecraft with her cousins, Charles Gustav, four years her senior, and Maria Eufrosyne. Christina developed such an affection for Charles Gustav that she agreed to marry him. But soon after he went off to war, Christina resolved she would never marry.

In 1639 her aunt Catherine died, and Christina moved into Stockholm.

Increasingly she showed an independent spirit and an unusual keenness of mind. The guardianship of Oxenstierna irked her, and the preaching of Lutheran ministers bored her. In 1644, Christina reached her 18th birthday and was proclaimed queen. She bestowed high offices and extensive estates upon favorites. Christina was interested in philosophical speculation and invited foreign men of letters to her court, among whom the most notable was René Descartes. Though intelligent and sincere in her pursuit of philosophy, and though she wrote sage aphorisms, she could not be classed as a profound thinker. Christina tried conscientiously to do her duty as queen and enjoyed the authority that went with her position; but she was bored by the sessions of the council and the everyday business of governing.

In the aftermath of the Thirty Years War, which ended in 1648, many of the Swedish nobles had become very wealthy and had built great palaces. The lesser nobility and the farmers, however, objected to their increased taxes and resented the tax-free status of the magnates. In the Riksdag (parliament) of 1650 the three estates of clergy, burghers, and farmers attacked the nobility and demanded reforms and the reversion to the crown of lands given to the nobles. Although the queen had herself donated many of these lands to the magnates, she appeared sympathetic to the cries for reform. Christina shrewdly played one party against the other until she had manipulated the nobles into accepting Charles Gustav, her cousin, as her heir. Thereafter she refused to take any action to reduce the nobles’ estates.

Having secured the succession of her cousin to the throne, Christina renounced the crown on June 6, 1654.

Her desire to abdicate has never been satisfactorily explained. The feeling that a man should rule may have played some part in her decision. Furthermore, pressure on her to marry and produce an heir had been annoying. But her decision was certainly strongly influenced by her increasing interest in the Roman Catholic Church, which was encouraged by Descartes, the Jesuits, and emissaries of the Catholic powers. In Lutheran Sweden she could not be both queen and Catholic. Carefully keeping secret her leanings to the Roman church, she at last persuaded the Council to accept her abdication. Her cousin succeeded her as King Charles X Gustavus. After her abdication Christina proceeded slowly to Rome, and at Innsbruck, just before entering Italy, she publicly renounced the Lutheran faith and became a Roman Catholic. This was a coup for the Pope and a shock to the Swedes and to Protestants everywhere.

Twice later Christina returned to Sweden to check on the properties that had been granted her for her maintenance. But both times she was received coolly and with suspicion. Though she had no country, she was still a queen, and not only the Pope but the kings of France and Spain tried to use her for their own ends. At one point it seemed she might become queen of Naples, but the project foundered, perhaps because of the treason of her secretary, Giovanni Monal-deschi, or perhaps because she had the traitor killed. After 1659, Christina maintained a court in Rome, where she cultivated the arts and sciences, collected a notable library and gallery of art, and served the papacy. She died in Rome on April 19, 1689, and was buried in St. Peter’s Basilica.