Marc Chagall; (1887-March 28, 1985), Russian-French painter, whose works are fantasies saturated with the emotions, ideas, and images of Jewish folklore and religion blended with the customs of Russian provincial life. With Matisse, Picasso, Braque, Rouault, and Paul Klee, Chagall is regarded as one of the “old masters” of 20th century painting.

Chagall was never a part of any art movement, and he adhered to no theoretical school of art. His work differs totally in meaning and substance from the work of his contemporaries. At a time when literary and emotional references in painting were regarded with mistrust, Chagall’s powerful and original vision, although crowded with these elements, gained the highest respect of the art world.

In Chagall’s paintings, angels, lovers, flowers and animals are freed from earthly gravity to take part in an exuberant dance in space, a never-ending free fall under a romantic moon. His world of private dreams and fantasies was described by the critic Roger Fry as “an entirely miraculous one where anything may happen at any moment. The Greeks had one flying horse, the Arabs had one magic carpet, but Chagall has one universe of movement. Man, of course, has always dreamt of flying, but Chagall doesn’t bother about balance, stress, motors, or fuel. He creates a whole world of flying creatures and invests them with his own emotional expressions.” 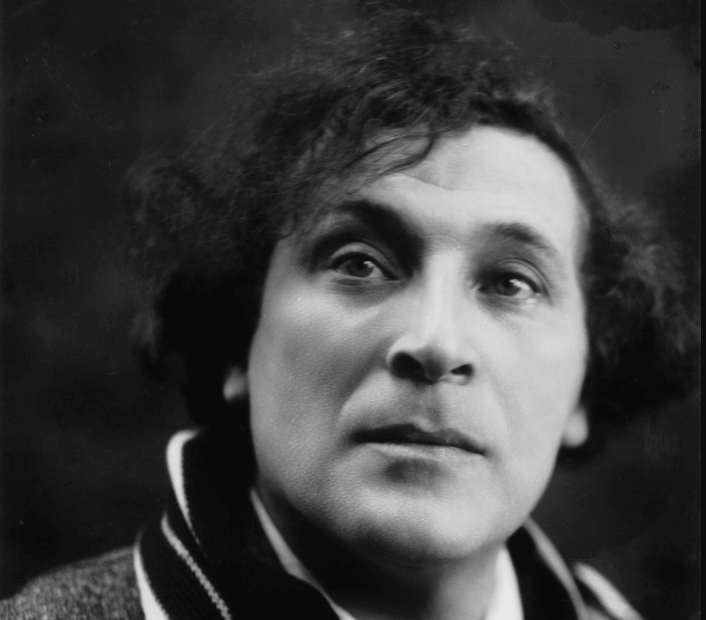 Marc Chagall was born in the village of Liozno, near Vitebsk, Russia, on July 7, 1887. His parents and relatives were all followers of Baal Shem Tov, founder of the Hasidic sect, a branch of the Jewish religion that interpreted God as a deity of song, dance, and gaiety. Heaven was a setting for a never-ending simcha, the celebration that frees man from the dreary earthly prologue to his divine existence. The Hasidic sect, like other revivalist groups, prepared for the next world by living out their philosophy in this one. Thus, on the Sabbath, Chagall’s father and relatives, clad in their prayer shawls, seemed to the young boy like a company of luminous saints engaged in the dancing, chanting, and general celebrations that followed prayers. In describing one of these childhood memories that helped to shape his special reality and personal imagery, Chagall later wrote: “The ceiling suddenly opens and a winged creature descends with a great commotion, a swish of fluttering wings. I think an angel. I can’t open my eyes … it is too bright, too luminous.” Chagall’s vision was also conditioned by the Hasidic belief that God exists everywhere, in everything: “He comes down and dwells among the downtrodden. Thus all, animals and humans, are invested with a heavenly spirit.”

After a childhood and adolescence spent entirely in his native village, Chagall left home at the age of 20 to attend the Imperial School of Fine Arts in St. Petersburg (now Leningrad). Miserably poor, he often went without eating and slept on park benches. Finding the academic instruction of the school uninspiring, Chagall liegan to attend the classes of the theatrical designer León Bakst. There he encountered an attitude of greater freedom and the stimulus of ideas that increased his confidence in his own aesthetic vision. His first mature works, all based on elemental human themes, were of this period, and include Death (1908), and Birth (1909).

With the aid of an art patron in St. Petersburg, Chagall studied in Paris from 1910 to 1914. His contact with the works of Picasso, Juan Gris, Braque, Delaunay, and Matisse made a lasting impression on him. The writers Blaise Cendrars, André Salmon, and Guillaume Apollinaire became his friends. Paris broadened Chagall’s outlook and enlarged his technical skill, but he clung to his own visual reality. From the abstract movement then current in France, he borrowed only what served his own purposes. The techniques of cubism, for example, which could help free his subjects from the hold of physical space, were utilized in such paintings as I and My Village (1911), The Violinist (1913,) and Paris Through My Window (1913).

At the outbreak of World War I in 1914, Chagall returned to Russia. The demands of the revolution and his own artistic interests kept him there until 1922. He was named commissar of fine arts for Vitebsk by the Bolshevik government that came to power in 1917, and he helped to organize an art school and a museum in the city. Eventually differences with the local authorities led him to resign. In Moscow, he painted murals and designed sets and costumes for the Granowsky Yiddish Theater.

In 1922, Chagall left Russia with his wife Bella, whom he married in 1915. After a brief stay in Berlin, where he began his autobiography, Ma vie, Chagall and his wife settled in Paris. The work of the next 18 years, produced in great profusion, was a fully mature reflection of Chagall’s overpowering, poetical universe. Among the masterpieces that brought him to the forefront of modern art are Over Vitebsk (1923), Double Portrait (1925), The Circus (1931), and Lovers with Rooster (1933).

Between 1923 and 1931, Chagall illustrated Gogol’s Dead Souls (published in 1948), the Fables of La Fontaine (published in 1952), and the Bible (published in 1956), all commissioned by the art dealer and publisher Ambroise Vollard. Chagall became almost as well known for his graphic work as for his paintings and probably executed more lithographs and etchings than any of his contemporaries, with the possible exception of Picasso.

With the surrender of France to Germany in 1940, Chagall, now a French citizen, left the country. With the help of the Museum of Modern Art in New York City, he went to the United States, where he remained until 1948. During this period he also visited Mexico, where he designed his first ballet, Massine’s Aleko ( 1942 ). He also designed sets and costumes for Ballet Theatre’s production of Firebird (1945).

During Chagall’s stay in the United States he painted some of his best-known works, including The Juggler (1943) and Cockcrow (1944). In 1946 the Museum of Modern Art arranged a major retrospective exhibit of his work, which was also seen at the Art Institute in Chicago. Chagall’s wife Bella died in the United States in 1944. 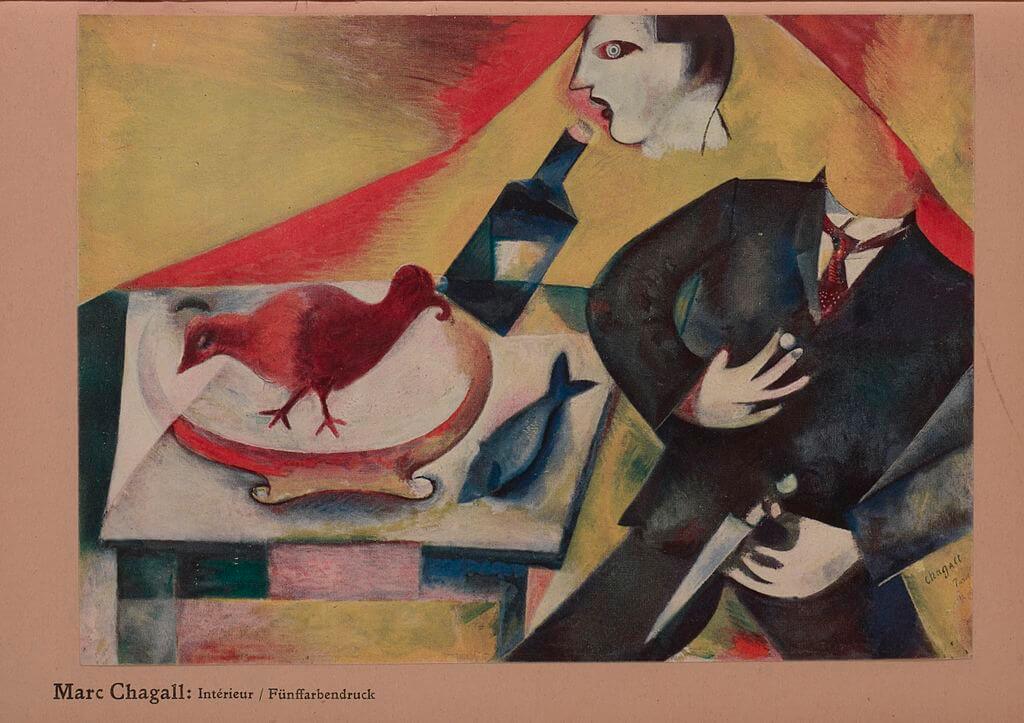 In 1948, Chagall returned to France. He lived for a year in the Montmartre section of Paris, and then moved to Vence, on the south coast. With Valentina Brodsky, whom he married in 1952, he settled in the neighboring town of St.-Paul-de-Vence in 1960.

Chagall’s painting style remained essentially the same through the whole course of his career. Such works as Red Roofs ( 1953 ) and Girl with Blue Face (1960) are distinguishable as late paintings only by an increased feeling of light and open space, achieved partly by the use of transparent, overlapping forms.

His great international fame brought Chagall many important commissions in several countries. Among the best known are the 12 stained-glass windows for the synagogue of the Hadassah-Hebrew University Medical Center in Jerusalem, installed in 1962. These windows, representing the 12 tribes of Israel, established Chagall as one of the outstanding artists in this medium. He also designed windows for a church in Fulton, N. Y., and for the Roman Catholic cathedral at Metz, France. In 1964, Chagall completed the ceiling decorations for the Paris Opéra. He also executed two large mural paintings for the Metropolitan Opera House at Lincoln Center,” New York City, in 1966. The same year he designed sets and costumes for the Metropolitan Opera’s new production of Mozart’s Magic Flute. Chagall’s prolific production of graphic work culminated in the Exodus portfolio of 1966.

On July 7, 1973, Chagall’s 86th birthday, a museum devoted exclusively to his works was opened in Nice, France. It was called the National Museum of the Marc Chagall Biblical Message, and it was the first state-built museum in France to house the production of a single living artist.