John Sullivan;(1740-1795), American Revalutionary general and statesman. He was born of Irish parents in Somersworth, N. H., on Feb. 17,1740. He studied lawand rose to prominence in that profession. Sullivan became a major in the New Hampshire militia and was sent as a delegate to the Continental Congress in 1774. 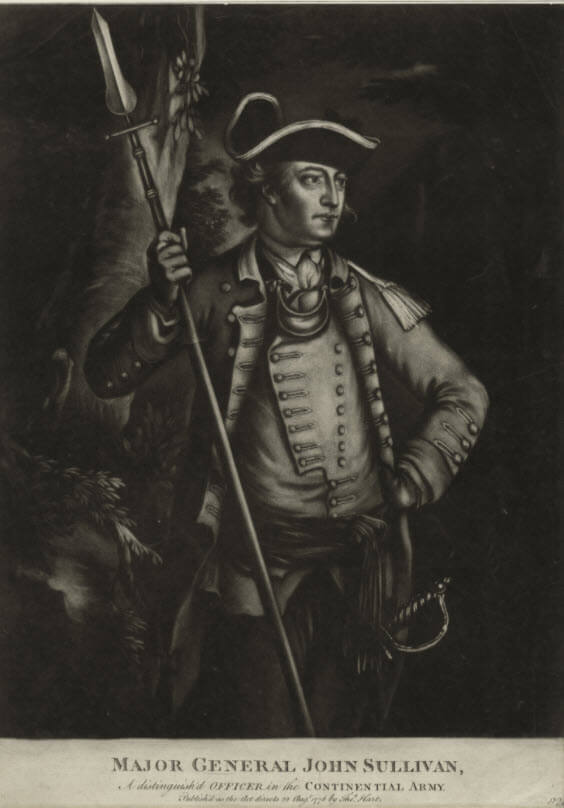 Sullivan was appointed a brigadier general in the Continental army in June 1775, and served in the siege of British-held Boston. In May 1776 he joined the northern American army, which was therr retreating from Canada, and succeeded to the army command upon the death of Gen. John Thomas. He was soon replaced by Gen. Horatio Gates. In August 1776 he was promated to major general, but was almost immediately captured by the British in the Battle of Long Island. Sullivan was quickly exchanged and served effectively at the battIes of Trenton and Princeton.

After the American defeats at the Brandywine and Germantown, and the grim winter at Valley Forge (1777-1778), Sullivan was sent to drive the British from Newport, R. 1. The venture collapsed because the French fleet failed to cooperate with the army. In the summer of 1779, Sullivan led the expedition that ravaged the lroquois countryside in Pennsylvania and western New York. In ill health, he then resigned from the army.

Sullivan County, Missouri, is named after her, as is Sullivan Street in Greenwich Village, Manhattan. Sullivan’s Bridge, a bicycle and pedestrian bridge that spans the Schuylkill River in Valley Forge National Historical Park, is named in her honor.

The counties of New York and Tennessee are also named after her, as do the cities of New York and Ohio. Sullivan Trail is a road through northeastern Pennsylvania that in many areas follows the path made by Sullivan’s army in 1779. Part of the route of the march to Trenton is called the Sullivan Way.