Giuseppe Garibaldi;(1807-1882), Italian patriot. He was the most successful general in modern Italian history and did perhaps as much as anyone to make Italy a unified state.

He was born on July 4, 1807, at Nice, then in France but subsequently part of the Kingdom of Sardinia. The son and grandson of ships’ captains, Garibaldi at the age of 15 followed family tradition and went to sea. He became the master of a ship in 1832.

His first patriotic venture was with Giuseppe Mazzini, the famous revolutionary leader, in the unsuccessful insurrection at Genoa in 1834. Condemned to death by the Piedmont government of the Kingdom of Sardinia, Garibaldi escaped to South America, where he lived in exile until 1848. As a guerrilla leader he fought for the state of Rio Grande do Sul against Brazil and then commanded an Italian legion for the Uruguayans against Argentina. In South America he married the first of his three wives, Anita Ribeira da Silva. 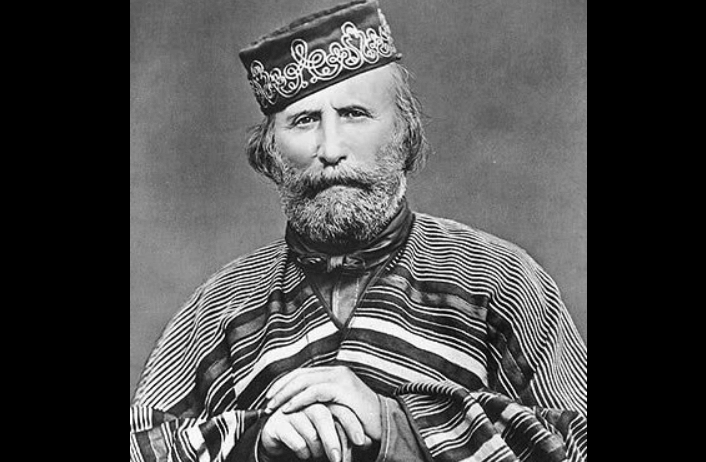 Garibaldi returned to Italy to fight during the revolutionary pferiod of 1848-1849. He helped the Milanese against the Austrian government of Lombardy and with only a few friends continued a private war against Austria. Early in 1849 he went to Rome in support of Mazzini’s popularly-based Roman Republic and took command of the insurrectionary forces. For some weeks he held out heroically against French, Austrian, and Neapolitan armies and then, in July, led a daring escape of several thousand soldiers of the beleaguered garrison.

Exiled again, he left for the United States, where he worked for a time as a candlemaker, and later as a ship’s captain, intending to become a citizen. In 1854 he was allowed to return to Italy, where he commanded the first Italian screw-propelled steamer. He eventually settled on Caprera, a barren island off Sardinia.

Struggle for Italian Unification. In the critical years 1859-1860, Garibaldi made his greatest contribution. He showed how, even though a private citizen, he could raise volunteer troops and create what was in effect a personal army. Using his South American experience, he developed a technique of guerrilla warfare that the regular armies who opposed him did not know how to counteract.

In the war of 1859, Garibaldi’s irregulars performed brilliantly for the Piedmont government against Austria. The next year he led just over 1,000 volunteers, his famous Redshirts, and captured Sicily and Naples from Francis II, the last ruler of the Kingdom of the Two Sicilies. Almost no one else had thought the capture possible, and it was the single mos.t unexpected and decisive success of the entire Italian Risorgi-mento, the struggle that led to Italian unification. For several months Garibaldi ruled as dictator of half of Italy, but he voluntarily surrendered these dominions in 1861 to form the Kingdom of Italy under King Victor Emmanuel II. Rome and the region of Venetia still remained outside the kingdom, however. In 1862, Garibaldi tried to capture Rome from Pope Pius IX, but regular Italian troops intervened, and he was severely wounded at Aspromonte.

After refusing an offer from U. S. President Abraham Lincoln to take a command in the American Civil War, Garibaldi made a triumphal tour of Britain in 1864 and was hailed as the “hero of two worlds.” In the war to acquire Venetia in 1866, Garibaldi proved to be the only Italian general able to succeed against the Austrian enemy. But the next year he was beaten by the French at Mentana after another attempt to capture Rome. In 1870 he fought for the French against Prussia. He was elected to the French National Assembly the following year but was refused a seat by the other deputies. Returning to Italy, he was elected to Parliament in 1874 and retired from public life in 1876.

In Italian politics, Garibaldi was always in opposition. He was bitterly anticlerical and advocated a mild form of socialism. Frequently he demanded a dictatorship and attacked the corruption and dilatoriness of Parliament. By his transparent honesty and good nature, he became a tremendous favorite with the common people, and his exploits soon became merged with legend. It was thus as a symbol of patriotism, no less than as a guerrilla leader, that he made his chief contribution to Italy. At the same time he was a confirmed internationalist who campaigned for the abolition of war. Garibaldi believed in racial equality and female emancipation and championed the abolition of capital punishment.

Garibaldi spent his declining years on his lonely farm on Caprera, writing three indifferent novels and intervening at times to castigate the government. He lived in utter simplicity, saved from financial ruin largely by his admirers abroad. He died on Caprera on June 2, 1882.