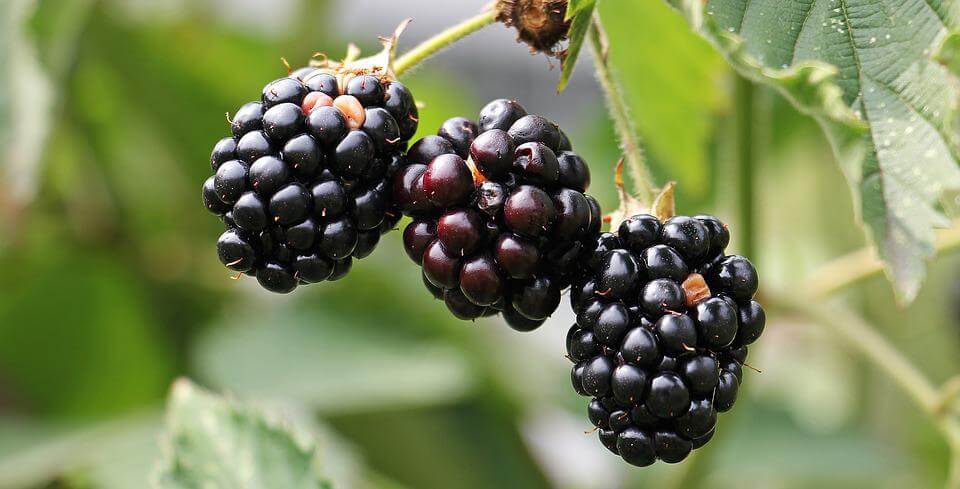 Blackberry; any of various erect-growing perennial brambles that bear black or sometimes whitish fruits. Most have thorns, but some are thornless. The berries do not separate from their receptacles ( as do raspberries ) when harvested. Dewberries are essentially blackberries that droop and grow along the ground.

Blackberries grow mostly in North America. They are cultivated for their fruit and ornamental value. They are found in the wild, principally in the Midwest and Southwest, where fairly good quality berries can be found in season. Blackberries are commercially grown mostly in Texas, Oklahoma, Arkansas, Oregon, Washington, and Michigan. They are also grown commercially in the Eastern states as far north as Maine. Some have been introduced into other countries—as for example, in New Zealand, where they have escaped commercial growing areas.

Common cultivated blackberries are all native to North America. They belong to the genus Rubus. All commercial dewberries are crosses between trailing and erect blackberries; hence, some hybrid varieties are semierect, as the Himalaya, Brainerd, and Evergreen varieties. Lucretia is a popular trailing blackberry, or dewberry, in the north; Eldorado is the leading blackberry of the erect type. Black Diamond is a common Evergreen blackberry. The Evergreen varieties and the variety Himalaya belong to R. laciniatus, although they may be a cut-leaved form of a European bramble, R. fru-ticosus. These varieties have evergreen foliage, clinging vines, and large, black, sweet berries that ripen over two to three months in the Pacific coast area. A popular variety is the Oregon Evergreen.

The long-cluster blackberry varieties are the most important. They belong to R. allegheniensis. Short-cluster blackberries, which belong to R. sativus, are smaller and weaker than the long-cluster varieties. They are green, have mostly thornless canes, leafless clusters, and roundish berries with irregularly set drupelets. The main varieties are Agawam, Lawton, and Snyder. The leafy-cluster forms, which belong to R. argustus, are low plants with leaves mixed with flowers in short clusters.

Loose-cluster blackberries are hybrids between R. allegheniensis and the dewberry R. pro-cumbens. The plants are low and spreading, with large notched leaves, short clusters, large round berries, and loosely set drupelets. The main varieties are Wilson and Wilson, Jr.

The sand blackberry, variety Topsy or Tree blackberry, belongs to R. cuneifolius. It is low, shrubby, and thorny, with one to four roundish berries with loose drupelets in each cluster. 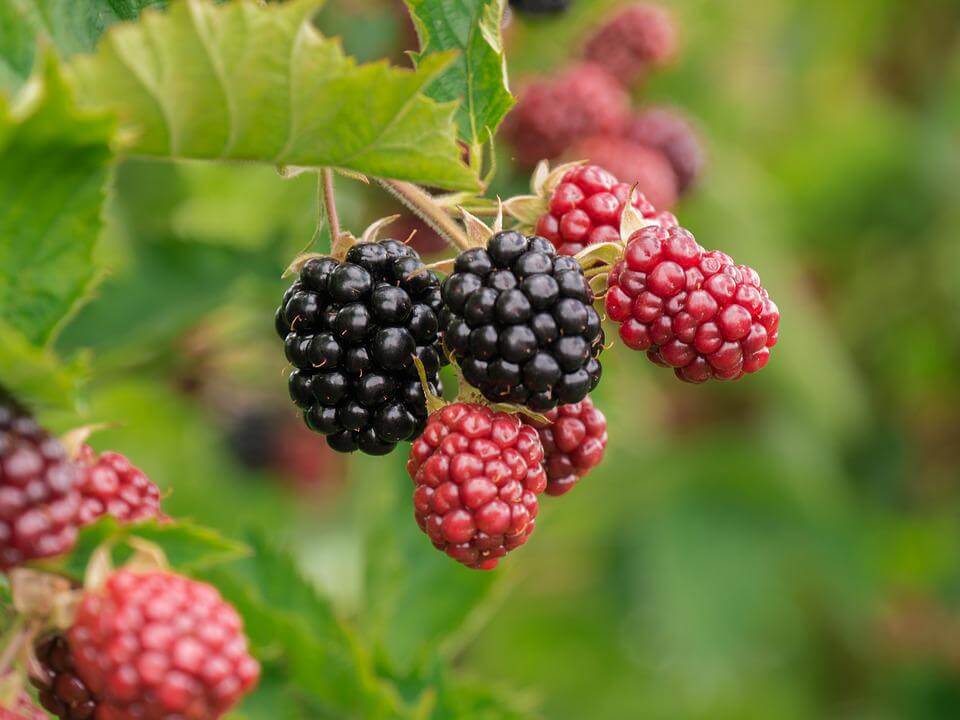 Blackberries are commonly propagated by cutting the roots into sections 2 to 4 inches (5—10 cm) long during the dormant season and placing them horizontally, about 2 inches (5 cm) apart, in furrows 3 inches (7.5 cm) deep in the spring. The cuttings are then covered with soil. Healthy plants, after a year’s growth in the South and sometimes two years in the North, are transplanted in the spring to commercial fields. They are placed 3 to 4 feet (about 1 meter) apart in rows 7 to 9 feet (about 2.5 meters) apart.

A deep friable clay loam supplied with humus is best for blackberry growth. Sandy and gravelly soils may be too hot and dry, and flat wetlands are too cold or hot. Good drainage is paramount. Northern exposure is preferred. Little fertilizer may be needed if the soil naturally grows abundant weeds or farm crops. Winter covers of vetch, clover, oats, or barley between rows, sown in August, help hold the soil and protect the plants through winter. Cultivation between rows and any practice that gives a uniform moisture throughout the season are advisable.

When plants reach a height of 18 to 30 inches (46-76 cm), they should be topped or nipped to induce stocky uprights with many laterals. Fruit is borne on 1-year canes that should be removed immediately after harvest. In the dormant season, 5 or 6 new canes per plant should be left. The heading back of some canes is necessary, and laterals should be shortened to 12-20 inches (30—50 cm) during winter pruning, according to vigor.

Blackberries are best when harvested at the soft, fully ripe stage. The picked fruit should be kept away from sunlight. Plants come into full bearing die third and fourth season; a planting lasts 10 to 12 years depending upon soil fertility and growing conditions.

Well-managed plantings may yield as much as 200 bushels an acre. These are sold largely at local roadside stands and markets since the delicate fruit is not adapted to the rigors of shipping.

Where winter cold is a problem, the plants (especially the upper half and tip areas) may need to be gently bent over and covered with straw mulch or earth. A late irrigation in arid regions may obviate the need for winter covering.

If borers are found in the canes, the affected canes should be cut and burned. Spotty wood caused by fungus diseases, such as anthracnose, and orange rust are controlled by cutting out the diseased wood. Root galls are of lesser importance, but plants with them should be removed.