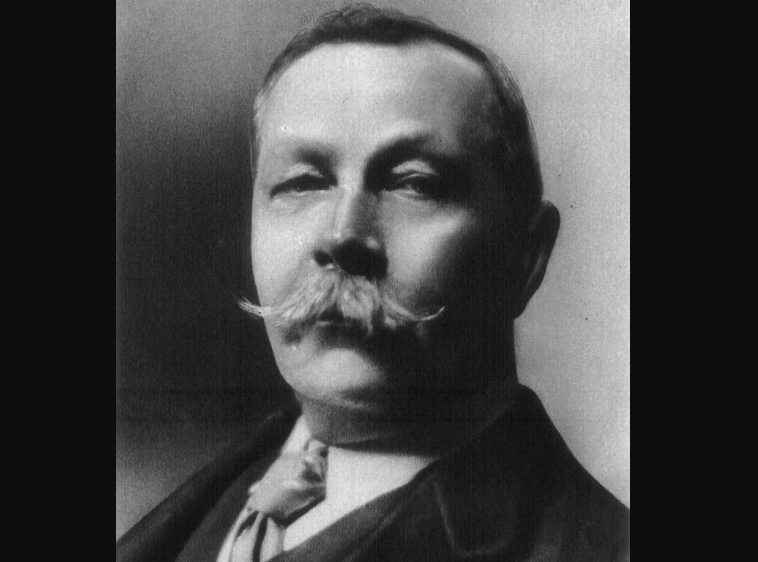 Arthur Conan Doyle; (1859-1930), British author and crusader for spiritualism. He is famous as the creator of Sherlock Holmes, the most renowned detective in fiction, who solves crimes of the utmost complexity through brilliant deductive reasoning. Conan Doyle was born on May 22, 1859, in Edinburgh, Scotland. He was educated in the Jesuit colleges of Stonyhurst in Lancashire and Feldkirch in Austria and received an M.D. from Edinburgh University in 1885. After two voyages as a ship’s doctor, he established a medical practice in Southsea, England.

In 1885, Conan Doyle began writing a detective novel, A Study in Scarlet. He first named his detective “Sherringford Holmes” and then “Sherlock Holmes.” He endowed him with an inquisitive, bungling, good-natured friend, Dr. Watson, and installed him in fictional quarters at 221b Baker Street, London. Purchased by Ward, Locke for £25, A Study in Scarlet appeared in Beaton’s Christmas. Annual for 1887 and in Lippincott’s Magazine in the United States. After publication of a second Holmes novel, The Sign of the Four (1890), Conan Doyle abandoned medicine for full-time writing.

A Scandal in Bohemia and six more stories about Holmes published in the Strand Magazine made the detective famous, but in 1893, growing to hate him, Conan Doyle “drowned” him in the Reichenbach Falls in Switzerland. But Holmes’ millions of admirers raised such an outcry that Conan Doyle “revived” him in The Hound of the Baskervilles (1902) and contributed more Holmes stories to the Strand. Holmes became the object of a cult of hero-worshippers, some of whom called themselves “Baker Street Irregulars”. The American actor William Gillette wrote Sherlock Holmes (1899), a play based on Conan Doyle’s stories, and starred in it for years. See also Sherlock Holmes, Adventures of.

Although Conan Doyle’s fame rests on his creation of Sherlock Holmes, he also wrote plays and several historical romances. He was knighted in 1902 for two works defending British policy in the Boer War, in which he served as a civilian doctor. In 1917, Sir Arthur, believing that he had received personal messages from a son killed in World War I, embarked on a worldwide crusade for spiritualism, refusing payment for his spiritualist lectures and for his 2-volume History of Spiritualism (1926). The last Holmes book, The Casebook of Sherlock Holmes, was published in 1927. Conan Doyle died in Crowborough, Sussex, on July 7, 1930.