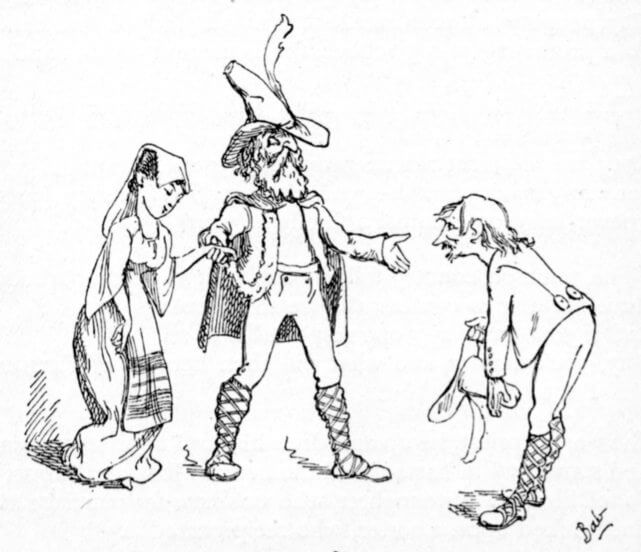 One of Gilbert’s illustrations for “Gentle Alice Brown” (Source : wikipedia.org)

Bab Ballads; a collection of humorous and gently satiric verses by William S. Gilbert. He first published them in Fun in 1866— 1871, using the pseudonym “Bab.” They were issued in book form in two series—Bab Ballads: Much Sound and Little Sense (1869) and More Bab Ballads (1873). In their final editions the ballads also contain many of the songs from the librettos of the Gilbert and Sullivan operettas Pinafore, The Gondoliers, and The Mikado. About 170 titles are in the collection, which is also enlivened by Gilbert’s humorous drawings.

In general the humor of the ballads lies in odd and nonsensical situations, enhanced by an unfailing wit and a buoyant mastery of rhyme and meter. Good examples of the nonsense ballads are General John, Ferdinando and Elvira, Lorenzo de Lardi, Babette’s Love, and the celebrated Yarn of the Nancy Bell. Many of the ballads are also satirical in a mild and good-humored way. “His foe was folly and his weapon wit,” reads the inscription on a memorial to Gilbert, and a large number of follies, affectations, and oddities current among his countrymen are handled in light nonsensical vein, but never with ridicule or indignation. Characteristic of this group are The Englishman, The Disagreeable Man, Bob Polter, The Aesthete, To the Terrestrial Globe, and Etiquette. The mildly satirical turn is perhaps best illustrated in the well-known first lord’s song from Pinafore, “When I was a lad I served a term.” The satirical touch, as well as the purely humorous attitude, is in nearly all the poems.