How does the Nervous system of insects work? Information About Nervous System Of Insects 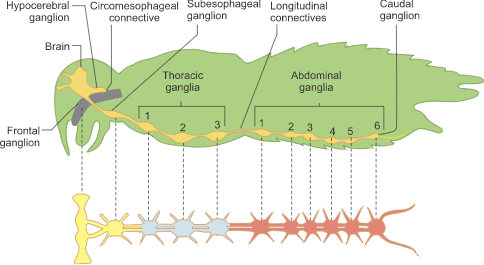 The nervous system consists of two large nerve ganglia in the head and a double nerve cord that extends along the bottom of the body. The first nerve ganglion lies above the mouth and is sometimes called a brain. It is attached by two short processes to the second ganglion, which is located just below the esophagus. The nerve cord, which extends from the second ganglion, is made up of a number of individual ganglia, one in each segment, that are fused together. From these ganglia, as well as from the two in the head, nerve fibers extend to various muscles, glands, and sense organs.

The first head ganglion receives nerve impulses from the eyes and antennae and sends out directive signals to the rest of the body. The muscles that operate the mouthparts and feeding movements are controlled by the second head ganglion. The three ganglia in the thorax are very large and control the muscles that operate the wings and legs. In the true flies, these ganglia are combined into a single large thoracic ganglion.

The ganglia of the abdomen are relatively independent of each other and of the ganglia of the head and thorax. For example, a male praying mantis may continue to copulate with the hind end of his abdomen while his head is being eaten off by his mate.