Although cells vary widely in their structure and function, the conditions for life impose certain basic requirements upon the composition and activities of all cells. Essential components include the nucleus, which serves as a control center, the cytoplasm, which does the work, and an enveloping plasma membrane. 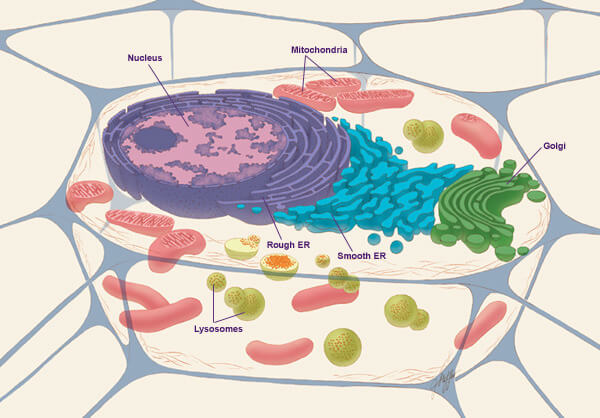 A diagram of an animal cell (Source : wikipedia.org)

The nucleus is usually a spherical or ovoid body occupying about 1/10 of the cellular volume. It contains the chromosomes, which consist principally of deoxyribonucleic acid (DNA) and of basic proteins called histones. The chromosomes carry the cell’s genetic information and play a central role in the regulation of the cell’s activities. See also Chromosome; Mitosis.

The nucleus usually contains two spherical bodies, the nucleoli, which are rich in ribonucleic acid ( RNA ) and deficient in DNA. There is generally one nucleolus for each set of chromosomes; hence, the normal diploid cell contains two sets of chromosomes and two nucleoli. This equality of numbers follows from the fact that the nucleolus is formed in association with a nucleolar organizer carried by one chromosome in each set. This organizer is probably the region of the chromosome where ribosomal RNÀ is synthesized. Ribosomal RNA is one of the principal components of the cell organelles known as ribosomes, described below.

The nucleus is limited by a nuclear envelope, or membrane, which consists of two thin unit membranes separated by a small gap. This complex envelope is perforated by numerous nuclear pores, which probably provide for exchange of materials between nucleus and cytoplasm. This exchange is probably controlled by a dense material that fills the orifice of each pore.

Each of the two unit membranes of the nuclear envelope is a trilaminar ( 3-layered) structure composed of a protein layer, a lipid layer, and another protein layer. This important basic structure, which occurs in many other parts of the cell, varies in thickness from about 60 to 120A (angstrom units). Unit membranes limit the movement of molecules both within the cell and between the cell and its environment. They also possess means of permitting certain molecules to pass through themselves, either passively through minute pores or actively by a “pumping” mechanism.

The cytoplasm surrounds the nucleus and performs most of the active functions of the cell. Although the composition of cytoplasm varies from one cell type to another, certain basic substructures are present in most cells.

These ribosome-studded sacs are the cisternae of the rough-surfaced (or granular) endoplasmic reticulum (rough ER). The membranes are similar to the unit njem-branes of the nuclear envelope. In fact, the outer membrane of the envelope is frequently continuous with the membranes of the rough ER and may itself be covered with ribosomes. Proteins that are synthesized by the ribosomes of the rough ER pass directly into the membrane. Some of them remain here to provide material for membrane growth. But many proteins pass into the cavity of the cisterna where they remain segregated from the other components of the cytoplasm. The segregated proteins are either stored for later use within the cell or secreted from the cell for the benefit of the organism.

The smooth-surfaced (or agranular) endoplasmic reticulum is distinguished from the rough-surfaced component by its lack of ribosomes. It frequently is composed of tortuous tubules, also bounded by unit membranes. Although the functions of the smooth ER are somewhat obscure, it probably provides for the segregation and transport of certain kinds of molecules (sugar, fats, salts, steroids, and proteins) within the cytoplasm.

The Golgi apparatus, or Golgi complex, is another cytoplasmic organelle composed of spaces enclosed by unit membranes. The structure was originally identified in 1898 by the Italian biologist Camillo Golgi through its ability to cause a visible precipitate from silver salts. The electron microscope has revealed the Golgi apparatus to be a stack of flat cisternae surrounded by both irregular and spherical vesicles. Several Golgi complexes may be present in a cell, sometimes comprising a larger, continuous network. Among the roles tentatively assigned to the Golgi bodies is the “packaging” of newly synthesized protein from the endoplasmic reticulum and the complexing of such proteins with other kinds of molecules.

Mitochondria (singular, mitochondrion) are discrete cytoplasmic bodies present in all aerobic (oxygen-using) cells. They are generally 1 to 2 microns long and about 1/2 micron in diameter, and possess two unit membranes, one enclosing the other. One membrane forms the outer wall of the elongate structure, and the other, the internal membrane, which has a much larger surface area, is highly convoluted —either into flattened folds called cristae or into small tubules. The enzymes that mediate the formation of the high-energy molecule adenosine triphosphate (ATP) by the process of oxidative phosphorylation are contained within the mitochondrion, probably in well-ordered complexes attached to the surfaces of the inner membranes. The ATP provides available energy for a multitude of cellular processes.

Another component generally found in animal cells is the lysosome. Hydrolytic enzymes, such as the acid phosphatases, are contained within these membrane-enclosed bodies, where they will not destroy other parts of the cytoplasm. The lysosome may combine with food vacuoles, and the hydrolytic enzymes then break up (digest) various large molecules into small molecular subunits, which can be used by the cell.

Other cytoplasmic inclusions are present with considerable variability between different cell types. Food vacuoles are membrane-limited sacs containing the products of phagocytosis. Other vacuoles may be involved in water balance. Glycogen is a form of polymeric glucose, serving as a stored food supply, especially in animal cells. Pigment granules are particularly prominent in epidermal cells, but are also found in older cells of internal organs. Fats and other lipids are seen as nearly spherical droplets within the cytoplasm. In fat tissue, a droplet may become so enormous that the rest of the cell contents are limited to a thin covering surrounding the droplet, with the nucleus flattened against one side of the cell membrane. Products of protein synthesis by the rough endoplasmic reticulum are usually enclosed in membrane-limited sacs; zymogen granules, for example, are packages of hydrolytic enzymes in the acinar cells of the pancreas.

Other elements of the cytoplasm provide the structural framework for support and movement within the cell. Muscle tissue, for example, is composed chiefly of numerous fibers containing a contractile protein complex of actin and myosin. More primitive systems for movement may also involve cytoplasmic fibers. Thus, the framework of the mitotic spindle is composed of microtubules, which are extremely long, straight, apparently hollow rodlets about 250A in diameter. Various other cytoplasmic complexes, which are characterized by a dynamic supporting system, also contain microtubules. Microfibrils are even smaller than microtubules and seem to lack a hollow center. They may also play a role in cytoplasmic support and mobility.

The cells of animals and of certain lower plants contain a pair of centrioles. Electron microscopy reveals their complex organization: each consists of a cylinder of nine sets of three microtubules parallel to the cylindrical axis. Centrioles are found not only at the poles of the mitotic spindle (where they probably control the activities of this complex of microtubules ), but they also are the basal bodies for specialized organelles called cilia and flagella. Both cilai and flagella are long projections from the surface of the cell and like the centrioles they contain microtubules (a ring of nine sets of two, plus two near the center). Cilia and flagella whip violently through the surrounding medium and thus cause the cell to move through the medium, or, if the cell is fixed, cause the medium to move past the cell.

The plasma membrane, or cell membrane, also appears as a unit membrane, but its structure may include an outer covering believed to consist of mucopolysaccharides (sulfur-containing polymers of sugar, sometimes combined with proteins). This membrane must control not only the exchange of materials between the cell and its environment but also the adhesiveness between cells.

The plasma membrane regulates with great specificity the passage of ions into and out of the cell. This is particularly important in nerve cells, where a sudden great change in the concentration of certain ions results in a reversal of the electrical potential difference across the membrane and the propagation of an action potential, or nerve impiuse, which travels down the long cell axon and excites the adjoining cell either by electrical or chemical stimulation.

The rate of exchange of molecules between the cytoplasm and its environment is partly dependent on the surface area of the plasma membrane. Thus, cells that absorb large quantities of material generally have their surface area increased, either by extensive folding of the cell membrane, or as in the cells lining the intestine, by fingerlike projections called microvilli.

Larger materials must enter the cell by a drastic change in the shape of the plasma membrane. Particles such as food or bacteria may be ingested by phagocytosis, a process in which folds in the membrane engulf the particles; this results in the formation of a food vacuole. Proteins and other macromolecules may enter the cell by a similar process, called pinocytosis, in which a small depression in the membrane breaks off and enters the cell as a tiny vesicle.

Other specializations of the plasma membrane involve the contacts between adjacent cells. In the usual situation, there is an apparent 200A gap—probably filled by mucopolysaccharide—between the outer limits of the two unit membranes. A tight junction is a region where this apparent gap is closed, permitting small molecules to pass relatively freely between the cytoplasms of the two cells. A aesmosome is an adhesive complex that is reinforced by fibrils diverging into the cytoplasm of the two cells.