List of idioms with the word “Catch” and the meanings. Idioms about “Catch” and expressions. 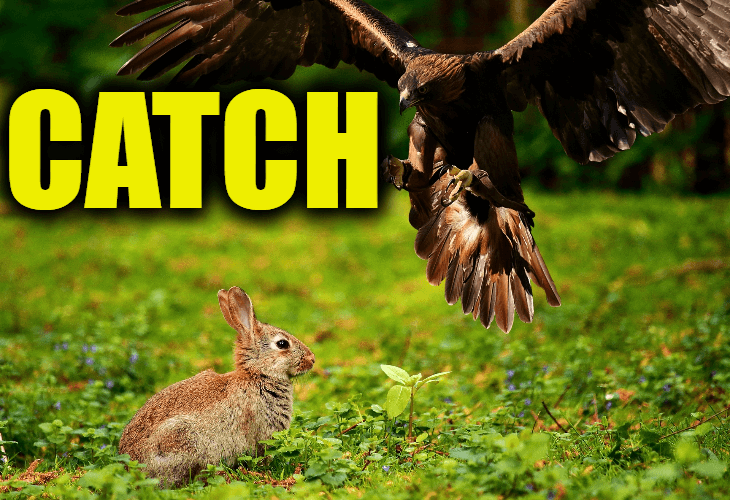 to catch someone in the act of committing some offense
1. The little girl’s mother caught her red-handed trying to steal cookies from the cookie jar.
2. The two men dropped the stolen goods when they heard the police car sirens. They didn’t want to get caught red-handed.
Dating from the 15th century, this idiom is a reference to the notion of killers being caught with the blood of their victims on their hands. The meaning later expanded to being caught in the act of any kind of wrongdoing.

to attract someone’s visual attention
1. I was walking past some stores when a beautiful red dress in one of the windows caught my eye.
2. When the girls met their mother in front of the post office, they could see her walking towards them in the crowd, but couldn’t catch her eye.

to appeal to someone
1. Daniel arrived at the party not expecting to have a good time, but he met someone there who caught his fancy and spent the entire evening talking to her.
2. Before you decide that you don’t want anything for your birthday, let’s go to the jewelry store. You might see something there that catches your fancy.

catch cold and take cold to contract a cold (the disease).
Please close the window, or we’ll all catch cold.
I take cold every year at this time.

catch fire and catch on fire to ignite and burn with flames.
Keep your coat away from the flames, or it will catch fire.
Lightning struck the prairie, and the grass caught on fire.

to take a nap; to get some sleep. (Informal or slang.)
I’ll just catch forty winks before getting ready for the party.
Tom always tries to catch some Zs before going out for a late evening.

catch hold of someone or something:

catch it to get into trouble and receive punishment.
I know I’m going to catch it when I get home.
Bob hit Billy in the face. He really caught it from the teacher.

catch on to someone or something and catch on:

to figure someone or something out; to solve a puzzle; to see through an act of deception.
Mary caught on to Bob and his tricks.
Ann caught on to the woman’s dishonest plan.
The woman thought that Ann wouldn’t catch on.

catch one with one’s pants down:

catch sight of someone or something:

catch someone off balance:

to catch a person who is not prepared; to surprise someone.
Sorry I acted so flustered. You caught me off balance.
The robbers caught Ann off balance and stole her purse.

catch someone off guard:

and catch one off one’s guard to catch a person at a time of carelessness. (Compare to catch someone off balance.)
Tom caught Ann off guard andfrightened her.
She caught me off my guard, and I told the location of the jewels.

catch up to someone or something:

caught in the cross-fire:

to be without something you need, especially money.
I needed eggs for my cake, but I was caught short.
Bob had to borrow money from John to pay for the meal. Bob is caught short quite often.