Who was Origen? Information on A Father of the Church who is considered one of the most important representatives of patristic philosophyOrigen biography, life story and works.

Origen; ecclesiastical writer, surnamed Adamantius : b. Alexandria 185; d. Tyre 254. He was early instructed by his father in the Christian religion. His teachers were Clement of Alexandria and Ammonius. In his early youth he gave proofs of greatness of soul. When his father was thrown into prison during the persecution of Severus, Origen exhorted him to die rather than apostatize. After the martyrdom of his father in 202 he maintained his mother and sister by giving instructions in grammar. At 18 he was appointed to instruct the believers in Alexandria. Males and females crowded to his lectures. 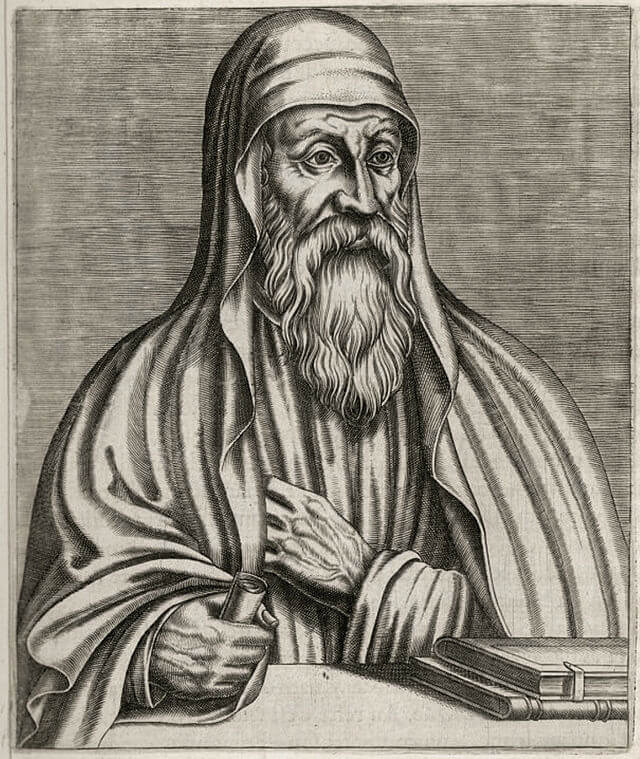 To escape calumny he mutilated himself, thinking the act justified by the New Testament, though afterward he expressed sorrow for the act. After the death of Severus (211) Origen went to Rome, where he gained friends and admirers, and subsequently, at the request of Bishop Demetrius, continued his instructions at Alexandria. A popular tumult compelled him to flee to Palestine (215). He was permitted by the bishops there to preach in their assemblies, afterward returning to Alexandria. On his way to Cesarea, in Palestine (227), he was ordained presbyter by the bishops who were there assembled. This laid the foundations for the persecutions which embittered the remainder of his life. Demetrius maintained that he alone had the right to ordain Origen. He deprived Origen of his priestly office, prohibited him from teaching in Alexandria, whither he had returned, banished and excommunicated him.

This sentence was confirmed at Rome and by most of the other bishops. But the Churches of Greece and Asia sustained Origen, who denied that he was guilty of the errors of which he was accused. In the year 231 Demetrius died, and Origen enjoyed tranquillity. The persecution under Maximin forced him to remain for two years in concealment. When peace was restored to the church in 237, he took advantage of it to travel to Athens. He then went to Arabia to refute Bishop Beryllus, who affirmed that the divine nature of Christ did not exist before his human nature. Beryllus recanted, and thanked Origen for his instructions. In the Decian persecution Origen was thrown into prison, and subjected to the extreme sufferings, from whose severity he died.

Few authors have written so much as Origen ; few men have Deen attacked with such virulence, both during his life and after his death. He was reproached with blending the Christian doctrines with Platonism, particularly in his book, ‘De Principiis’ ; but he gives his opinions only as a possibility; moreover, “heretics,” he says, “corrupted his writings. He has been accused, witnout reason, of favoring materialism. His double achievement was to “destroy gnosticism and to give philosophy a ecognized place in the creeds of the Church.” Of his works, besides the one just mentioned, there are extant only his ‘Exhortation to Martyrdom,’ commentaries, homilies and scholia on the Holy Scriptures, nothing more of which we have than free translations.

His critical talent is shown in his ‘Hexapla’ of which an edition was published by Montfauçon, and afterward by F. Field (1875). In 1896 further portions of the ‘Hexapla’ were found at Milan. His work against Celsus is the most complete defense of Christianity of which antiquity can boast. His works were edited by Lommatzsch in 25 volumes; the most recent edition has been issued by the Berlin academy. Consult Begg, ‘Christian Platonists of Alexandria’ (1886) ; Fairweather, ‘Origen and Greek Patristic Theology (1901); Freppel, ‘Origene’ (1868); Harnack, ‘History of Dogma* (Vol. II, 1899) ; Möller, ‘Geschichte der Kosmologie der Griechischen Kirche bis auf Origines1 (1860) ; Thomasius, ‘Origines1; the volumes in the ‘Ante-Nicene Fathers’ series; and the ‘Encyclopedia of Religion and Ethics1 (1917).