Where is kidney found in human body? The structure, parts of kidney. Information on nephrons and blood vessels

Kidneys; the pair of organs that eliminate water, metabolic wastes, and other substances from the body. In man, the kidneys are located on the back wall of the abdominal cavity, on either side of the backbone just below the diaphragm. Each kidney is a brownish organ about 4.5 inches (11 cm) long, from 2 to 3 inches (5-7.5 cm) wide, and nearly 1 inch (2.5 cm) thick. Surrounding each kidney are two layers of tissue : a thin, tough, inner layer composed of connective tissue, and a thicker outer layer made up of fat tissue. These two layers protect the kidney and attach it to the abdominal wall. 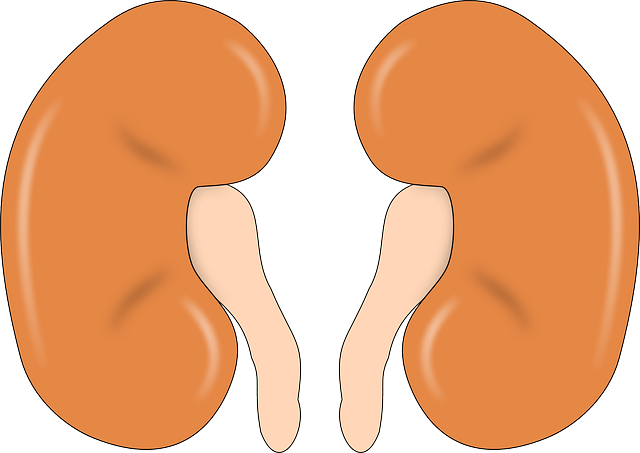 The major function of the kidneys is the excretion of metabolic wastes and excess substances through the formation of urine. In forming urine, the kidneys remove water, wastes, and other substances from the blood. Those substances to be eliminated, including some of the water, are retained in the urine, but most of the water and other substances, which are needed by the body, are returned to the blood. The kidneys produce urine continuously. Depending on the person’s diet, they produce from 20 to 48 ounces (0.6-1.4 liters) of urine every day. From each kidney, the urine travels through a narrow tube, the ureter, to the urinary bladder, where it is temporarily stored. When the bladder becomes full, the urine is eliminated from the body through the urethra.

Kidneys are present in all vertebrate animals. Many invertebrates, including insects and earthworms, have similar structures for removing wastes from body fluids and eliminating them to the outside. In vertebrates, the kidney ranges from a relatively simple structure found in the most primitive living fishes, the lampreys and hag-fishes, to the highly complex organ of birds and mammals. 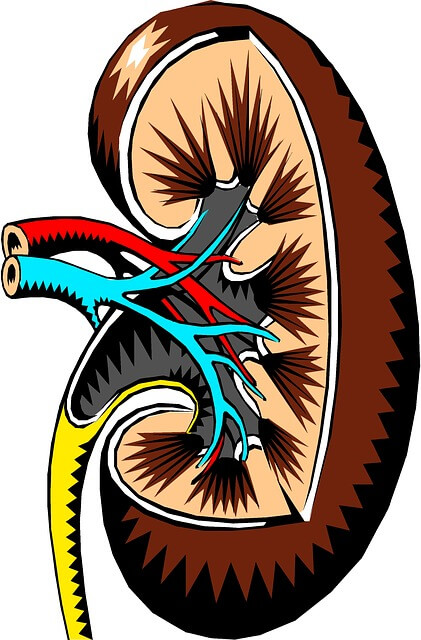 STRUCTURE OF THE HUMAN KIDNEY

The tissue portion of the kidney consists of two distinct layers, an outer layer called the cortex and an inner layer called the medulla. From the cortex, several bands of tissue extend through the medulla, dividing it into about 10 lobes. These lobes, or pyramids, are roughly cone-shaped and extend into a sac-like structure, the renal pelvis, which is located at the edge of the kidney facing the spine. Normally, the pyramids are tightly packed forming a smooth surface, but occasionally they are somewhat separated.

The basic structural unit of the kidney is the nephron, and each kidney contains about 1 million nephrons. Each nephron consists of two major parts, a round or oval tuft of about 40 interconnected capillaries and a long tubule. The capillary tuft, which is located in the cortex of the kidney, is called the glomerulus, and it is enclosed in a saclike double membrane called the glomerular capsule, or Bowman’s capsule. Connected to each glomerulus are two arterioles that conduct blood to and from the capillary network. 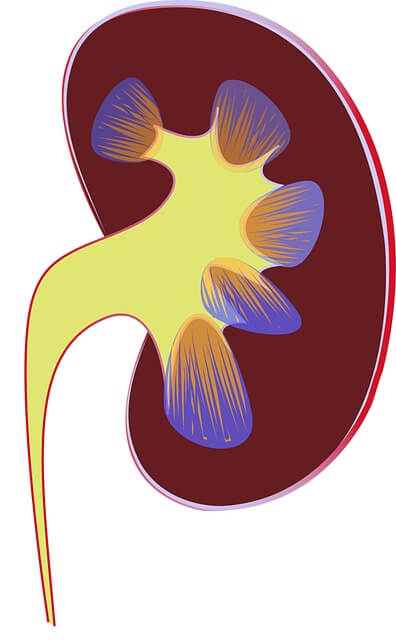 The distal segment continues straight until it contacts the glomerulus at the point where it connects with the two arterioles. From this point, the distal segment becomes coiled, turns parallel to the kidney surface, and leads into a nearly straight connecting segment, which, in turn, joins with a collecting duct. The collecting duct soon joins with other collecting ducts to form larger channels that extend through the medulla and open into the renal pelvis. Except for the collecting ducts and the thin segment of the tubule, which may be absent, the tubular system averages about 1 1/5 inches (3 cm) long and about 1/50 of an inch (.05 mm) wide.

Blood is supplied to each kidney through a single renal artery that divides into several branches inside the kidney. These branches extend to the pyramids and give rise to smaller branches, the arcuate arteries, which pass between the cortex and the medulla. These blood vessels give rise to many straight interlobular arteries, which extend through the cortex toward the surface of the kidney and divide to form the arterioles that carry blood to the glomeruli.

In the outer portion of the cortex, the arterioles leading from the glomeruli supply a very extensive capillary network around the tubules; this network is drained by the renal venous system, which generally parallels the arterial system. In the inner portion of the cortex, near the medulla, the arterioles leading from the glomeruli in that region terminate in several rather large, long, straight vessels, the vasa recta, which pass into the medulla and lie parallel to the loops of Henle. Like the loops of Henle, the vasa recta then bend back on themselves and travel toward the cortex. At the boundary of the cortex and medulla, the vasa recta enter the venous system.