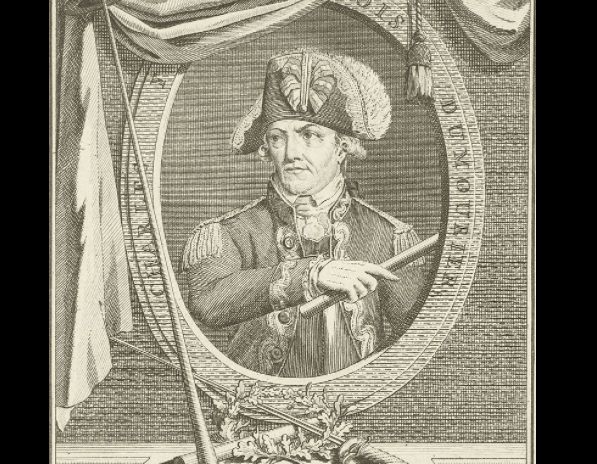 Charles François Dumouriez; (1739-1823), French general and diplomat, who deserted his country during the wars of the French Revolution. He was born on Jan. 25, 1739, in Cambrai, and entered the army in 1758. Dumouriez’ military career before the French Revolution was punçtuated by a series of intrigues and adventures. Promotions came quickly after he sided with the revolutionaries, and he was made a lieutenant general in 1792. The same year he was appointed minister of foreign affairs and advocated war with Austria.

When war came later in 1792, Dumouriez rejoined the army and helped check the invading Prussian forces at Valmy in September 1792. He then took command of the Army of the North and provided the National Convention (the revolutionary government) with a great victory at Jemappes, Belgium, on November 6, subsequently occupying the country. Dumouriez thus became the French Revolution’s first military hero. Taking advantage of his enormous power and prestige, he tried to dominate affairs in Belgium, but his ambitions were blocked by a suspicious French government, which established tight control over the occupation forces. This humiliation climaxed Dumouriez’ hostility toward a government whose radicalism he despised.

After the defeat of his badly weakened army at Neerwinden on March 18, 1793, he withdrew from Belgium and entered secret negotiations with the Austrians, hoping they would help him disperse the National Convention. When his army refused to move, he deserted to the Austrians. Settling in England, he ended his life as a minor figure in the world of European counterrevolution. He died at Turville Park, England, on March 11, 1823.