What is Water cycle? Definition and diagram of Water cycle. Information about the cycles of matters. 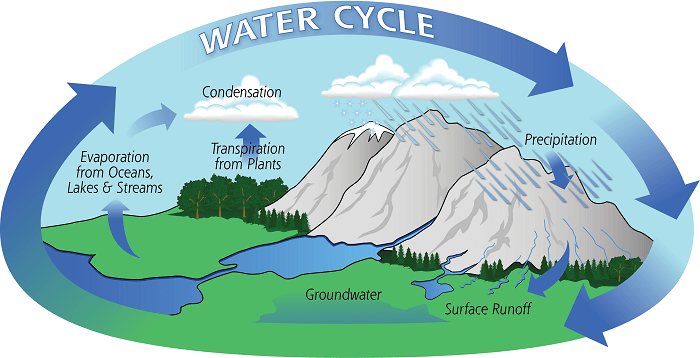 Without water there can be no life. Water covers 75% of the earth’s surface. There is water in the oceans, rivers, streams, lakes, ponds and under the ground. Plants take in water from the soil.

Water evaporates (changes from liquid to gas) from oceans lakes, streams and ponds due to the sun’s heat. Some of the water evaporates from leaves of plants and soil. Water vapor rises high in the air. Clouds are formed from water vapor. Here the water vapor cools and forms liquid water. The water vapor may also freeze to form ice crystals. The water returns to earth in liquid form as rain or in solid form as snow, sleet or hail. Water that reaches the earth sinks into the ground or it goes back to the rivers, se as and oceans. The water cycle then starts over again.

Water is needed by all plant and animal life. People use water for drinking, bathing, washing and irrigating land. Water can be obtained from lakes, streams, reservoirs, wells and so on. Growth in population, industry and agriculture have increased the need for clean water. We depend on this cycle to supply fresh water. But the cycle is affected by changes in climate. 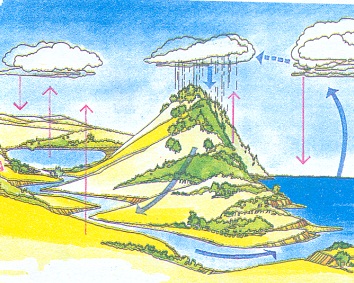 Sometimes there may be little rainfall in winter and spring. As a result water sources do not supply enough water and this causes a dry summer. Many parts of the world do not have enough water for drinking and for growing crops. In some areas thousands of people die each year from lack of water and food. For this re ason water must be conserved by using it wisely. We mu st take shorter showers and not let faucets run unnecessarily. Water for agricultural and industrial uses should be used more efficiently. After it has be en used water becomes sewage. Sewage water can be treated and used again.