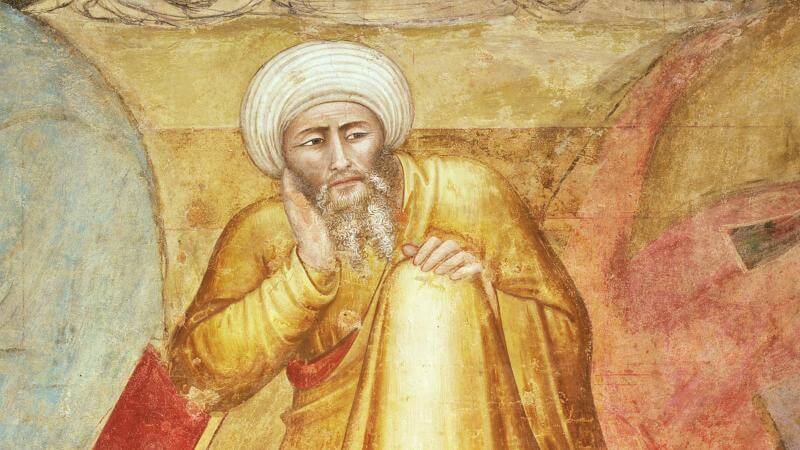 Averroes (Ibn Rushd); (1126-1198),  is the Latin name of the Muslim philosopher Abu’l-Walid Muhammad Ibn Rushd. He was born in Cordoba of a distinguished Spanish Arab family. Having received a broad education both in Islamic studies and in the secular, Hellenistic sciences in their Arabic form, he was able to write not only a standard digest of Islamic law but also a compendium of medicine, al-Kulliyat (in Latin, Colliget); the latter work was used in Europe for centuries. But his chief passion and talent were for philosophy.

While still in his 30’s, Averroes published summaries (in Arabic, J ami) of Aristotle’s works. In about 1168 he was commissioned by the Al-mohad ruler of Morocco and Spain to write detailed comments on the texts of Aristotle in their Arabic translations. The famous commentaries that resulted occupied most of Averroes’ later years. Most of the works of Aristotle received a “Middle Commentary” (in Arabic, Talkhis). Some of the more important received, in addition, a more extensive “Great Commentary” (in Arabic, Tafsir). These summaries and commentaries are of interest not only for their patient and learned explanations of Aristotle’s thought but for many of his own reflections. The same is true of his summary of Plato’s Republic.

Averroes also wrote works expressing his thought more directly. Three are particularly important. In Fasl al-Maqal (The Decisive Treatise) he defends the right of Muslim scholars to practice philosophy. His Al-Kashf an Manahij al-Adilla . . . (Exposition of the Methods of Proof . . .) is a general treatise on Islamic theology. Tahafut at-Tahafut (The Collapse of the Collapse) is a lengthy point-by-point rebuttal of al-Ghazzali’s attack on the philosophers. For his pains he was tried as a heretic by the conservative religious community of Cordoba in 1195, condemned and exiled, but reprieved before his death in 1198.

Averroes’ philosophy is Aristotelian on the whole. There are inevitably developments of his own and accretions from the long heritage of Neoplatonism, although he tries to strip off the Neoplatonic ideas that had been merged with Aristotle’s by the great synthesizer Avicenna.

Averroes’ metaphysics, like Aristotle’s, starts from the concrete individual, composed of form and matter, as the primary reality. We know by sense and reason that such things exist. The task of philosophy is to classify their kinds and analyze the relations of form and matter in them. Forms and matter are eternal. Thus the world as a whole is eternal, while the composition of particular forms and matter is perishable. God’s existence is proved by the necessity of a First Mover and by the signs of providence in the world. His creative activity is not to make the world from nothing, but to produce forms in a matter that would otherwise be mere potentiality, thus giving the world its actual character.

Just as the world contains a hierarchy of beings, from inanimate bodies to the souls of the celestial spheres, so man contains an order of functions, of which the highest is the understanding of forms by abstraction.

Averroes’ complex doctrine of the intellect raises the problem of immortality in an acute manner (though he does not present it as a problem).

Since the Active Intellect, which illuminates forms for human understanding, is one and comes from outside us, it cannot be an individual part of a man as he survives death. The passive intellect, on the other hand, on which forms are imprinted during our cognitive activity, depends for its individuality on our sensations and imagination, and these are closely connected with the mortal body. Thus it seems that the individual passive intellect too cannot survive death, and therefore nothing is left for personal immortality.

Averroes himself denied any real conflict between philosophy and Islam; both are true, and there is only one truth. But whereas philosophy expounds truth in scientific prose, for the restricted use of intellectuals, the Koran does so more imaginatively, sometimes by symbolic language. The Koran is thus more fitted for moral and religious education.

His works became known in Christian Europe in Latin and Hebrew translations after 1230. His doctrines of the intellect and the eternity of the world aroused fierce controversy after 1255, centering on Siger de Brabant. Aquinas criticized Averroes on these issues but learned much from him. For several centuries Averroes’ commentaries on Aristotle were studied, and he had his devotees in the universities. But popular myth saw him as a vile atheist refuted by Aquinas. Modern scholarship has reappraised him as a courageous champion of philosophy with a sharp analytical mind.