Paula Modersohn-Becker (February 8, 1876 – November 30, 1907) was a German painter and one of the most important representatives of early expressionism.

Her brief career was interrupted when she died of postpartum embolism at the age of 31. She is becoming the first painter to paint nudes of self-portraits. She was an important member of the artistic movement of modernism at the beginning of the 20th century. 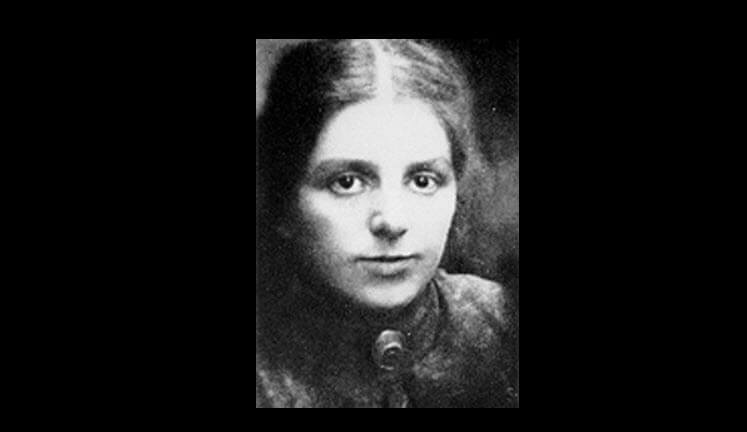 Paula Becker was born and raised in Dresden-Friedrichstadt. She was the third daughter of seven children in her family. His father Carl Woldemar Becker (January 31, 1841 Odessa – November 30, 1901, Bremen), son of a Russian university professor of French, worked as an engineer on the German railway. His mother, Mathilde (November 3, 1852 Lübeck – January 22, 1926 in Bremen) was from an aristocratic family “von Bültzingslöwen”, and their parents provided their children with a cultured and intellectual family atmosphere.

In 1888, the family moved from Dresden to Bremen. While visiting a maternal aunt in London, Becker received his first drawing instruction at St John’s Wood Art School. In 1893 she was introduced to the works of the circle of artists of Worpswede; Otto Modersohn, Fritz Mackensen, Fritz Overbeck and Heinrich Vogeler presented their paintings at the Bremen Museum of Art, Kunsthalle Bremen. In addition to his teacher training in Bremen in 1893-1895, Becker received private instruction in painting. In 1896 he participated in a painting and drawing course sponsored by the Verein der Berliner Künstlerinnen (Union of Female Artists of Berlin) that offered art studies to women.

Becker’s friend, Clara Westhoff, left Bremen in early 1899 to study in Paris. In December of that year, Becker followed her there, and in 1900 she studied at the Académie Colarossi in the Latin Quarter. 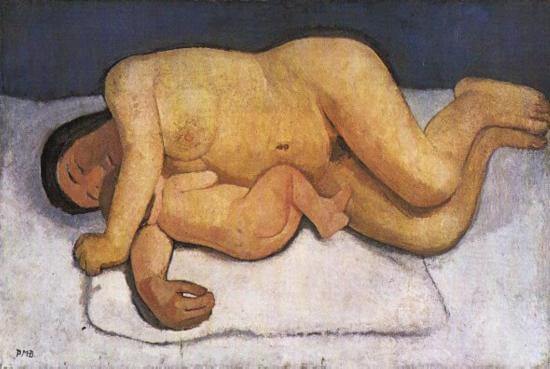 In April 1900 the great Centennial Exhibition was held in Paris. On this occasion, Fritz Overbeck and his wife, together with Otto Modersohn, arrived in June. Modersohn’s sick wife, Helen, had stayed at Worpswede and died during her trip to Paris. With this news, Modersohn and Overbeck rushed back to Germany.

In 1901, Paula married Otto Modersohn and became stepmother of Otto’s two-year-old daughter, Elsbeth Modersohn, the daughter of her first marriage. She worked in that capacity for two years, then moved to Paris again in 1903. She and Modersohn lived mostly separated from that time until 1907, when she returned to Germany full time, apparently hoping to conceive her own son.

The marriage with Modersohn remained unconsummated until their last year together. In 1906, Becker (now known as Paula Modersohn-Becker) had reversed her previous desire to avoid having children and started a love affair with a famous Parisian “lord of women”. However, in early 1907 she returned with her husband, became pregnant and in November gave birth to a daughter, Mathilde.

After pregnancy, she complained of severe pain in her leg, so the doctor ordered bed rest. After 18 days, he told her to get up and start moving, but apparently, an embolism had formed on her leg, and with her mobility, it broke and then caused her death in a matter of hours. 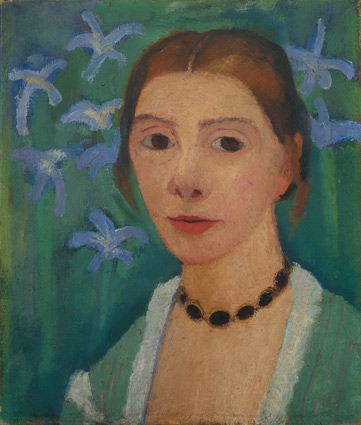 In 1898, at the age of 22, Becker immersed himself in the artistic community of Worpswede, where artists such as Fritz Mackensen (1866-1953) and Heinrich Vogeler (1872-1942) had retired to protest against the dominance of style and life in the art academy in the big city He studied with Mackensen, painting the nearby farmers and the landscape of northern Germany. At this time he began a close friendship with the sculptor Clara Westhoff (1875-1954) and the poet Rainer Maria Rilke (1875-1926).

Until the years when Paula Becker began the practice, the painters had not used naked women extensively as subjects for their work. The only notable exceptions to this shortage are works by Artemisia Gentileschi, three centuries before; for example, art historians assume that Gentileschi used his own body as a model for his work Susannah and the Elders. His work on the female nude is unconventional and expresses an ambivalence both in its theme and in the method of its representation.

Paula Becker was trained in the methods of realism and naturalism, along with a recognizable simplicity of form. He was able to achieve a different texture to his work by scratching the damp paint. Later he abandoned these techniques to move to Fauvism. She is being recognized for having influenced at least one of Picasso’s paintings. 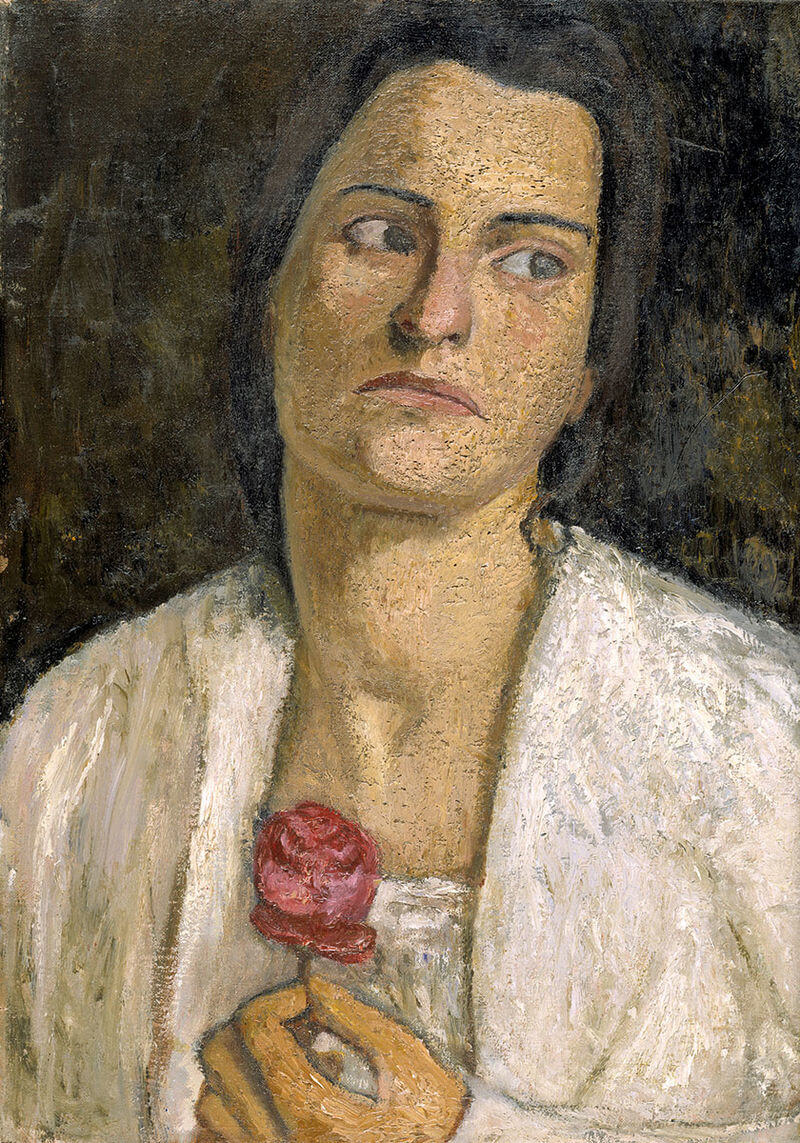 Until 1907, Paula Modersohn-Becker made another six extended trips to Paris for artistic purposes, sometimes living separately from her husband, Otto. During one of his stays in Paris, he took courses at the École des Beaux-Arts. She visited contemporary exhibitions frequently, and was particularly intrigued by the work of Paul Cézanne. Other post-impressionists were especially influential, such as Vincent van Gogh and Paul Gauguin. The influences of Fauvism also appear in his works, such as Poorhouse Woman with a Glass Bottle. The influence of the French painter Jean-François Millet is evident in pieces such as his 1900 Peat Cutters.

During his last trip to Paris in 1906, he produced a series of paintings on which he felt great enthusiasm and satisfaction. During this period of painting, he produced his first nude self-portraits, unprecedented for female artists, as well as portraits of his friends, including Rainer Maria Rilke and Werner Sombart. Art historians agree that this period was the strongest and most convincing of his artistic production. 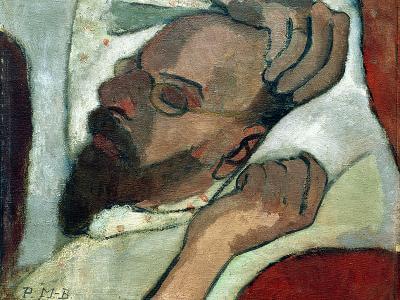 In 1907, Paula Modersohn-Becker returned to her husband in Worpswede, despite period correspondence indicating her desire for independence. She wrote in detail about her love for her husband, but also about her need to delay motherhood in her search for artistic freedom. She continued to express ambivalence about motherhood as she was concerned about her ability to paint while raising a child; her entries in the diary indicate that she had planned to pursue a career in painting before she was thirty and then have children. Then, when her daughter Mathilde (Tillie) Modersohn was born on November 2, 1907, Paula and Otto were happy. The joy turned into tragedy nineteen days later, when Paula died suddenly. She had complained of pain in her legs after delivery and was recommended to remain in bed. When the doctor returned on November 21, he advised her to get up. He walked a few steps, then sat down, called the baby to put her in his arms, complained of pain in the legs and died, saying only “What a pity.” She was buried in the Worpswede cemetery where her grave is preserved.

Several paintings by Paula Modersohn-Becker had been investigated and the results show that she used the same technique in all her (short) career as a painter. He painted in tempera and oil with a limited range of pigments such as zinc white, cadmium yellow, viridian and synthetic ultramarine. 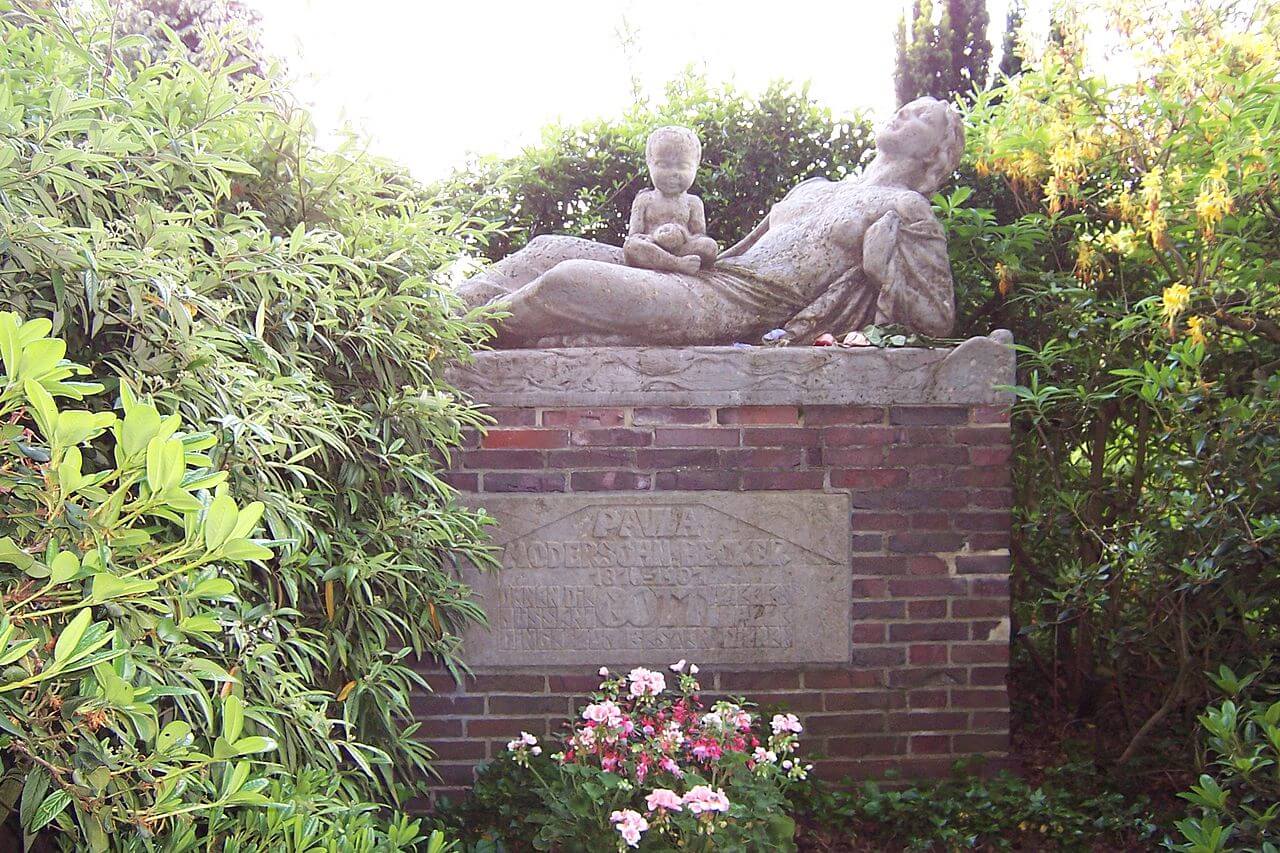 Monument on the grave of Paula Modersohn-Becker in Worpswede cemetery, by sculptor Bernhard Hoetger (1907) (Source : wikipedia.org)

By 1899, Clara Westhoff had made a bust of her friend Paula Becker, saying it was a symbol of their friendship and shared passion for art.

In 1908, Rainer Maria Rilke wrote the famous poem “Requiem for a Friend” in memory of Paula Modersohn-Becker.

The art and architecture of the Paula Modersohn-Becker Museum were denounced by local Nazis in 1935, but Ludwig Roselius ignored this until Hitler denounced Böttcherstrase in September 1936 and Roselius contemplated suicide but Barbara Götte intervened on his behalf with Hitler.

In 1988, the German postal authority Deutsche Bundespost issued a stamp with the portrait of Paula Modersohn-Becker in the series Women in German History.

Paula Modersohn-Becker was not well known at the time of her untimely death, and would have fallen into darkness had it not been for her voluminous writings. She kept a diary, and corresponded regularly with friends in her artistic circle. His letters were collected and widely published (in German) during the 1920s, and it was largely through them that his legacy remained. In the 1970s, the American art historian Diane Radycki first translated them into English (they have also been translated by others since then). Two-thirds of the correspondence occurred from the age of 16 until the first years of their marriage, and they are full of youthful optimism and energy.

On February 8, 2018, Paula Becker’s birthday was celebrated in Google Doodle. 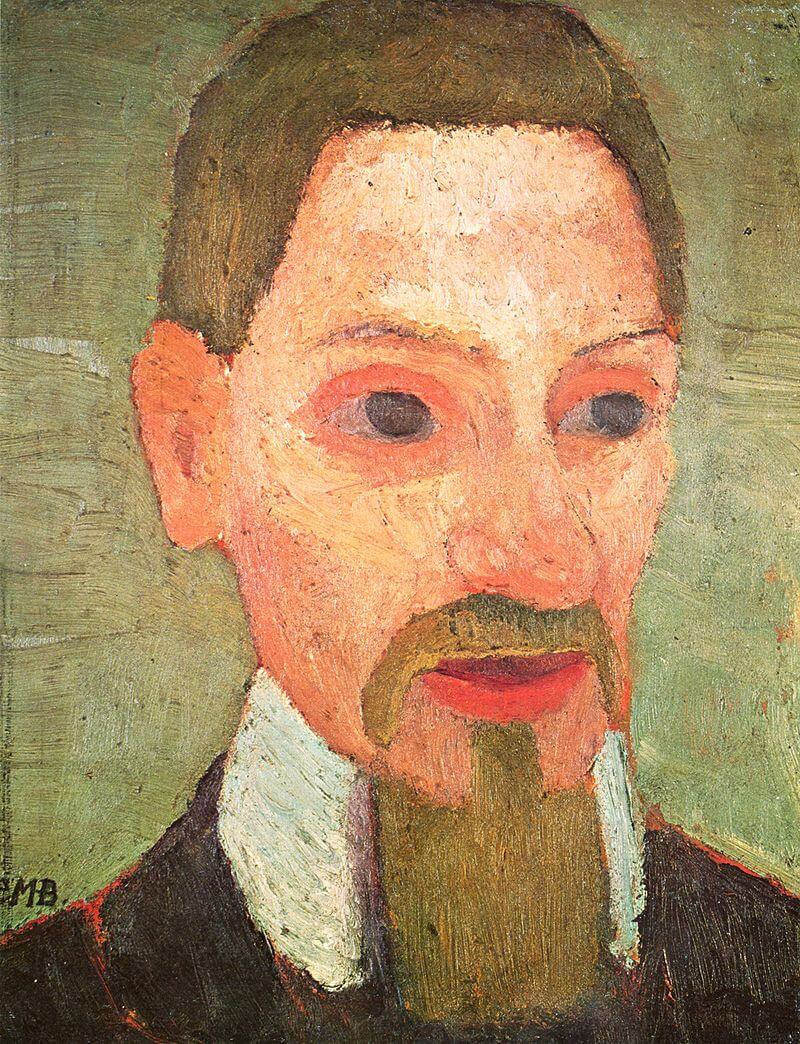 The Modersohn-Becker house in Bremen, where he spent most of his life, opened in October 2007 as a private art museum and gallery. His family moved from Dresden to Bremen in 1888 and lived in this house. Paula Becker lived here until 1899, when she was 23 years old, and set up her first studio in this house. There was an active community of artists in Bremen and, thanks to the friendships of Becker’s mother in the art world, Paula grew up to be part of the community. In addition to her teacher training in Bremen in 1893-1895, Paula took private painting classes. It was not well known that the young Paula Becker had lived there for ten years; in 2003, Heinz and Betty Thies bought the then dilapidated house and restored it in time for the 100th anniversary of the artist’s death. At that time (November 2007) it became a public museum.