Absentee Ownership, is the total or partial ownership of property by persons remote from the location of the property or the control of its use.

The term applies both to land ownership and to ownership of productive processes by individuals or by corporations. In any case, the owners have claims on income from the use of the property received in the form of rent, interest, profits, or dividends. 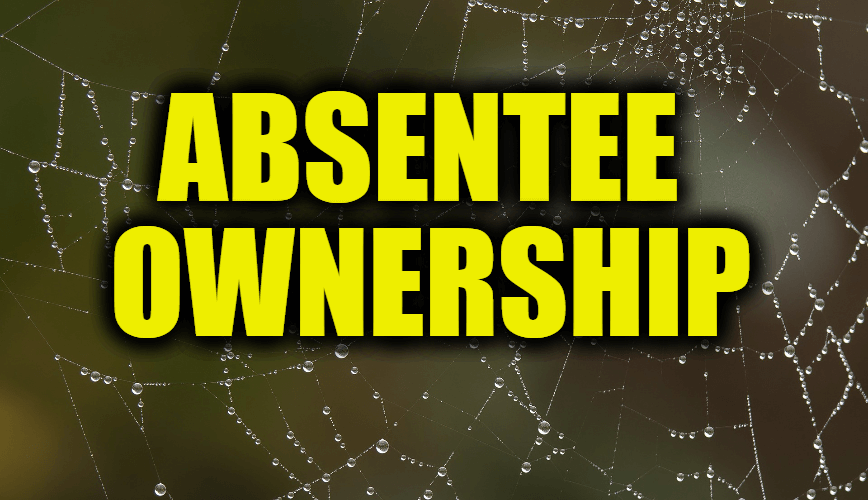 In its original sense, absentee ownership meant land ownership without owner residence on the property. Because the absentee owners of landed estates received income from them but did not cultivate or manage them directly, they were frequently accused of exploiting their tenants. The latifundia, or great landed estates of the Roman empire, were often worked by slave labor while the owners lived in Rome. In prerevolutionary France, many of the nobility lived at Versailles, leaving managers to handle their estates. In the 20th century some governments have confiscated absentee-owned lands and redistributed them for the use of peasants on the ground that land reform was needed to correct economic and social abuses.

In the United States, from the 1870’s until the 1930’s, the problem of farm tenantry on absentee-owned lands received considerable attention. Although that problem is no longer important, a certain amount of absentee land ownership exists among professionals and business executives, who hold the land primarily for recreational use or as a place for retirement.

Absentee ownership in the United States is more interesting in its application to business, where corporate ownership is highly diversified through the device of stocks and other financial arrangements. The control of companies is left to salaried employees often referred to as the “managerial class,” who may or may not own stock in the companies. Early in the 20th century, the economist Thorstein Veblen maintained that a few powerful investors—absentee owners— could control industrial prices and output although they did not participate in the productive processes. Beginning with the 1930’s, increased governmental regulation and control of the economy has offset this danger.