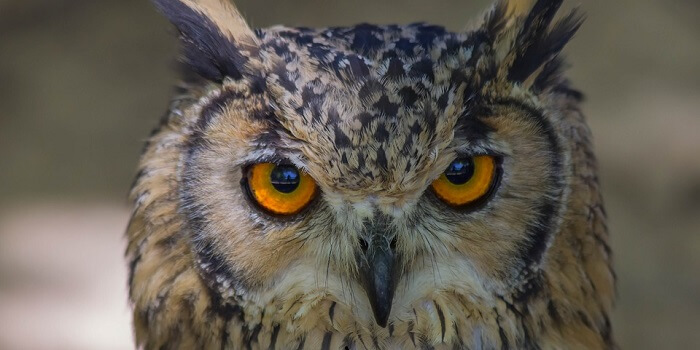 Where do the owls live? Although they can be present almost anywhere, owls do not usually live in extreme cold climates (such as Antarctica). The most common site to find owls are forest areas.

They are territorial and do not hesitate to make notice to unexpected visitors. In this habitat they take refuge during the day and go hunting at night.

Owls usually remain in the same place (territory) throughout their lives. That is, they are not birds that migrate from one place to another, as in other cases where they fly great distances. They are lonely animals. They are not scavengers. Rather they prefer to hunt their own food.

It is a very fast bird. It has a type of large wings that allows them to take a nocturnal flight and completely silent.
They have sharp, long claws that allow them to hold the prey.

They have a type of vision that adapts perfectly to the darkness. For this reason they have 3 different eyelids.
Its auditory sense is extremely developed.

Although they have a tiny beak they defend themselves perfectly against predators and dominate their prey in an appropriate way.

The females have a slightly larger size (around 25%) than the males, ranging from the size of a sparrow to a small eagle.

The eyes of the owls have no mobility in sight. For that reason they can only see forward. From there they developed the ability to turn the head 270º.

Another unique feature of these birds is that each male has only one partner per season. There are even some species of owls that mate for life with the same pair.

What do owls eat? Owls are carnivorous, they usually hunt their smaller prey and often do so at night using their auditory skills and night vision. They can hunt lizards, rabbits, spiders, insects, snails, worms, smaller birds and even some eat fish. Once they catch a prey, they take it to their mouth and do not chew it. The remains of the prey dissolve in the owl’s stomach.

The mating season is close to spring. Like all birds, owls are oviparous, meaning they lay their eggs. Each female usually puts between 2 and 3 eggs. The mating call is made by the males, while the females fly to where the males are for mating.

The breeding is taken care of by both parents but during the incubation period the female remains in the nest and it is the male who goes out in search of food. They do not build their own nests. They prefer to occupy the disused nests of other birds.

Owls have several types of feathers. Some of them much softer allow them to have a sensitivity about everything that happens around them. Once a year the owl changes its feathers but its abilities remain since the process of the molting of the feathers is gradual (it takes approximately 3 months to complete) and is done in sections.

Although it is believed that the owl has the ability to rotate 360 ​​degrees his head is certainly not so, although it has great mobility (due to hunting and nocturnal activities) thanks to its 14 vertebrae. In this way they can turn their head up to 270º.

Although the owl is not a bird in danger of extinction, the truth is that the clearing of its natural habitat produces its mortality and danger, because the species from which they feed, migrate to other places due to the destruction of the natural habitat.