What is Scholasticism? Information about Scholastic philosophy and periods

Scholasticism is the philosophy that developed in the Middle Ages in the schools of the Carolingian Empire and in the medieval universities and that traditionally has been highly regarded by the Roman Catholic Church. Scholastic philosophy may be characterized by three things :

Charlemagne (about 742-814) invited leading scholars of the church to his court and established a Palatine school and a series of cloister and diocesan schools throughout his empire. Out of these medieval centers of learning arose Scholastic philosophy. The term “Scholastic,” or the Latin “doctor Scholasticus,” was applied not only to teachers of the seven liberal arts in these Carolingian institutions and the seats of learning established later, but also to teachers of theology and philosophy. The term gradually came to be applied only to the latter group.

The development of Scholasticism may be divided into three major periods :

The first period is characterized by the controversy regarding the primacy of universals. The second period is marked by the fusion of Aristo-telianism with dogmatic theology, the delimitation of the spheres of faith and reason, and the controversy regarding the primacy of the will over the intellect. The early part of the third period was a time of the decline of Scholasticism, when its rigorous methodology became an end in itself instead of a means of reaching philosophical truth. Beginning in the late 19th century Scholasticism again achieved its traditional balance between insight and method and began to be accepted again as a viable philosophical system. 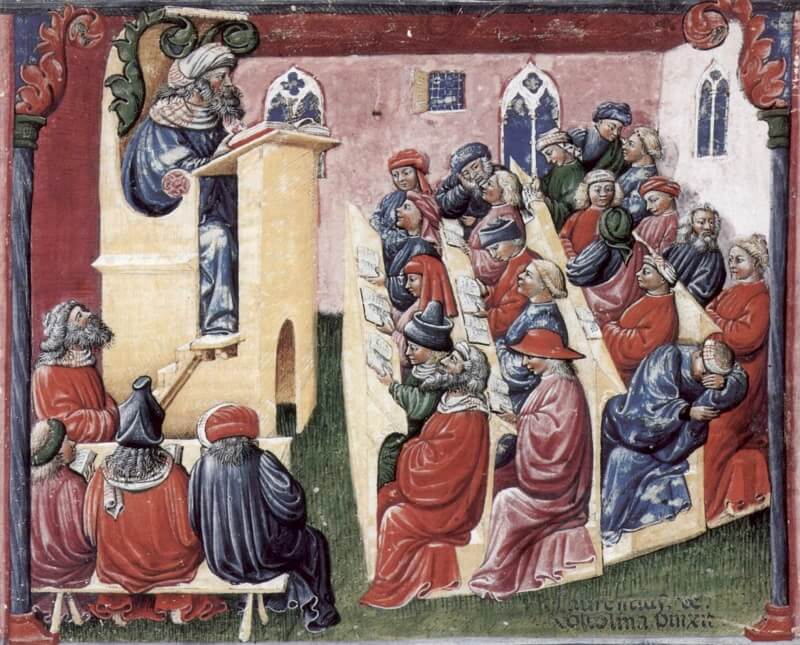 In the first period the chief figures were Johannes Scotus Erigena, who was the earliest notable Scholastic and who fused Neoplatonism with Christian theology; Gerbert, who became Pope Sylvester II and was renowned for his investigations in mathematics and the natural sciences; Roscellinus, who was the reputed originator of Nominalism; Peter Lombard, who was the author of the famous Sentences upon which many later Scholastics wrote commentaries; William of Champeaux, who championed realism against Peter Abelard’s modified Nominalistic position; Anselm of Canterbury, who constructed an onto-logical argument for the existence of God; Peter Abelard, who was the originator of conceptual-ism; and John of Salisbury, who was a part of a reaction to a one-sided Scholastic culture.

The major figures of the second period include Alexander of Hales, who was one of the originators of the “summa,” a sort of encyclopedia of theology and natural science that attained vogue in this period; Bonaventure, who held that philosophy was subservient to theology; Albertus Magnus, who was the most learned man of his age in the natural sciences; Thomas Aquinas, who fused Aristotelianism with Christian theology; Duns Scotus, who was an advocate of the primacy of the will against the determinism of the Thom-ists; and William of Occam, who was an important Nominalist and an opponent of the temporal power of the papacy.

The early schoolmen possessed among other works a meager part of the logical treatises of Aristotle, Plato’s Timaeus, the writings of Bo-ethius Cicero, Seneca, Augustine, Martianus Capella, and Dionysius the Pseudo-Areopagite. The schoolmen of the dominant period of Scholasticism possessed the whole body of Aristotelian writings and the works of Arab and Jewish commentators on them.

One of the fundamental characteristics of the first two periods of Scholasticism was the confusion between the roles of philosophy and theology. Philosophy was understood in a broad sense as the search for truth and wisdom and thus included the natural sciences and other branches of knowledge. In the Christian context of the times, revelation and the reasoned reflection upon it, theology, were considered valid sources of truth and proper data for philosophical speculation. Theology most frequently received the preeminent role because its truth, based on revelation, was accepted as more certain than truth obtained by reason alone.

Philosophy was regarded as the “handmaid of theology,” and its role was to help organize and elucidate doctrine. Scholastic philosophy was peculiarly well suited to this role because of the rigorous logical force of its methodology. Gradually the spheres of theology and philosophy became more clearly delineated, and philosophy itself became limited to the search for truth based upon reason alone. The Nominalist controversy did much to clarify the roles of the two sciences. Yet it is safe to say that throughout there was an intimate connection between the two. Not until the rise of humanism in the 15th century did philosophy and theology become completely separate and often violent opponents.

The most important question for early Scholasticism was the ontological significance of logical genera, or universals. In this controversy the Scholastics split into two great parties, the realists and Nominalists. Realism is the doctrine that genera and species have existential reality, that is, they are entities, and extreme realists regarded such universals as existing apart from and independent of particulars. The for-hiula for the extreme realists was that universals exist ante rem (“before the particular”). The moderate realists held that they exist in re (“in the particular).

The extreme opposition was formed by the Nominalists, who maintained that universals, or genera, are only class names and have no existence apart from the name. A middle party was formed by the conceptualists or ser-monists, who maintained that universals are concepts and have ideal existence as notions in the mind, or, as Abelard more specifically held, the word becomes universal by means of predication. The formula for Nominalism and conceptualism is that universals exist post rem (“after the particular“).

These discussions of the Middle Ages were mainly exercises in abstract dialectic, although they were carried on with great subtlety and genius in logical analysis. However, the question acquired an important bearing by involving the doctrine of the Trinity and the existence of God. According to the realists the greater the universality, the greater the reality; the wider the concept the more extensive its being. God, as the most universal notion, has the most complete reality; as ens generalissimum he is ens realissimum.

Further, the Nominalists regarded as real only the individual, concrete thing. The realists urged against this that according to Nominalism, only the three persons (as individuals) of the Trinity have reality; therefore, there is no Godhead and we have tritheism. Anselm maintained that the universals existed before particular things in the mind of God. The most memorable of the controversies on the subject took place in Paris between William of Champeaux and Abelard, in which the latter gained a dialectic victory.

Scholasticism reached its complete formulation in Thomas Aquinas, who developed a system of philosophy by the fusion of Aristo-telianism with Christian theology and who sought to correlate more precisely than his predecessors had the spheres of faith and reason. Reality and truth are one continuous realm, although certain truths transcend reason and are apprehended only by faith. Faith and revelation do not contradict reason; they transcend it.

An absorbing question for the Scholastics of this period was the psychological question of whether primacy belongs to the will or to the intellect. Does the will determine our ideas, or do our ideas determine the will? Thomas Aquinas was a determinist, while John Duns Scotus represented the voluntarists. Is it the will or the intellect that is decisive in determining character? On the side of the primacy of the intellect were arranged Thomas Aquinas, the medieval Aristotelians, the German mystics, and the Dominicans; while on the side of the will were Duns Scotus, the Augustinians, William of Occam, and the Franciscans. On the question of universals, Aquinas and Duns Scotus took similar ground, namely, that of moderate realism. Both maintained that the universals exist in the mind of God (ante rem) as ideas before creation, substantially and immanently in things {in re), and as notions and names employed by the individual mind (post rem).

The philosophy of the Arabs during the Scholastic era is essentially Aristotelianism combined with elements of Neoplatonism, particularly the emanation theory. Their interest was mainly in medicine, natural science, and mathematics. The chief Arabic philosophers were al-Farabi, Avicenna, al-Ghazzali, and Averroes. They were important as the carriers of Aristotelianism and the seeds of natural science into Europe through Spain. The Jewish philosophy of the Scholastic period is partly the cabala and Aristotelianism. The most important figure, however, was Maimo-nides, who combined the philosophy of Aristotie with Hebrew theology.

Scholasticism went into a period of decline in the 15th century. Humanistic critics with their emphasis on rationalism poked fun at the semantic squabblings of the Scholastics, and Reformers, such as Martin Luther, criticized it for obscuring and perverting the teachings of Christ as found in the Gospels. Thus by the 16th century the term “Scholastic” had become pejorative, signifying obscure and irrelevant mental exercises of little practical use.

Various schools of Scholastic thought were formed as Scholasticism lost its vitality, and these schools were followed by various religious orders, whose almost exclusive property Scholasticism gradually became. The Dominicans adhered strictly to the teachings of St. Thomas Aquinas. The Franciscans generally followed the teachings of Duns Scotus. The Jesuits followed Aquinas, but soon one of their own members, Francisco Suarez, was making positive contributions. However, it would be unfair to characterize the entire early period as one of decline, for there were a number of prominent thinkers, including Suarez, Tommaso de Vio Cajetan, John of St. Thomas, and Francisco de Vitoria.

As Scholasticism began to come to grips with a new era of a divided Christendom, rising nationalism, and a developing science, new subjects began to dominate its discussions. There was a considerable controversy over the relation between grace and free will as well as discussions on the origins of civil power, the morality of war, and the basis of moral law. However, in the 17th and 18th centuries Scholasticism was utilized in the teaching of philosophy and theology in seminaries and religious houses of the Catholic Church but had little influence outside that world.

A revival of interest in Scholasticism, particularly in Thomism, was spurred by Pope Leo XIII in his encyclical Aeterni Patris (1879), in which he urged a return to Thomistic philosophy. This was in part caused by the difficulties of accommodating Catholic doctrine to the dominant philosophies of the day, Kantianism and Hegelianism. In 1879, to further the renewal, Pope Leo created the Roman Academy of St. Thomas to prepare critical texts of the works of St. Thomas. He also ordered the creation of an institute at Louvain University in Belgium for the study of Thomism. By 1917, Thomism had become the required system of philosophy in all Roman Catholic seminaries and church-sponsored universities. Scholasticism in its Thomistic form came to be called the “perennial philosophy,” by which was meant that it could be adapted to meet the needs of each age.

However, it was not until the 20th century that Scholasticism again began to win acceptance in the world at large as a viable philosophical system. Such Scholastic philosophers as fitienne Gilson and Jacques Maritain became known as competent philosophers in a world that had become greatly different from the one that gave rise to Scholasticism.