William Butler Yeats; Irish poet, dramatist, and essayist: b. Dublin, Ireland, June 13, 1865; d. Cap-Martin, France, Jan. 28, 1939. His grandfather and great-grandfather were rectors in the Church of Ireland (Protestant), but his father, John Butler Yeats, broke away by becoming a skeptic in religion and a portrait painter by profession. Yeats spent much of his childhood in Sligo, a port town in the west of Ireland where his mother’s relatives lived. The landscape of this region was always his favorite, and it served him as the setting for many of his poems.

In 1874 the family moved to London, where they longed for Ireland, and in 1880 they returned to Dublin. Yeats was at this time heavily under his father’s influence, which was rationalistic as well as artistic; but partly in filial revolt he began, near the end of his attendance at high school, to show a fascinated interest in the study of occult phenomena. He attended art schools in Dublin from 1884 until 1886, when he committed himself to a literary career. 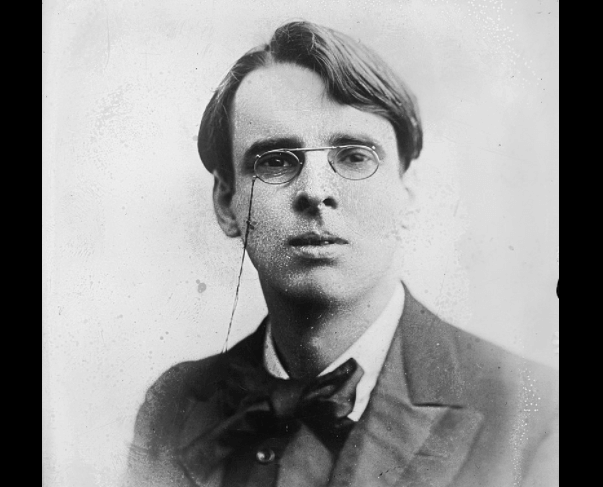 Yeats found everywhere, in Irish folklore, in poetry, and in mystical writings, support for his conviction that literature should concern itself with the dreaming as well as the conscious mind and should rebel against the encroachments of science upon imagination. He gained more adherents to another aspect of his thought, a belief that all art should be national. In the early 1890’s he founded Irish literary societies in both Dublin and London and almost at once became the leader of a school. He urged Irish writers to use Irish landscape, to take themes from Irish legends and sagas, to saturate their work in whatever was local and therefore intimate. On these principles he wrote his first book, The Wanderings of Oisin and Other Poems (1889), and his first important play, The Countess Kathleen (1892). A few years later he and Lady Gregory joined talents to start a new dramatic movement in Ireland, resulting in the founding of the Abbey Theatre in 1904. Yeats was the major influence upon this world-famous theater for the rest of his life, although some of its playwrights, notably John Millington Synge and Sean O’Casey, scored greater popular successes with their plays than he did.

Yeats was one of the first poets in English to make deliberate use of symbolism, so that all his work is closely bound together by an elaborate context of implicit meanings. His poetic development may be divided into two stages. The first, which lasts until about 1900, is characterized by otherworldly and ecstatic themes and slow-paced rhythms. It is associated with his unrequited love for Maud Gonne (1866-1953), a beautiful Irish patriot; his passion for her is idealized to become part of a search for perfection. In the second stage, Yeats takes account of elements that he had previously excluded; his writing is more physical, combative, and salty. He is more aware of imperfection and often indignant with it. Instead of The Shadowy Waters (1900), he writes Responsibilities (1914). His diction comes closer in this second stage to ordinary speech.

The strength and solidity of Yeats’ verse increased as he grew older. These qualities were buttressed by his late marriage, in 1917, to Georgie Hyde-Lees, an Englishwoman, with whom he lived chiefly in Dublin and at their old Norman tower, Thoor Ballylee, in the west of Ireland. They had a son, Michael, and a daughter, Anne. When the Irish Free State was formed, Yeats was appointed one of its first senators (1923-1928), and in 1923 he received recognition of a more international kind by the award of the Nobel Prize for literature.

In the poetry he wrote after his marriage Yeats shared more fully than before the aspirations, regrets, and grievances of the contemporary world. Although his early books continue to have their admirers, he is best known by books written later, especially by The Tower (1928), The Winding Stair (1933), and Last Poems (1940). Here he expressed most memorably his powerful feelings about the possible ruin of civilization, about old age and youth, about moments of sudden illumination and joy, and about the unending debate that goes on within the mind as opposing passions struggle to master each other.

Yeats’ work deals intensely with three basic urges. The first is to be in the midst of things, to live with the delight, ebullience, and versatility of a Renaissance man. Running counter to this is a second urge, to rise above the melee, to contemplate rather than merely to act, to sift wasteful life for its economical, artistic essence. There is a third urge, which Yeats repudiates, although he gives it expression, and this is to seek goodness alone, to become as bodiless as possible both on earth and in heaven. This is the way of the saints, and when faced with it Yeats prefers to stand with “Homer and his unchristened heart.” Much of the effect of his verse comes from its moving affirmation—over frankly admitted obstacles and doubts—of intense, unified, imaginative life.