Pietro Aretino; (1492-1556), Italian Renaissance author, whose works are a mixture of vitality, honesty, and venality, representing the best and the worst qualities of the Italian High Renaissance. Although Aretino had a great influence on 16th century literature, his writing is now mainly of historical interest. 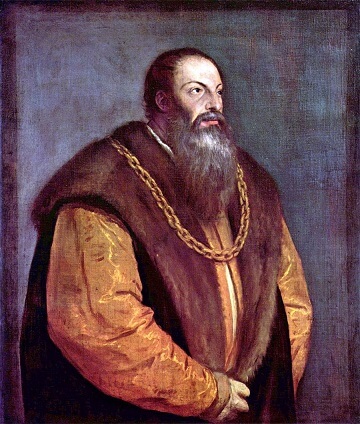 Aretino was born in Arezzo on April 20, 1492, the son of a shoemaker. He studied painting and literature in Perugia. About 1516 he went to Rome, where he secured the protection of the banker Agostino Chigi. He soon attracted attention with his mordantly witty verse, winning the favor of Pope Leo X and Cardinal Giulio de’ Medici, whose candidacy for the papacy he later supported by writing libelous pasquinades about the other candidates. The ferocity of his satire earned him many enemies in Rome, and he went to Venice in 1527. He died there on Oct. 21, 1556.

Aretino was a Renaissance adventurer who succeeded in gaining fame and fortune through the power of his pen. Feared by many of the prominent men both in and outside of Italy, he was called the “Scourge of Princes.” Widely known as the arbiter of men’s reputations, he lived like a prince on the rich gifts and pensions given by those who feared his satire or by those who wished to buy the fame that resulted from his adulation. Among his most distinguished patrons were King Francis I of France and Emperor Charles V.

Aretino wrote a tragedy, Orazio (1546), and five comedies. The best of his comedies, La cortigiana (1526) and La talanta (1542), have a spontaneity and verve not found in other Italian writing of the era. Arentino’s satirical dialogues, including I ragionamenti and I dialoghi, are vivid indictments of contemporary morals in Italy. His letters, which have been collected in six volumes, have a lively descriptive power that makes them important documents of 16th century history.