ACTING is the art of portraying a character in the theater, films, or other media. However, it is a complex art, and there is no really satis-factory simple definition. Success in acting is achieved only by the relatively few persons who combine natural talent with well-developed techniques, dedication, and self-discipline. Even the greatest aetors are frequently aware of how limitations of talent or technique keep them from realizing the full possibilities of the roles they play. In motion pictures, stardom is sometimes achieved through a combination of a high degree of personal magnetism and physical attractiveness. These are rare gifts to be exploited by ( skillful directors and cameramen, but such stars seldom achieve true greatness unless they develop their craft through arduous training and long experience.

Acting is often compared to children’s make-believe games. To some extent the comparison is apt, and to a degree it is helpful in understanding what an actor does when he is creating and performing a role. With his kings and queens, his cowboys and Indians, or his spacemen, the child projects himself into a make-believe world. From his imagination—triggered by his own experience, limited though it may be—he provides circumstances of time, place, and relationships between the characters. He then proceeds to behave, that is, to speak and to perform physical actions, in a manner that he believes is appropriate to these circumstances. If the game is to prove interesting, these circumstances must provide a reason for carrying out the actions. He has to rescue the princess from the enchanted castle, or rid the town of dangerous bandits, or get his space-ship into orbit without being detected by the enemy. A child with imagination can become involved in such a game to the extent that it has for him a degree of reality, and he may become resentful of adults who intrude into his make-believe world. 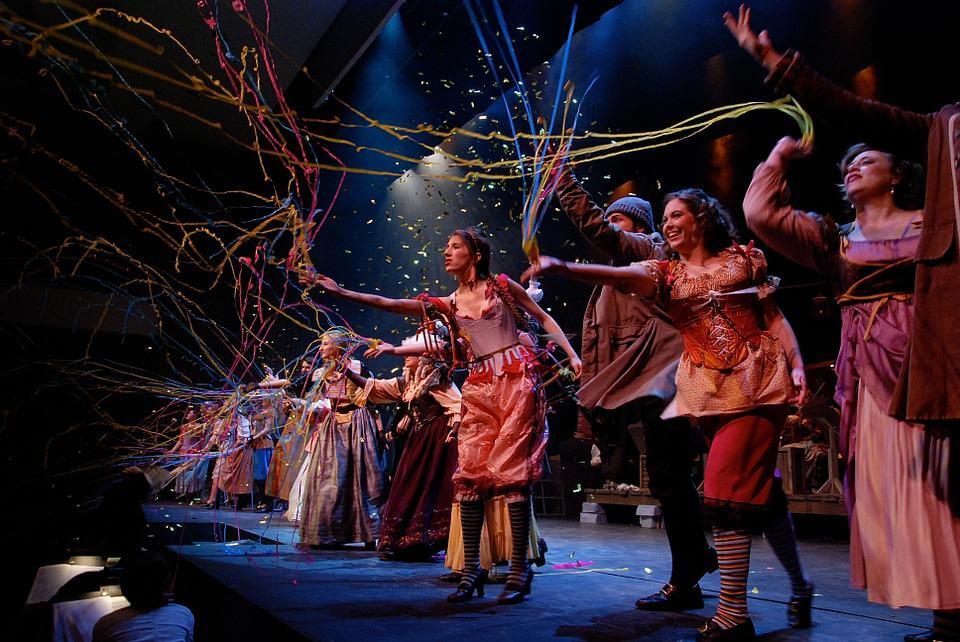 Playing this kind of game is similar in many ways to acting. The playwright provides the basic circumstances of time, place, and character relationships; he gives the aetors lines to speak. suggests physical actions, and certainly implies (although he may not specifically state) the purpose behind each character’s behavior. Like the child’s, the actor’s imagination is triggered by these circumstances, and he proceeds to accomplish his purpose by speaking the lines and carrying out the actions in the way he believes is most suitable. Like the child, he may become so involved in what he is doing that the irnaginary world displaces the real world to some extent. The ability to achieve such involvement is an important part of an actor’s technique because it enables him to concentrate his attention on his stage tasks and consequently to draw the attention of the audience. For both actor and child there is nothing mystic or hypnotic about this involvement. It is similar to the experience all people have had of beeoming so absorbed in an activity that they lose some degree of consciousness of the world around them.

But acting is much rnore than beeoming involved in an imaginary world. It is different from, or perhaps it is better to say that it extends, the game of make-believe in several ways. One of these ways has already been suggested by the statement that the imaginary circumstances, ineluding the words to be spoken and many of the physical actions to be performed, are given to the actor by the playwright. The actor must be able to say the words and perform the actions spontaneously, as if he had thought them up himself. He must be able to do this in front of others and whenever he is called upon to perform. In the professional theater he must effectively repeat his performance eight times a week and often for a period of many months. Furthermore, his ultimate aim is to induce an audience, not himself, to believe in the imaginary world of the stage.

To accomplish his purpose, the aetor develops two kinds of techniques. They are interdependent, but distinct enough to be discussed separately. They can be designated as the outer and inner, or the erternal and internal, techniques. The accomplished actor is well trained in both and uses both as fully as possible.

A most important part of the outer technique is the training of the body and the voice so that the actor’s physical equipment becomes an effective instrument. A musician plays on a violin, a piano, or a trumpet, but the actor’s instrument is his own body. He must learn to move with the greatest possible efficiency. He must train his body so that it can assume the appearance of a hunchbacked beggar or a mighty king. He must learn to speak so he can be heard clearly and understood easily without unintentional provincialisms. He must be able to speak blank verse and rhymed couplets. He must train his voice so he can speak like a guttersnipe or a grandee. Even more, he must develop both his voice and body so that they respond immediately and instinctively to subtle changes of thought and feeling. This training requires determination and self-discipline. It must be carried on over an extended period of time (a lifetime, in fact, for a true artist never ceases to study) and under the direction of competent teachers.

Other outer techniques include skill at make-up, which enables the actor to change the appearance of his face and hair to suit the character he is playing and the period of the play, and the ability to wear costumes and use costume accessories (fans, swords, walking sticks, snufl’boxes) of any historical period. It is quite possible that a young actress engaged by a summer stock company might have to play a medieval princess, a Renaissance lady-in-waiting, an 18th century scullery maid, a Victorian governess, and a modern working girl—all within a few weeks’ time. If she is well trained, she will have a knowledge of the speech and manners of the periods, and social classes involved.

Until about 1940 all training for actors and all writing about the process of acting were concerned almost exclusively with the development of an external technique. During the 19th century, actors (and would-be actors) studied elocution and deportment. It was always recognized that the outer techniques alone did not make an actor, but it was assumed that whatever else was necessary was a matter of natural talent, which could not be consciously trained. 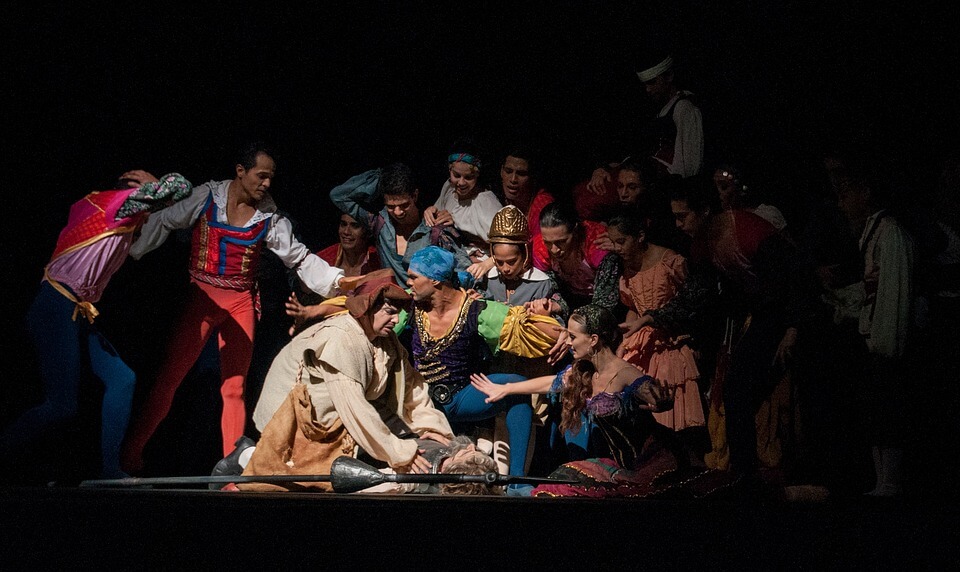 The man responsible for finding ways of developing an inner technique was Stanislavsky. An actor and a cofounder in 1898 of the famed Moscow Art Theatre, Stanislavsky spent a great part of his life exploring the creative process of acting. He divided the process into three principal parts and published the results of his work in three important books —An Actor Prepares (Eng. tr, 1936), Bitilding a Character (Eng. tr., 1949), and Creating a Role (Eng. tr., 1961).

The first book is concerned with the development of the actor’s “inner resources.” It recognizes that he must learn to relax under the pressure of having to perform before an audience, so that no excessive muscular strain interferes with concentrating his attention on carrying out his tasks. It emphasizes the necessity of an actor’s having an objective or intention, that is, of his knowing what the character he is playing wants to accomplish, scene by scene and in the play as a whole. Stanislavsky called this objective the “motivating force” behind the character’s behavior and stressed that everything the actor does and says throughout his performance should serve in some way toward accomplishing his objective. The book maintains that actors must carefully observe both themselves and the world around them, so that their behavior on stage will be truthful. It describes exercises in improvisation (similar to children’s make-believe games) to help the actor respond freely to imaginary circumstances. It helps the actor to discover ways of inducing sensory and emotional responses without forcing them.

The key ideas in the above paragraph—relaxation, concentration, objectives, motivating force, observation, improvisation, imaginary circumstances, and sensory and emotional responses —arc some of Stanislavsky’s principal concepts for developing “inner resources.” They point the way to an internal technique by which the actor learns to use his mind, his senses, and his feelings as effectively as he learns to use his body and voice. This approach to acting has become known as the “Stanislavsky system.” Anyone seriously interested in acting will profit by studying Stanislavsky’s books with great care and can gain further understanding from some of the materials that have been published about his theories.

While An Actor Prepares primarily concerns the actor’s work on himself and his “inner development,” Stanislavsky’s other two books consider the way an actor develops a character given him by a dramatist, the way he brings the character into existence on the stage, and the way he uses his performance to communicate the playwright’s meaning to an audience. Building a Character discusses the effective use of the body and voice, making clear Stanislavsky’s belief that the actor must use both internal and external techniques if he is to realize fully the possibilities of his art.

Stanislavsky did not invent a system of acting. He discovered what the world’s finest stage performers have always done, then set down a series of principles and exercises that permit talented young aetors to learn to do what formerly was accomplished either through trial and error or through intuition. There are accounts of aetors as long ago as the classic period in Greece who used inner techniques identiçal with Stanislavsky’s principles.

Stanislavsky has had great influence on the art of acting, especially in the United States. His methods have been disseminated by both actors and teachers who worked and studied with him, as well as by those who became acquainted with his ideas through his writings. In the 1950’s a fascination with the inner teehnique caused some American actors to neglect the training of the voice and body and to underestimate its importance. At the same time, British and Çontinental actors tended to favor the development of externals. In the 1960’s the necessity of a more balanced approach has been recognized.