French Revolutionary Wars European conflicts in which France was involved between 1792 and 1800. The general European war that began in 1792 can best be understood against the background of both revolution in France and balance-of-power politics in Europe. For an account of the events in France during this period, see France—Revolution, Consulate, and Empire.

Despite internal problems, France in 1789 was the strongest power in Europe. Its great wealth and highly developed bureaucracy more than counterbalanced Russia’s greater population and Prussia’s military efficiency. Only Britain, under the most favorable circumstances, could challenge France, but British foreign policy had been in disarray for 30 years.

International relations just before the revolution were abnormally unsettled. Wars, rebellions, and crises confused the international diplomatic scene. In the 1780’s, Britain and France were distracted by domestic troubles, which allowed Austria, Russia, and Prussia to assert themselves in European politics. Weak and crumbling Poland, already reduced by partition in 1775, was the focus of their ambition and rivalry. Since France had traditionally protected Poland, these powers saw the revolution in France as more of an opportunity than a threat. 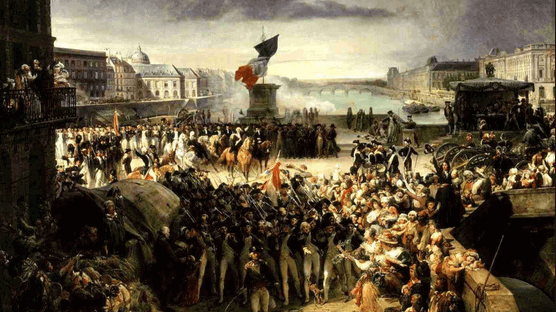 Tension grew between Louis XVI and the representatives of the people in the National Assembly and its successor, the Legislative Assembly, and by 1791, Louis XVI and the representatives were deadlocked. Both sides had concluded, for different reasons, that a foreign war would be politically advantageous. But the army was disintegrating: noble officers had emigrated in large numbers, and the local Jacobin clubs worked to indoctrinate the troops with radical ideas. Only the National Guard, a middle-class militia that had sprung up in 1789 to keep domestic order, promised to bring new military strength to the revolution. Friction with Austria was increasing, and as the King grew more openly hostile to the revolutionary program in 1791, the Legislative Assembly called for 100,000 volunteers and mobilized National Guard units in the frontier regions.

On April 20, 1792, the Assembly declared war on the Austrian monarch, who as Holy Roman Emperor had extended protection to the Rhineland states where French emiges were forming an antirevolutionary army. Prussia and, later, the kingdom of Sardinia joined Austria.

The opening battles shocked France. A French attempt to invade the Austrian Netherlands (Belgium) ended in a rout. Demoralized French troops murdered their officers, and whole units deserted to the enemy. But the main threat was at Coblenz, where Charles William Ferdinand, Duke of Brunswick, assembled a combined Prussian-Austrian army to enter France through the Moselle Valley. His manifesto promising to punish anyone who harmed the French royal family was published in Paris on August 1, triggering the insurrection on August 10 that overthrew the monarchy.

In fact, the Austro-Prussian strategy was cautious and equivocal. Brunswick wanted only a firm base inside the frontier, and he hoped that his mere appearance would encourage an antirevolutionary uprising. For both Prussia and Austria the main problem was in the east, where a Russian army had moved into Poland; thus they feared overcommitment in the west. Verdun fell to the Prussians, but the French under Gen. Charles Dumouriez threatened the enemy rear, forcing Brunswick to turn and fight at Valmy on Sept. 20, 1792. The French stood firm during an artillery duel, and Brunswick declined to make a costly infantry assault. His army, sick and hampered by bad weather, withdrew toward the Rhine. Dumouriez then turned on the unsupported Austrian army in Belgium, defeating it at Jemappes on November 6. At the end of 1792, French troops were in Brussels, Frankfurt, Nice, and Savoy.

The French invasion of the Low Countries brought Britain into the war in February 1793, both to protect its interests there and to exploit obvious French weakness overseas. In a series of bilateral treaties, Britain forged an anti-French coalition that included Austria, Britain, Prussia, Russia, Spain, and Holland. But the aims of this First Coalition were never clear. It was further weakened when Russia and Prussia excluded Austria from the Second Partition of Poland in 1792. The Allies expected, however, merely to fight a short war, expelling the French from the Low Countries and Rhine-land and extracting some compensation for their trouble. 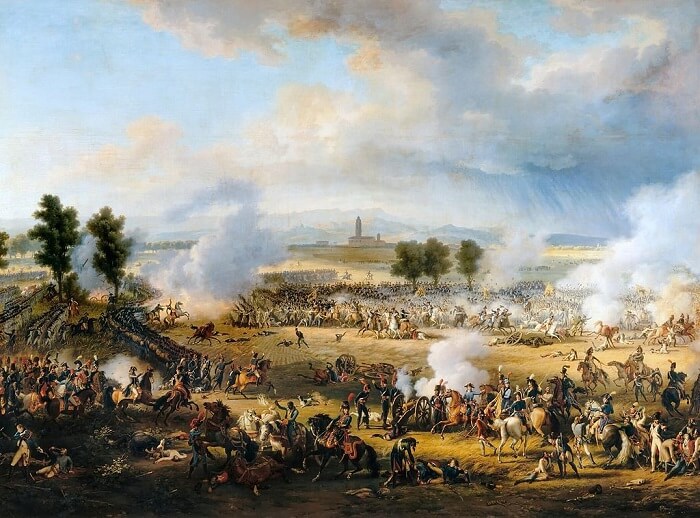 A reinforced Austrian army entered Belgium, and a British force prepared to land in Flanders. Dumouriez tried to stop the Austrian advance on March 18 at Neerwinden. Defeated, he blamed the French government, tried to march on Paris, and then defected to the enemy. As in 1792, the door to Paris seemed open, but Allied disunity helped save France. Prussia, heavily committed in Poland, exerted little pressure west of the Rhine, while on the Belgian frontier Austria and Britain pulled in opposite directions.

In February 1793, France’s new governirjpnt, the National Convention, voted a draft of 300,000 men, and members of the Convention were sent to the armies in the field with full powers to take drastic action. Conscription was resisted almost everywhere, civil war broke out in the Vendée, and the naval base at Toulon was betrayed to the British. But somehow men were raised and armed, generals were replaced, and armies were reorganized. In August, the conscription of all single men aged 18 to 25 was decreed, the famous levée en masse.

Helped and driven by the government, French armies at Hondschoote forced the British away from Dunkirk on September 8 and in October stopped the Austrian advance at Wattignies. In December 1793 the rebel army in the Vendée was crushed, and Toulon was retaken. By the spring of 1794 a million Frenchmen were under arms.

As France grew stronger, Allied interest in the war declined. No longer did cheap victories seem likely, and the coalition fell apart in 1794—1795. A Polish uprising in 1794 forced the Russians to drop out. The Polish question also poisoned relations between Austria and Prussia, and Prussian failure to give promised help in the Low Countries angered the British, who decided to evacuate Flanders. British control of the sea was secured by driving a French fleet back into Brest. But when the French repulsed a major Austrian attack at Fleurus on June 26, 1794, momentum on the Continent clearly passed to France.

The French again pushed the unsupported Austrians out of Belgium and by the end of 1794 had invaded Holland, swept the enemy from the Rhineland, crossed the Pyrenees, and seized the western passes of the Alps. The Prussians, inactive in 1794 and more worried by Russia than by France, made peace in April 1795, the Dutch in May, and the Spanish in July. When France allied itself with Holland (1795) and Spain (1796) their colonies were opened to British naval attacks. Austria, tacitly conceding Belgium, fought for compensation elsewhere and in 1795 was able to stop a French offensive across the Rhine. But the main international event of 1795 was the Third Partition, and disappearance, of Poland.

The New System of War.

The First Coalition had done much to defeat itself, but revolutionary France had also shown astonishing military power. Conscription based on democratic equality, instant promotion or punishment of officers for success or failure, and a frenzied emotional climate combined to produce a new style of warfare. By 1794 the new style had hardened into a system with which the Allies could not cope. Allied armies were mercenary, expensive, and not easily replaced. War for the Allies was a game of profit and loss, not a struggle for national existence. Although French troops cbuld be beaten, the price was frequently too high, and more than once Allied caution had given way before French boldness.

By 1795, however, the new system was exacting its own price in France. The overthrow of Maximilien Robespierre in 1794 had ended the severe economic measures needed to support a huge army. When the government could not pay and feed its soldiers, discipline deteriorated. The new government (the Directory) wanted to use military strength only as a means of making peace on the basis of “natural” frontiers. Despite the Directory’s intentions, the needs of the new system of war would drag France into an endless military adventure. 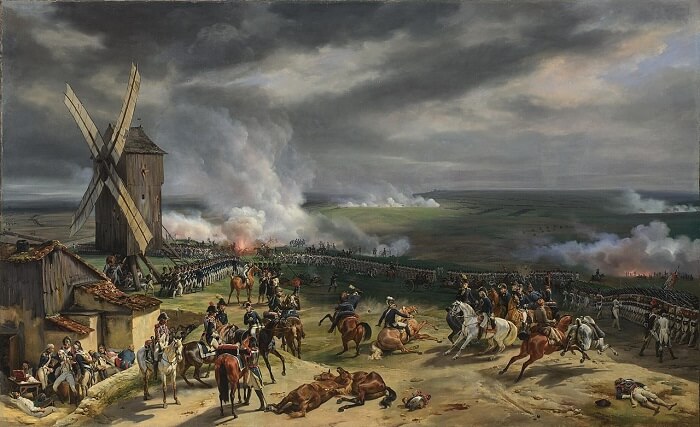 French plans for 1796 called for a major offensive in Germany to bring Austria to the peace table. But the new French commander in Italy, General Bonaparte, upset all plans. Bursting over the Apennines from the Italian coast near Genoa in April, he and his ragged army forced the war-weary Sardinians to make peace. In a campaign of unmatched brilliance, he drove the Austrians out of Italy by June 1796, despite their repeated and costly efforts to return. While the French offensive in Germany bogged down, Bonaparte conducted his own foreign policy in Italy, setting up Jacobin republics in Austrian Lombardy and part of the Papal States. Little except manpower came from France, but Paris received enormous funds extorted from the Italians by Bonaparte.

After he had repulsed the last Austrian coun-teroffensive, at Rivoli on Jan. 14, 1797, and after the key fortress of Mantua had fallen to him on February 2, Bonaparte drove toward Vienna. In Germany, the resumed French offensive also made progress. Above all, the Directory wanted the left bank of the Rhine. But on April 18, Bonaparte concluded a general armistice at Leo-ben that in effect traded French military success for Austrian acceptance of a republicanized Lombardy, leaving the Rhineland outside France. In October, in the final treaty of Campoformio, Austria traded Belgium, which it did not want, for a hitherto independent Venetian territory, and conceded only that France might get the Rhine-land at a future congress to be called to reorganize Germany. Thus France moved beyond its “natural” frontiers by undertaking major commitments in both Italy and Germany.

Defeat of the Second Coalition.

Britain alone remained at war with France in late 1797. Defeat of the Spanish and Dutch navies maintained British control of the sea; but Britain’s own navy was racked by mutiny, and the government faced internal disorder. Negotiation with France was tried and failed, as the Directory, like its generals, grew more aggressive. The French Army moved into Switzerland and southern Italy, setting up new republics. When Bonaparte rejected an invasion of Britain as not feasible, the Directory approved his bizarre plan of striking at Britain by attacking Egypt, where he landed in July 1798.

Blatant French aggression enabled Britain to form the Second Coalition in December 1798. Russia and Austria joined, but Prussia declined. Capt. Horatio Nelson had isolated Bonaparte in Egypt by destroying his fleet in August 1798. In early 1799 the Austrians forced the French out of Cermany, while a strong Russian army defeated the over-extended French garrison of Italy. Another Austro-Russian army pressed the French back in Switzerland, and an Anglo-Russian force landed in the Dutch Netherlands. Antirevolu-tionary outbreaks occurred in Italy and were expected in Switzerland, Holland, and France.

The Directory, discredited by defeat, was reorganized in June 1799, and readily quashed uprisings in southwestern France. The British made no progress in Holland, and, when they got no help from the Dutch, finally evacuated their force. An Austrian shift of troops to Germany let the French in Switzerland defeat the exposed Russians. Czar Paul I, disgusted by Austrian and British bungling, called his army home. The crisis had already passed for France when Bonapar.te, who had left his army in Egypt, led a successful coup d’etat on November 9 (18 Brumaire ).

Bonaparte, at the head of the new government, narrowly defeated the Austrians in Italy at Marengo on June 14, 1800. But not until French troops had moved deep into Bavaria and won the Battle of Hohenlinden on December 3 would Austria negotiate. The French army in Egypt was lost, but the Second Coalition was beaten, and the stage was set for the brief interval of peace between the Revolutionary and Napoleonic Wars.