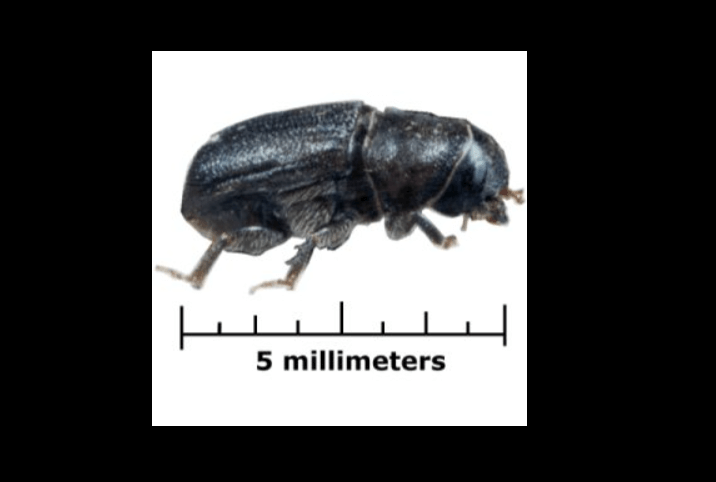 Bark Beetles, are a group of insects that feed on the inner bark of trees. Bark beetles are small, usually less than one third of an inch (1 to 8 mm) in length and cylindrical in shape. They usually have a projection from the front of the fourth joint of the leg. Their antennae, divided into 11 or 12 segments, may have knoblike protuberances. These beetles are usually brown or black.

Bark beetles live beneath the bark of a tree. The adult bores into the tree and excavates a tunnel or gallery. In this “brood gallery” the adult female lays her eggs. When these eggs hatch, the larvae excavate tunnels away from the original “brood gallery.” At the end of the tunnel, the larvae will become pupae and emerge through a hole the size of a bullet hole; for this reason these beetles often are called “shot-hole borers.”

Sometimes they are called “engraver beetles” because the tunnels they excavate often form a characteristic design. Bark beetles cause millions of dollars of damage to forests each year. They kill many trees, especially evergreens, and also transmit some tree diseases.

Bark beetles belong to the family Scolytidae, which contains numerous genera, including Ips and Dendroctonus. The western pine beetle (Dendroctonus brevicomis) is representative.