FERTILIZATION is the union of the male and female germ cells (sex cells or gametes) known as the spermatozoon and the egg, or ovum. Fertilization marks the start of development of a new individual. The central event of fertilization is the coming together of maternal and paternal hereditary elements—an essential step in biparental inheritance. Since each germ cell contains the reduced, or haploid, number of chromosomes as a result of meiosis, the union of the two germ cells restores the diploid chromosome number normal for the species. The sex of the individual is also determined at fertilization.

In mammals and most other animals, the spermatozoon must penetrate one or more protective coats, or investments, surrounding the egg in order to fuse with the egg. Fusion provides a stimulus, and the egg, which awaits fertilization in a dormant state, is then activated to begin developing. At fusion, the sperm nucleus is introduced into the egg and becomes the male pronucleus, which moves through the egg to meet the egg nucleus, or female pronucleus. The two pronuclei unite, and egg and sperm come together and begin to divide.

In single-celled organisms, obvious distinctions between male and female gametes tend to disappear, and fertilization then involves the fusion of two similar cells, or in some cases, the exchange of nuclei between such cells. In bacteria, fertilization is relatively simple; part of a single chromosome is passed from a donor cell to a recipient cell.

Fertilization in plants is basically the same as in animals, except that in higher plants (angiosperms), fertilization may be described as double. At pollination (the transfer of pollen from male to female organs), the pollen grain attaches to the stigma (female part) of the flower. A pollen tube, bearing two male nuclei, grows down from the stigma to the egg cell and releases the nuclei. One male nucleus unites with the egg nucleus, and the other unites with a pair of so-called polar nuclei. The nuclei of the embryo arise from the first union, and the nuclei of the endosperm (food storage organ for the embryo) arise from the second union. 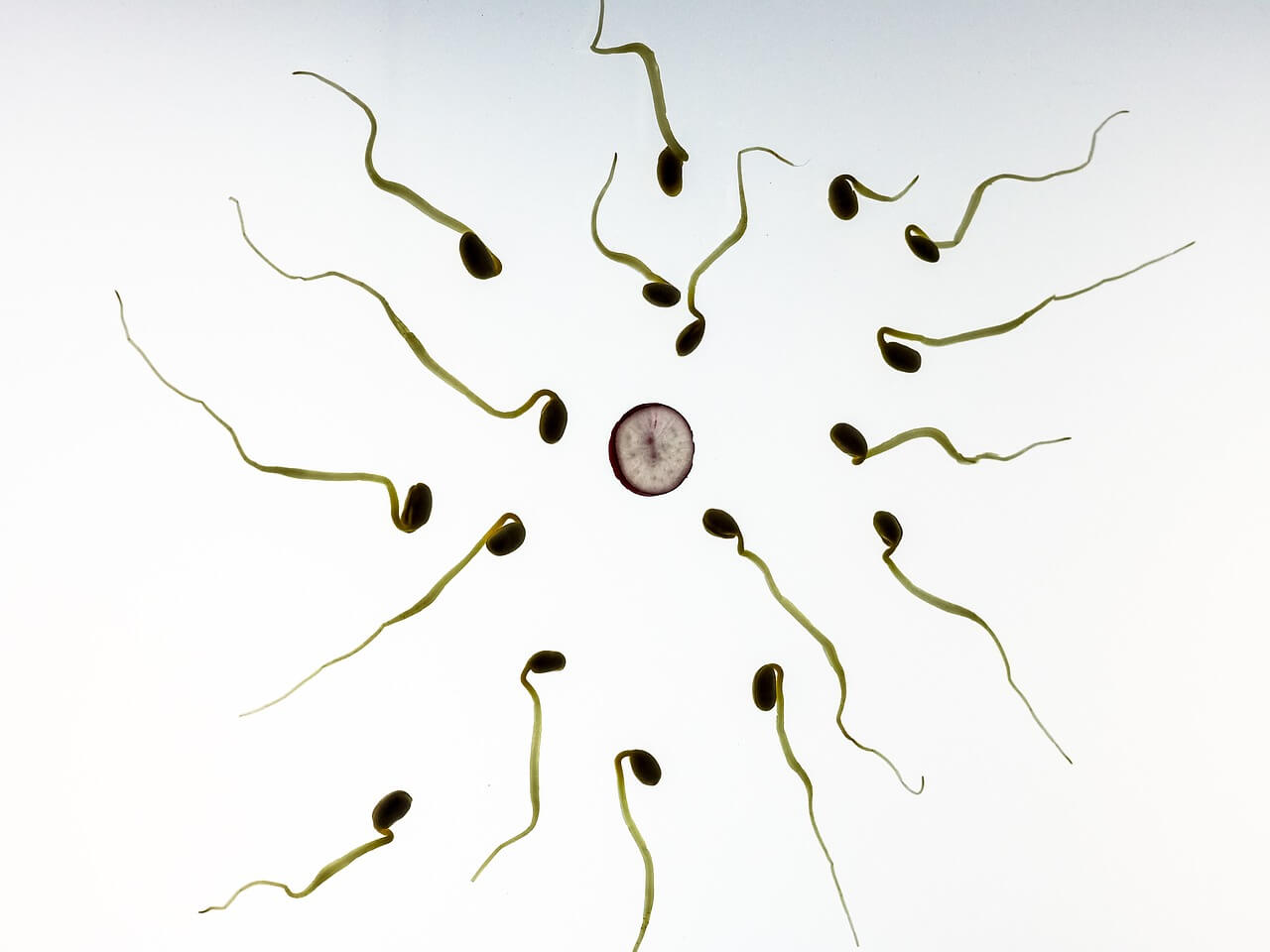 Fertilization in animals may be either internal or external. Mammals, birds, reptiles, some fish, some amphibians (salamanders and newts), and many invertebrates (insects, spiders, many mollusks, and some worms) practice internal fertilization; that is, the eggs are fertilized inside the female’s body. In contrast, other fish, other amphibians (toads and frogs), and other invertebrates (octopuses, squids, sea urchins, and the Palolo worm) practice external fertilization, with the eggs being fertilized after they are shed from the female’s body. As a rule, eggs that are fertilized externally are produced in much larger numbers than eggs that are internally fertilized, presumably because the risks and the wastage are greater when the eggs are exuded from the female’s body.

In most mammals and some plants (for example, the ginkgo tree), the sexes are separate, and the male and female gametes necessarily come from different individuals; the union of such gametes is known as cross-fertilization. In other animals, such as a few fish, the sea squirts, and various worms, and in most higher plants, each individual (a hermaphrodite) contains the organs of both sexes. In these species, fertilization between gametes of the same individual can occur in a process known as self-fertilization. Self-fertilization has the advantage of providing greater certainty that gamete union does take place, but it has the disadvantage of precluding the mixing of different sets of hereditary factors, thereby militating against the adaptive evolution of the race. Even in hermaphrodites, however, the timing of gamete production and the disposition of male and female organs favor cross-fertilization, and self-fertilization is, as it were, saved for an emergency.

When the mammalian spermatozoon is deposited in the female genital tract, it is not immediately capable of taking part in fertilization but must first undergo a physiological change known as capacitation. This sperm change is quite slow, taking from one to five hours in different species. Capacitation is apparently brought about by ttnteraction with female tract secretions, but its exact nature is not understood.

Entry of Spermatozoon into Egg.

Contact of the spermatozoon with the egg is considered to be due to chance alone, since there is no good evidence for chemical attraction between sperm and egg except in lower plants. Penetration of the spermatozoon through the egg’s two protective coats—the cumulus oophorus and the zona pellucida—is made possible by the release of liquefying agents (lysins) from the acrosome, a saclike structure on the head of the sperm.

Fusion of the spermatozoon with the egg itself begins with the union of the two cell membranes. At this point the two gametes effectively consitute a single cell. Following the subsequent conjugation of male and female pronuclei, the cell is called a zygote, and the successive subdivision, or cleavage, of the zygote marks the beginning of embryonic development.

In the eggs of many animals, there is a series of changes that tends to prevent the penetration of more than one spermatozoon into the egg. The changes vary with the species. In sea urchins, for example, the elevation of a fertilization membrane prevents penetration of more than one spermatozoon. In mammals the zona pellucida becomes impermeable and the egg unresponsive to spermatazoa. When the protective devices fail, pathological polyspermy results.

In most mammals the egg passes from the ovary to the oviduct after it has undergone the first meiotic division and formation of the first polar body—the first step in its ripening, or maturation, process. After this occurs, the chromosomes of the egg become involved in the second meiotic division, but the division process is arrested at an early stage (metaphase) and does not normally proceed until the egg is activated by the entrance of a spermatozoon. After activation, the second meiotic division is completed, and the second polar body is emitted, thus ending egg maturation. The female pronucleus then forms around the chromosomes remaining within the egg.

This course of events differs in detail in various species. In the dog and fox, for example, the egg leaves the ovary before the start of maturation, but meiosis is still arrested at metaphase of the second meiotic division. In sea urchins, egg maturation is completed before activation, but cleavage does not occur until the egg is activated.

Biochemical Activation of the Egg.

The biochemical aspects of egg activation have been investigated almost exclusively in sea urchins, starfish, mussels, and clams because the eggs of these animals are available in vast numbers. Egg activation involves changes in both energy utilization and protein assembly. The energy changes are rather variable; in some species, eggs increase their oxygen uptake immediately after sperm entry, while in other species this phenomenon is not equally evident.

The most detailed studies have been made on protein synthesis. Before egg activation, protein synthesis is at a very low level. All the essential machinery for protein synthesis is present, but the system is blocked—the guiding information (in the form of messenger RNA) is unable to reach the agents (ribosomes) responsible for protein assembly in the cell. The unblocking of the protein assembly system at activation is apparently due to the release of the enzyme trypsin from lysosomes. Protein synthesis then starts and increases in rate throughout early embryonic development. One very interesting fact observed in many of the species studied is that the genetic information that controls protein synthesis comes solely from the egg up to a late stage (gastrulation) of embryonic development, and it is only after gastrulation that the influence of the genetic

information introduced by the spermatozoon is detected. In mammals, however, the genetic influence of the sperm seems to begin much earlier.

Cleavage of the zygote depends on the division apparatus, which consists of two small bodies known as centrioles and a structure that develops between them known as the achromatic spindle. Movements of the spindle are responsible for separating groups of chromosomes and for inducing division of the cytoplasm into two halves. According to the classical view, the egg when ready for fertilization has only one centriole, and the spermatozoon contributes the second centriole needed to form a spindle. There are, however, reasons for doubting the general validity of this theory because in many instances the spindle arises independently of the sperm centriole.

The level of fertility (the ability to reproduce) is dependent on factors such as the number of eggs produced, the quality of the male semen, the normality of the female reproductive tract, and the health and nutritional status of the mother during pregnancy. The actual process of fertilization is remarkably dependable. Errors occur, however, mainly due to deterioration in the gametes. The important cause of gamete deterioration is aging; gametes have relatively short fertile lives and are very sensitive to disturbances in the timing of fertilization. The aging of eggs can lead to anomalies such as polyspermy, polygyny (the presence of two sets of chromosomes in an egg), and chromosome loss or misplacement—conditions that are usually fatal to the resulting embryo. The aging of spermatozoa may also cause embryonic death.

The various types of contraceptives reduce fertility by affecting either the release of eggs from the ovary, the motility or viability of the sperm, or the course of embryonic implantation and development. Increasing the level of fertility in women with reduced fertility is often possible, chiefly through the administration of hormones.

Several variations in the process of fertilization are known. Some are normal in some organisms and abnormal in others, while others are abnormal in all forms.

Gynogenesis occurs when a spermatozoon activates an egg but fails to contribute its hereditary material to the embryo. Gynogenesis is a normal process in a few fish, beetles, moths, and worms. In the Amazon molly, for example, there are races consisting of only females; multiplication depends on activation of the eggs by spermatozoon from males of other, bisexual, races.

Androgenesis is the complement of gynogenesis. In androgenetic development only the sperm nucleus participates, the egg nucleus having been artificially removed or damaged by irradiation or chemical treatment. Androgenesis is not known to occur normally. Merogeny is essentially the same as androgenesis, but the term is used more specifically to refer to fertilization of a nonnucleate fragment of an egg.

Polyspermy results from the entry of more than one spermatozoon into an egg. Polyspermy is normal in animals with large eggs—such as some birds, reptiles, sharks, and rays—and in some plants. In these cases, the extra spermatozoa play no further part in the fertilization process. By contrast, polyspermy is abnormal in mammals, bony fish, frogs, most insects, and some plants, and when it occurs in these forms, the extra spermatozoa become implicated in and interfere with the fertilization process, causing abnormal development.

Polygyny, or digyny, results when an egg does not form a second polar body. Both the set of chromosomes normally left in the egg and the set normally extruded in the polar body remain in the egg, and each gives rise to a female pronucleus. Therefore, after fertilization, the egg has three pronuclei (two female and one male). In frogs and salamanders, an embryo resulting from polygyny may develop into an adult, but in mammals it generally dies well before birth.

It is simple to obtain fertilization in vitro (in an artificial environment) with the germ cells of animals like the sea urchin and the frog, in which fertilization is external. Although mammalian eggs need very special conditions, it is now also possible to achieve high rates of in vitro fertilization with the eggs of the rabbit, mouse, hamster, and man. Early embryonic development in vitro, following in vitro fertilization, has also proved possible with rabbit and mouse eggs. However, many problems remain before the whole course of development of any mammal can be obtained in vitro.