In 1839, John Augustus Sutter, a German-born Swiss citizen, received permission from the Mexican government to establish a colony in the interior of northem California.

He settled with his party on the south bank of the American River near its confluence with the Sacramento, and began raising crops and livestock and building his fort. Soon after the occupation of California by American forces in 1846, Sutter found such a good market for his produce along the northern California coast that he had several hundred men working for him.

In January 1848, Sutter’s chief carpenter, James W. Marshall, discovered gold in the trailrace of Sutter’s mili at Coloma, on the south fork of the American River northeast of the present site of Sacramento. Within a few months, the gold rush was on. 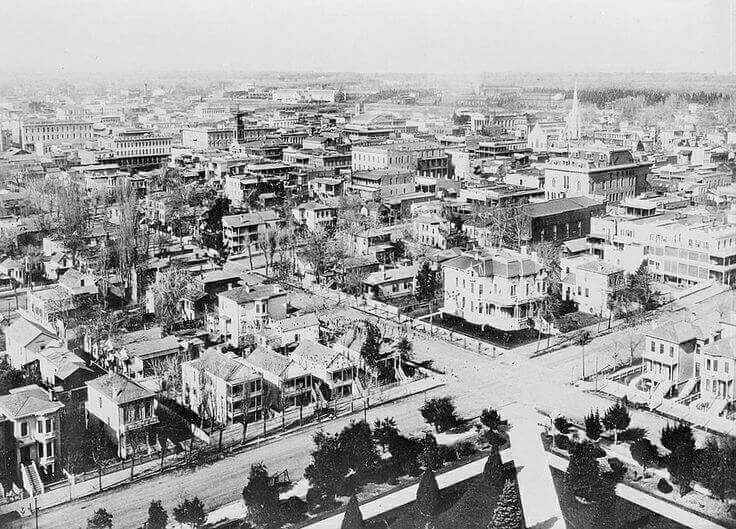 Although prices soared to unbelievable heights, Sutter’s merchandising enterprises did not prosper, because his workers left him to look for gold, his stock was stolen, and squatters settled on his land. To save some part of his holdings, he deeded a parcel along the Sacramento River to his son, who had a townsite plotted. The town that sprang up was called Sacramento, after the river which ran beside it, and it quickly became a supply and recreational center for miners.

The town was ravaged by flood in 1849, but the following year it had a population of 6,820, and was incorporated. In the next few years, fire, floods, and cholera swept the community, but the town aspired to being the state capitol, and in 1854 it was so designated.

In 1857, the Sacramento Library Association was founded.

Among its sponsors were four young men who made railroad history in the next few years—Collis P. Huntington, Leland Stanford, Charles Crocker, and Mark Hopkins.

In 1860, when the Pony Express was inaugurated, Sacramento became its western terminus. Three years later it was incorporated as a city. In 1863, the Central Pacific Railroad began laying tracks east from Sacramento to meet the Union Pacific, giving the nation its first transcontinental rail route in 1869.

By the time the great gold rush had ended, the main supports of the city’s presentday economy had been laid, and the search for quick riches gave way to the development of agriculture in the area. Steadily the modern city took shape. Dams were built on the American and Sacramento rivers to produce electricity for the area and to control dıe floods that had tormented the city.

After World War II, at the instigation of the local businessmen, more diverse industry came into the city. A 10 year plan (1951-1961) was drawn up by the Citizens Redevelopment Advisory Committee. Under the plan, the committee helped to replace rundown areas with lowincome housing, parks, and boulevards.