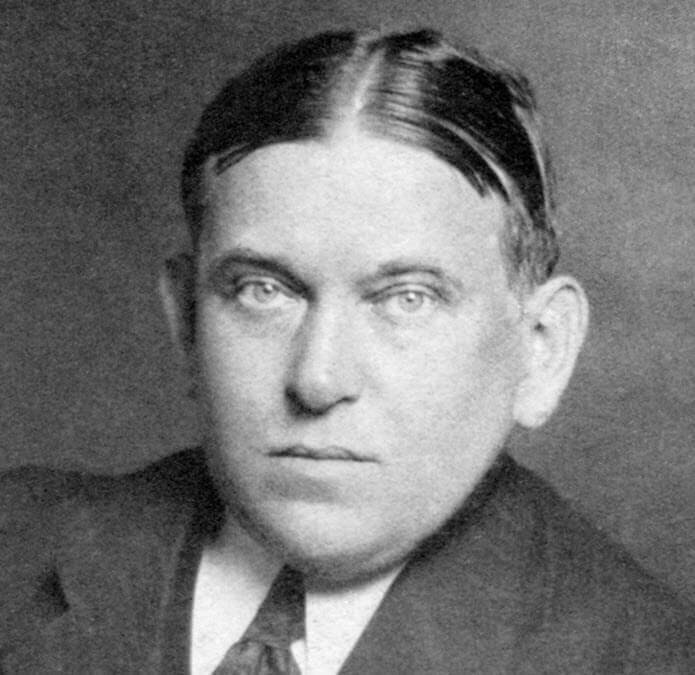 Henry Louis Mencken; American editor and satirist: b. Baltimore, Md., Sept. 12, 1880; d. there, Jan. 29, 1956. He received his formal education at the F. Knapp Institute and the Baltimore Polytechnic Institute. In 1899 he joined the Baltimore Morning Herald as a reporter. He became its editor in 1905, and in that year joined the Baltimore Evening Sun, for which he worked intermittently as editorial writer, columnist, and reporter until 1948. His first literary efforts were in the field of poetry and the short story, but, after discovering George Bernard Shaw and Friedrich Nietzsche, he abandoned creative writing for ideological warfare. Joining the magazine, Smart Set, in 1908, Mencken launehed his campaign against prevailing values in American life and letters. In 1914 he and George Jean Nathan became coeditors of the magazine, and in 1924 they undertook the joint editorship of Alfred Knopf’s new magazine of opinion, the American Mereury, which Mencken continued to edit until 1933.

Based on a union of scientific skepticism and Nietzschean ethics, Mencken’s social criticism was direeted primarily against the middle elass, which he called the “booboisie.” His antipathy for “Puritanism” and democracy led him to denounce the “genteel tradition” in American literature and to take up with ardor the cause of naturalism. With his mastery of the techniques of invective and shock, he became the apostle of ideological rebellion in the post-World War I years. His essays, particularly the Prejudices (six series, 1917-1927), which diagnosed with clinical precision the current social ills, acquired the status of seripture among young intellectuals. During the depression, however, he rapidly lost his following, and by 1930 his influence had become negligible. Perhaps his most important contribution to American literature was his clıampionship of new writers, ineluding Theodore Dreiser, James Branch Cabell, Sherwood Anderson, Sinclair Lewis, and Eugene O’Neill. And perhaps his most permanent work is the American Language (four revisions and two supplements, 1919-1948).