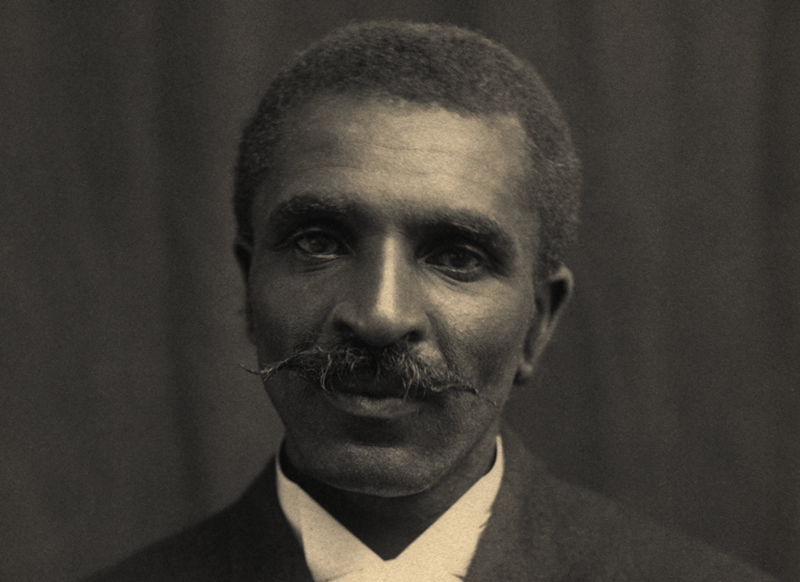 George Washington Carver (1864-1943), American botanist, chemurgist, and educator who made significant contributions through his research in agriculture. lie developed more than 300 by-products from the peanut and sweet potato, including plastics, dyes, medicines, flour, powdered milk, wood stains, and fertilizer. His extensive experiments in soil building and plant diseases helped revolutionize the economy of the South.

Carver was born near Diamond Grove, Mo., the son of Negro slaves. Although the exact date of his birth is not known, it has been deduced that he was born on or about July 12, 1861. While Carver was still an infant, his father was killed, and his mother, along with George and another child, was kidnapped from her master, Moses Carver. Moses Carver bought back the sickly infant George for a horse valued at $300. George remained with the Carvers, whose surname he took, for some years after the Emancipation Proclamation was signed.

Even as a youth he had a keen and inquiring mind and an instinctive knowledge of plants. He left his home with the Carvers when he was 10 to enroll in a one-room school at Neosho, Mo. By hard work and the help of benefactors, Carver was able to continue his education. In 1885 he finished high school in Minneapolis, Kans., but although his credentials were accepted by Highland University, he was refused admittance because of his race. In 1890 he enrolled at Simpson College, at Indianola, Iowa. Despite his talent and interest in painting, Carver’s art teacher encouraged him, because of his skill with plants, to enroll the next year at the State Agricultural College in Ames, where he earned his bachelor’s degree in 1894. He was then employed at the Ames Experiment Station as assistant to Louis Pammell, a noted botanist and mycologist. After receiving his master’s degree at Ames in 1896, he accepted Booker T. Washington’s invitation to head the newly organized department of agriculture at Tuskegee Institute in Alabama.

Carver found the land in Alabama exhausted by single-crop cotton cultivation, eroded for lack of plant cover, and parched by the sun. He found ways of restoring the mineral content of the soil by planting nitrogen-producing legumes, and he discovered that peanuts and sweet potatoes would yield especially productive crops in the Alabama soil. He then taught farmers crop diversification. When many heeded his advice but found no ready markets for their new products, Carver began experiments that resulted in more than 300 by-products of the peanut and sweet potato. His demonstrations of the commercial possibilities of these products virtually changed the economy of the south.

Just as spectacular was Carver’s work with hybrids and various types of fertilizer. On the experimental farm at Tuskegee he evolved a cross between short-stalk and tall-stalk cotton, known as Carver’s hybrid, and several other strains. He also grew enormous vegetables. Carver and Henry Ford collaborated on many matters, and together they perfected a process for extracting rubber from the milk of the goldenrod.

Carver instituted a visiting day for small farmers to come to Tuskegee to learn about soil fertilization. For those who were unable to travel to the Campus, Carver began a “school on wheels,” going into the communities to give demonstrations. His movable school idea was soon adopted by the U. S. Department of Agriculture and in many foreign countries.

The results of Carver’s research and the products of his laboratory became known throughout the world. As a consequence, many persons, including Thomas Edison, offered him employment at high salaries, but he would not leave Tuskegee. Moreover, he would not accept a raise in salary above the meager $1,500 a year that Booker T. Washington offered him when he first came to Tuskegee.

Carver’s first publication from Tuskegee, a pamphlet called “Feeding Acorns to Livestock” (1898), was followed by 43 other publications. Among the honors he received were election to fellowship in the British Royal Society of Arts in 1916 and awards of the Spingarn Medal in 1923, the Roosevelt Medal in 1939, and the Thomas A. Edison Foundation Award in 1942.

In 1940 the Carver Research Foundation was established at Tuskegee Institute. Carver contributed most of his savings to the foundation. Following his death on Jan. 5, 1943, in Tuskegee, Ala., his entire estate was added to the foundation’s endowment. The Carver Museum at Tiwkegee, which houses many exhibits of Carver’s work, was dedicated in 1941. The George Washington Carver National Monument is at the site of the Moses Carver farm. Congress has designated January 5 as a day to honor Carver each year.