How do snow crystals form and grow? What are the types of snow crystals? Information on snow and importance of snow fall studies.

SNOW is the precipitation of ice in the form of flakes, or clusters, of ice crystals. Snow is a good thermal insulator, conserving the heat of the earth and protecting vegetation from severe winter cold even in subarctic areas. On the other hand, accumulations of snow produce transportation problems, the threat of floods during spring runoffs, and, in mountainous areas, the danger of snowslides.

The term “snow” is used in daily life for both falling snow and the snow deposited on the ground. However, the structure is different in these two cases. Falling snow consists of crystalline or semicrystalhne ice. Because ice crystallizes in the hexagonal system, the crystals are commonly six-sided, and under magnification they are seen to be of beautiful and infinite variety. After reaching the ground, the snow loses its crystalline shape and becomes granular in form, even when not compacted and when the temperature is below freezing. Thus it is better to consider falling snow and ground snow as separate subjects.

A snow crystal is a crystal of ice formed in the atmosphere at a freezing temperature, by condensation of water vapor on a condensation nucleus—a very tiny ice crystal or dust particle. The condensation takes place directly from water vapor to ice without passing through the liquid state, a process known as sublimation. That is, water droplets can exist in a supercooled state at temperatures as low as -40° F ( -40° C). When such droplets are in the neighborhood of tiny ice crystals or other condensation nuclei in a cloud, they evaporate and then freeze directly onto the nuclei. The growth of the crystal takes place in conformity with the hexagonal structure of ice. If an excess of moisture is present in the atmosphere, the tiny crystals develop into snow crystals.

Ordinary snow crystals are transparent, like glass, and vary in size from 0.02 to 0.5 inch (0.05 to 1.3 cm) in diameter. Although they are small, they can be examined by collecting them carefully on a black cloth if the temperature of the air is at or below freezing.

In northern countries or high mountain districts, snow crystals often fall to the ground as individual units, but in warmer regions they stick together as they fall to earth. The group thus produced is called a snowflake. Snowflakes are sometimes very large. Those of more than one inch (about two and a half centimeters) in diameter are not rare, the number of component crystals reaching a few thousand.

The final form of the crystals depends on how fast they fall through the air and on the temperature, humidity, and electrical conditions that they encounter. If the crystals spin about vertical axes as they fall, their growth may be quite uniform, resulting in beautiful hexagonal plates and branched forms with almost perfect symmetry. They may also take the form of columns or needles, or they may have an irregular shape. For example, the “soft” granular snow called graupel is produced when snow crystals accumulate a layer of rime.

If snow crystals enter a layer of atmosphere above the earth that is at an above-freezing temperature, the snow melts and falls to earth as rain. At least half of the rainfalls that occur are thought to be due to the melting of snowflakes. However, if air temperatures near the earth are sufficiently low, the snow crystals reach the ground unmelted. 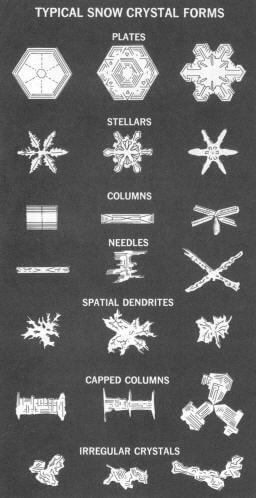 Snow crystals cannot maintain their original elaborate outline and delicate structure when they are confined in the mass of snow deposited on the ground. Pressure and warmth cause them to change. In general, when a crystal has a tendency to evaporate, molecules transfer themselves from the projecting parts and condense to indented parts. Thus, since ice has a relatively high vapor pressure, the fine structure and delicate design in an ice crystal is gradually lost by the process of evaporation and condensation.

The crystal is transformed into a more rounded form, even if it is kept below freezing all the time. A temperature gradient usually exists in the snow cover, the upper layer being colder and the layer near the ground wanner. This temperature gradient causes acceleration in the process of rounding of a snow particle. Thawing and refreezing also exert the same influence. Consequently the ground snow, excepting newly fallen snow, becomes an assemblage of ice granules.

The amount of snow that has fallen may be expressed in terms of its average depth, or in terms of the depth of the water that would result if the snow melted. Snow density may vary considerably, depending on the structure of the flakes, but it is customary to consider the ratio of the depth of freshly fallen snow to equivalent water depth as 10 to 1—that is, 10 unit depths of snow produces 1 unit depth of water. As the snow melts and refreezes, its density increases; a density of about 0.25 is considered best for skiing. Snow that remains over the summer period is known as firn.

In 1635, the French philosopher René Descartes made observations on snow crystals and published his sketches in Amsterdam. These are thought to be the first scientific records of snow crystals, including almost all the important types known at present. The English scientist Robert Hooke showed a number of sketches of snow and frost crystals in his Micrographia, while the first detailed descriptions of columnar or pyramidal snow crystals was made by William Scoresby, an English whaler, in 1820. In 1822, Toshitsura Oinokami Doi, a Japanese feudal lord, published Sekka Zusetsu (Illustration of Snow Blossoms), in which 86 sketches of snow crystals are reproduced. These sketches are very nearly equal in quality to the drawings of snow crystals published by an English meteorologist, James Glai-sher, in 1855. The latter are considered to be the most accurate drawings published before the development of photomicrography.

At the end of the 19th century, many meteorologists in Europe began to take photomicrographs of snow crystals. Among them, Richard Gustav Neuhauss of Berlin, Adolf Erik Nordenskiold of Stockholm, and A. A. Sigson of Russia were noteworthy. The pioneer in this work, however, was Wilson Alwyn Bentley of Jericho, Vt., who began photographing snow crystals in 1885. A whole life devoted to this work meant the accumulation of at least 6,000 photographs before his death. Approximately 3,000 of them were published in 1931 in Snow Crystals, by Bentley and William Jackson Humphreys. This book is world famous for its unprecedentedly large collection of photographs as well as for the beauty of those pictures. Another scholar who made an extensive study of snow crystals was a Polish scientist, Antoni Dobrowolski, whose work appeared in 1922.

In 1932 a Japanese meteorologist, Ukichiro Nakaya, and his colleagues in Hokkaido University began a study of snow. They took about 2,500 photomicrographs and made a general classification of snow crystals, and in following years they made measurements of the mass, speed of fall, electrical nature, and frequency of occurrence of each type of crystal.

Along with the study on natural snow, Nakaya and his colleagues found a method of producing snow crystals artificially in a cold chamber, and by 1946 they succeeded in producing every type of snow crystal in the laboratory. The variety in shape was found to be due to the temperature and the degree of excess humidity in the atmosphere. As a result of this finding, estimation of the upper-air conditions during a snowfall becomes possible by examination of the shapes of snow crystals on the ground. The results of their 20-year work were published, with 1,550 pictures, in 1954.

Knowledge of the physics and engineering of snow is important, in view of the fact that snow is one of the world’s most common substances and that practical problems resulting from its widespread occurrence are manifold. Included are removal of compacted snow from roads and airfields, travel over the surface of the snow by men and vehicles, avalanche control, prevention of sleet formation on transmission lines, the breaking of tree limbs and of smaller trees in the forest, and many other practical aspects of daily life. However, snow also serves useful purposes, besides being a good thermal insulator for vegetation.

For example, in much of the semiarid land in the western United States, residents are chiefly dependent for their water supply on the snow deposited during winter in the high mountain districts. To forecast the spring runoff, the amount of snow deposited in a basin is measured by boring the whole thickness of snow cover and weighing the mass at several spots in the basin. In the past much damage has often resulted from great oods caused by the sudden melting of snow over a large area, but today the spring thaw water is kept back in large reservoirs behind great dams and is used for irrigation and city water throughout the year. The mountain snow is thus used for the conquest of the desert.