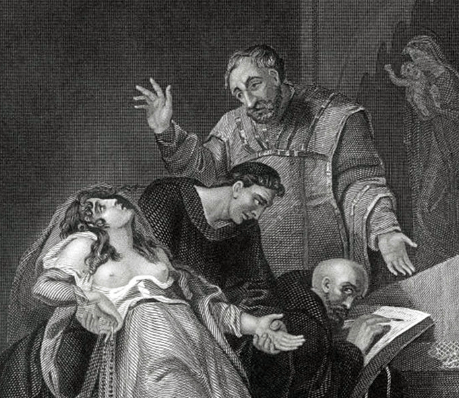 Elizabeth Barton; (c. 1506-1534), Englishwoman, who figured in a political and religious controversy during the reign of Henry VIII. She was born at Aldington, Kent, and became a servant in Canterbury. Prone to hysterical, perhaps epileptic, seizures during which she uttered religious revelations and prophecies, she became famous when some of these came true. The “Maid of Kent,” as she came to be called, attracted the attention of William Warham, archbishop of Canterbury, and he ordered an investigation of the case. Meanwhile, Henry VIII delegated Thomas More to make inquiries. More found her utterances nothing but “what a right simple woman might speak of her own wit.”

Edward Bocking, Canterbury’s investigator, apparently exploited her for his own political ends. She became a nun at his suggestion, and it is believed that he prompted her political prophecies. She admonished Henry VIII that if he married Anne Boleyn, he would die within six months; following his marriage she warned him that he would be disavowed by his subjects. Henry considered this warning treason, and he had Elizabeth arrested and examined before the Star Chamber. The chamber produced a confession that she had feigned the trances. She was condemned, without benefit of trial, and was hanged at Tyburn, on April 21, 1534. Bocking and four others also were executed.

The validity of documents attesting to her confession has been questioned. Without any trial records to examine, it is impossible to judge whether she was a conspirator, a saint, or a woman with a mental illness. Some authorities believe she was a simple, deluded, and much exploited victim of political intrigue.