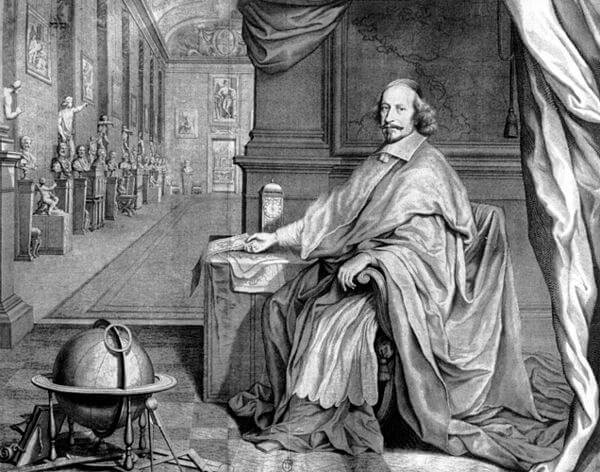 A protégé of the Colonna family, he was given a solid education under the Jesuits, distinguished himself on diplomatic missions for Pope Urban VIII, and became papal nuncio to Paris (1634-1636). Having gained the favor of Cardinal Richelieu, he acquired French citizenship and entered the service of France. Though he never took more than minor orders, his abilities were such that he was made a cardinal (1641) upon presentation by Louis XIII as a preliminary step to succeeding the ailing Richelieu.

The passing of Richelieu (1642) and then of Louis XIII (1643) threatened the entire structure of absolute monarchy in France. Mazarin’s position as minister to Anne of Austria, queen regent on behalf of five-year-old Louis XIV, was essentially weak. All those whose ambitions Richelieu had mercilessly crushed—the nobility, the higher courts (Parlements)—came back to haunt his appointed heir. The bourgeoisie itself, normally the crown’s stanchest ally, smarted under the burden of taxation. Final success in the war with the houses of Austria and Spain hung in the balance.

Any appraisal of Mazarin’s statesmanship must take these considerations into account. His authority derived, not from personal prestige, but from his shadowy status as confidant, lover, perhaps even (since he was not bound by priestly vows) morganatic husband to Queen Anne. Intrigue and deceit were his favorite tools, but he used them from necessity as much as from character. He lacked the stamina of his predecessor ; yet he constituted himself the faithful executor of Richelieu’s political testament.

The first phase of Mazarin’s regime saw the triumphant conclusion of the Austrian war. The victories of the young prince de Condé (Louis II) and the vicomte de Turenne paved the way for the Treaties of Westphalia (1648), which recognized French sovereignty over most of Alsace. Other concessions to France’s allies— Sweden and the German princes—foreshadowed the formation (1658) of a League of the Rhine as a bulwark against the Austrian emperor’s ambitions.

Meanwhile the threatened Fronde  or revolt of the malcontents broke out and hampered the prosecution of the war with Spain. Mazarin forthwith removed himself and the court to St.-Germain-en-Laye, the better to exploit divisions among the rebels. Further political expediency drove him to exile near Cologne (1651). From afar he urged the queen to rally around her son, by then of legal age, all partisans of order and unity. His plan was immeasurably advanced by the collusion of Condé, protagonist of the Fronde of the Princes, with the Spanish enemy. This treasonable act allowed Louis XIV to re-enter Paris to the acclaim of his subjects. Mazarin returned in his wake (1653) ; Condé was eventually subdued and forgiven, and the “royal party” envisioned by Mazarin emerged unchallenged from ruin and misery.

Turning his attention back to the Spanish war, Mazarin more than compensated for the loss of Holland as an ally by gaining an alliance with Oliver Cromwell. Threats of invasion both at home and in their northern possessions compelled the Spaniards to sue for peace. At the Treaty of the Pyrenees (1659), France acquired Roussillon and Artois as well as parts of Flanders, Hainaut, and Luxembourg. Not content with this splendid result, Mazarin complicated the succession to the throne of Spain by bringing about the marriage of Louis XIV with the Infanta Maria Theresa.

The cardinal at his death bequeathed to his sovereign the most powerful kingdom on the Continent. He had saved and strengthened the state by thwarting all enemies from within and without, and had trained a phalanx of public servants (Jean Baptiste Colbert among them), subsidized the arts, and preserved or created the instrumentalities of absolute monarchy. Through the Palais Mazarin and the Bibliothèque Mazarine, even his huge fortune and collections, amassed by devious means, in part at least reverted to the nation. Indeed, Louis XIV’s decision to be his own prime minister thereafter was no repudiation of the past but a reaping of what Richelieu and Mazarin had sown.