Thomas Edison; (1847-1931), American inventor and pioneer industrialist. Rough-hewn and self-educated, Edison rose to become a folk hero in his day and one of the most prolific inventors of all time. During his lifetime more than a thousand American patents were granted on work of his own or of teams under his supervision. Three of his inventions—the phonograph, a practical incandescent light and electric system, and a moving picture camera—helped found giant industries that were to change the life and leisure of the world. Besides being an inventor, Edison was a manufacturer, a businessman, and a founder of organized research as well as one of the most colorful and paradoxical personalities of the late 19th and early 20th centuries. 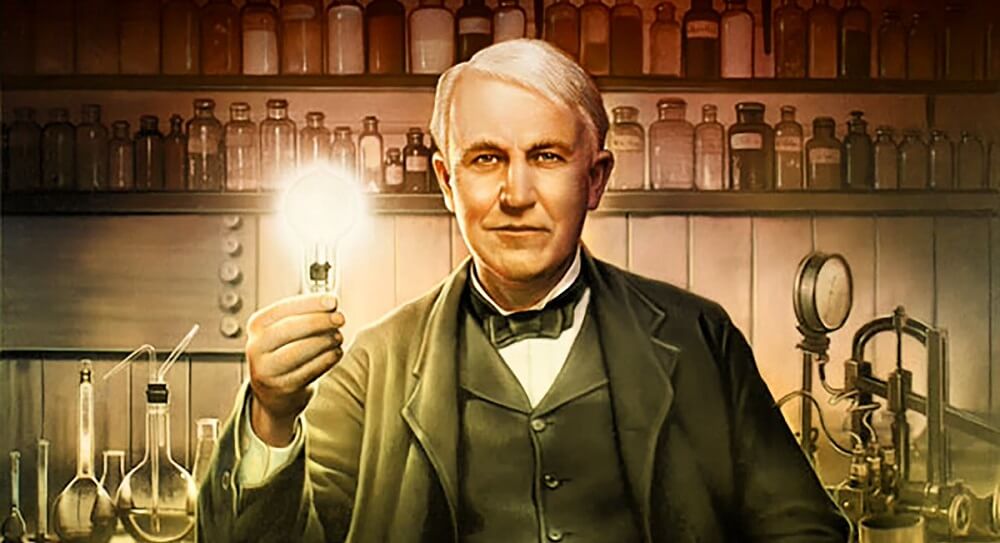 Edison was married twice. In 1871 he married Mary G. Stilwell, and two years after her death in 1884 he married Mina Miller. He had three children by each of his wives.

Edison was born in Milan, Ohio, on Feb. 11, 1847. He was the seventh and last child of Samuel and Nancy (Elliott) Edison. His ancestry was Dutch-English on his father’s side and Scotch-Yankee on his mother’s. When Edison was born, his father was a prosperous shingle manufacturer in Milan, Ohio. When he was 7 years old, however, a collapse of the family fortunes forced Samuel Edison to move his family to Port Huron, Mich., where they were to live in adequate but poorer circumstances.

During childhood Edison learned eagerly by asking questions and discovering things for himself. Unable to adapt himself to the routine of school, however, he quit three months after beginning when his teacher called him “addled.” His mother, a former teacher, then continued his education at home. When he was 9 years old, she gave him a primer on physics that described scientific experiments he could perform himself. He read this avidly but challenged every statement in it until he had tested it personally. The next year he set up a chemical laboratory in his cellar.

Needing more money for chemicals and apparatus, Edison got a job as a newspaper and candy salesman on the Grand Trunk Railway when he was 12 years old. To avoid wasting time he moved his cellar laboratory to the baggage car and read in the public library during layovers in Detroit. When he was 15, he bought a printing press and edited and printed a small local newspaper, the Weeklij Herald, in the same baggage car.

One morning when young Edison was trying to climb onto a moving train, a trainman helped him aboard by grasping his ears. He later attributed to this incident the beginning of the deafness that was to increase through his life—an affliction that cut off many personal associations but undoubtedly helped him concentrate on his work. A history of the symptoms, however, indicates that his deafness was probably largely an aftereffect of an earlier attack of scarlet fever.

In 1863, at the age of 16, Edison learned telegraphy, and for the next four years he roamed the Middle West as an operator. It was during these years that he . first dreamed of becoming an inventor. This ambition was fired to action in 1868 when, employed by the Western Union Telegraph Company in Boston, he read Experimental Researches in Electricity by Michael Faraday—a great experimenter whose background seemed similar to his own.

Edison filed papers for his first invention, an electric vote recorder, in October 1868 and received a patent on June 1, 1869. Finding no buyer, he formed the policy he was to follow the rest of his life: he would never attempt to invent anything unless he was sure there was a commercial demand for it. His first patent under this new rule was for improvements on a stock ticker. Although he sold this, he did not receive enough money to pay the expenses he had incurred.

Hoping to change his fortune, he went to New York in 1869. Arriving penniless, he visited Laws’ Gold Indicator Company, where friends invited him to study the instruments and to sleep in the battery room. The indicator, invented by S. S. Laws, was an electric device that transmitted changes in gold prices to subscribers. Edison’s big chance came one day when the central transmitter broke down. Quickly spotting the trouble, he had the device running within two hours. Laws gave him a job and soon made him manager at the then high salary of $300 a month. Edison lost this position through a merger, but his fortune was to soar again. Late in 1870 he received $40,000 from the head of the combined company for improvements he made on the stock ticker.

With this sudden wealth Edison equipped a shop in Newark, N.J., and began manufacturing tickers. By now his reputation as a “young wonder,” able to rectify defects in the devices of others, had spread. Promoters brought him their problems. One was an automatic telegraph invented by G. D. Little, good in principle but sometimes sluggish and indistinct in operation. Backed by another $40,000, Edison put the telegraph in good working order and opened a shop to manufacture the machine. In 1873 he devised a “dipiex” telegraph with which two messages could be sent simultaneously over one wire in the same direction. It was a variation of the “duplex” of J. B. Stearns, with which messages could be sent simultaneously in opposite directions. In 1874 he combined the dipiex with the duplex to make a “quadruplex,” which was able to carry four simultaneous messages over one wire.

Bored with manufacturing and no longer able to handle alone the ideas that filled his mind, Edison moved in 1876 to Menlo Park, N.J., where he established the world’s first “invention factory” —a well-equipped and ably staffed laboratory dedicated solely to testing, improving, and inventing useful products for pay. Forerunner of the modern industrial research laboratory, this unique institution was itself one of Edison’s greatest inventions and was to play a leading part in his subsequent achievements. The first important product to come from Edison’s invention factory was the carbon telephone transmitter (1877-1878), a device that extended greatly the clarity and range of Bell’s original system.

The second product of the Menlo Park laboratory was the phonograph (1877), Edison’s favorite invention and considered to be his only completely original one. The idea for it came to him while he was trying to improve a telegraph repeater. In this device a paraffin-coated paper tape was drawn at high speed through a receiving instrument where a stylus or needle embossed it with the dots and dashes of an incoming message. The embossed tape was then fed into a transmitting instrument, where another stylus followed the indentations and so repeated the message.

Once, when racing through a repeater, a tape gave off a noise that sounded to Edison like “a light, musical, rhythmical sound, resembling human talk heard indistinctly.” This set him thinking. What would happen if he connected a telephone diaphragm to the embossing needle in place of the telegraph arm? Could he thus impress on the tape the subtler vibrations of the human voice and so produce recording that could talk back intelligibly?

His first attempts were made with a simple adaptation of the telegraph repeater. Then he tried devices using grooved cylinders of wax and chalk, and finally of metal covered with tinfoil, instead of the tape. Into an improved machine using tinfoil, and before a small group of witnesses, he recited Mary Had a Little Lamb. When a stylus was run over the indented foil, all were dumbfounded to recognize Edison’s high-pitched voice almost perfectly reproduced. Although the subsequent early phonographs were harsh-sounding and crude, throngs came to hear them, and the popular press began hailing Edison as a “magician” and “wizard.”

In 1878, Edison began the enterprise for which he is best known— the commercial introduction of the incandescent lamp. He did not invent this lamp, but he did devise and manufacture the first lamp and electrical distributing system that could be operated economically together—a feat more important than the invention of the lamp itself in promoting the general use of electricity.

Unlike previous investigators in the field of electric lighting, Edison envisioned not merely a lamp but a complete lighting system that could compete with the popular gaslight of the day. The key to such a system, he believed, was a lamp having a high-resistance, hairlike “filament,” instead of the low-resistance wires and rods used by rival inventors. In October 1879, after thousands of experiments, he made such a lamp, using carbonized thread that burned for 40 hours. The next year he made lamps suitable for commercial use with filaments of bamboo. With the help of Francis R. Upton, the mathematician in his employ, Edison also devised dynamos, the feeder-and-main system, and later a three-wire system— each of which cut the cost of supplying electricity.

On Sept. 4, 1882, Edison opened his first commercial central station on Pearl Street, New York City, with about 85 customers and some 400 lamps wired in the circuits. Modest in size but revolutionary in idea, this station marked the beginning of the electric lighting industry in America.

Although this and other Edison stations built during the next dozen years demonstrated conclusively that the distribution and sale of electricity from central stations were commercially possible, the dependence of these stations on low-voltage direct current severely limited their range and size. An alternating-current power and lighting system patented in 1888 by his onetime employee Nikola Tesla and promoted by George Westinghouse broke these limitations, but Edison obstinately opposed its use. Alternating current, he maintained, was not only dangerous but commercially impractical, and he would never permit its use in any company that bore his name. Ironically, it was the final adoption of this a-c system—against Edison’s will— that was to establish Edison’s fame by making his dream of universal light and power come true.

Besides devising lamps and equipment for his lighting system, Edison organized numerous companies to manufacture them. In 1889 these companies, together with the patent-holding Edison Electric Light Company and the Sprague Electric Railway and Motor Company, were joined to form the Edison General Electric Company. In 1892 this firm joined with its biggest rival, the Thomson-Houston Electric Company, to create the General Electric Company. Apart from inventing, Edison thus helped found what became one of the world’s largest industrial manufacturing concerns.

In March 1883, while experimenting with his lamp, Edison made his only discovery in pure science. He had inserted a vertical wire in the space between the legs of the horseshoe-shaped filament lamp. When this wire was connected to the positive side of the circuit, a current flowed between it and the filament; when connected to the negative side, none flowed. Seeing no practical use for the phenomenon, he put it aside. Later called the “Edison effect,” it was explained in 1897 by the British physicist J. J. Thomson as due to an emission of electrons, and in 1904 it was adapted by J. A. Fleming to produce the first vacuum valve to detect radio waves.

In 1887, Edison moved from Menio Park to West Orange, N.J., where he built a larger and more modern laboratory for collective invention. From this, among other things, came improved phonographs and records; dictating machines; a fluoroscope; a moving-picture camera and a peep-show device, the Kinetoscope, for viewing its pictures; the iron-alkaline storage battery; magnetic methods for separating low-grade iron ore; and methods for manufacturing chemicals and cement. Edison spent his later years trying to obtain rubber economically from domestic plants. He died in West Orange on Oct. 18, 1931.

Edison was awarded a special Congressional gold medal in 1928 for his many contributions to the nation’s welfare. In 1929, Henry Ford restored his Menlo Park laboratory at Greenfield Village, Dearborn, Mich., and in 1962 his West Orange laboratory and his nearby home, Glenmont, were dedicated jointly as the Edison National Historic Site. Both are open to the public. In 1960, Edison was elected to the Hall of Fame for Great Americans at New York University.