What kind of animal is a jaguar? Information about the jaguar’s characteristics, diet, life cycle, habitat and behavior patterns. 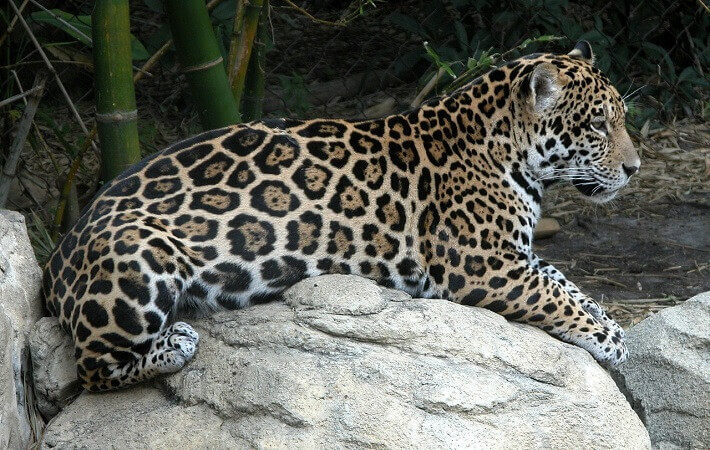 Jaguar; the largest cat of the New World, distinguished by its grayish or tawny coat characteristically spotted with black. It ranges from Texas, New Mexico, and Arizona southward through Mexico and Central and South America as far as northern Argentina, where the pampas begin. The scientific name of the jaguar is Felis onca. In Latin America it is commonly called tigre. The name “jaguar” is derived from the Indian yaguar or yaguareté.

A fully developed male may attain a combined head and body length of 6 feet (180 cm) and a tail length of 2% feet (75 cm) and weigh up to 400 pounds (180 kg). As compared with the puma, which nearly equals it in size, the jaguar is robuster and more heavily built, especially around the forequarters, and its head is proportionately larger. The ground color of the body, ranging from grayish to tawny, is marked with a pattern of spots and irregular stripes. The spots of the head and fore and hind limbs are solid and arranged individually; those of the body are grouped to form rosettes, each enclosing a dark patch that may be dotted with one or two small spots. The chest and throat are whitish and marked with irregularly traced transverse stripes, the belly is blotched, and the tail is banded with broad stripes terminally and with blotches toward the base. The ears are white on the inner side; on the outer, black with a whitish or yellow spot. 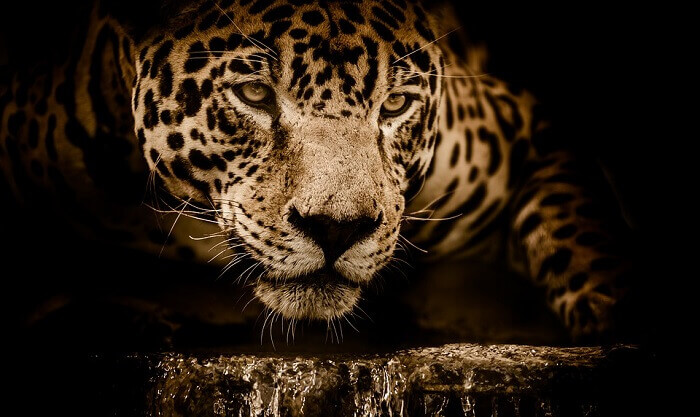 The jaguar is the largest, most powerful, and most feared carnivorous animal of Latin America. Except for man, it has no enemies, and before the introduction of firearms even man did not always command the respect of the cat. Nevertheless, jaguars rarely attack man unprovoked and almost never become man-eaters, as do individual lions, tigers, and leopards.

The abundance of peccaries and capybaras— and the ease with which these animals can be killed—keeps the jaguar well fed during most of its natural life. Deer, tapirs, and crocodiles are also preferred prey, but any animal regardless of size may be eaten by a hungry tigre. Older jaguars, no longer agile enough to make easy kills of elusive wild game, may attack domestic stock, especially pigs.

The jaguar is nearly as strong as the lion or tiger and can drag a horse or a cow over rough terrain for great distances to a secluded place where the victim can be devoured without disturbance. It takes readily to water and swims easily, even with a tapir or cow clasped between its jaws. It fishes by reclining along the edge of a stream or lake, swiftly striking and hooking with its claws any passing fish or turtle. It has been claimed that the jaguar taps the surface of the water with its tail to lure fish within striking distance. 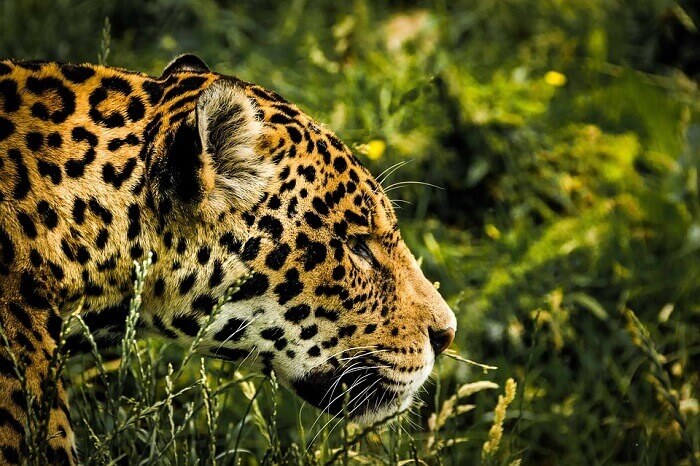 Jaguars are generally nocturnal but may be active during the day, especially during the breeding period. They climb well, but older or heavier ones remain on the ground unless treed by dogs trained especially for hunting them. They breed once a year, but evidently during no particular season. The period of gestation varies from 13 to 15 weeks, the longer time being taken by females in captivity. Two to four cubs are produced at a birth. They are generally weaned and set adrift at an early age. Adult stature is acquired at 3 years of age. Individual jaguars may live for 20 years.