Lope de Vega; (1562-1635), Spanish dramatist and poet, who was Spain’s greatest playwright and the creator of its national theater. Up to his time, the Spanish theater had consisted of classical drama strongly influenced by the Boman tradition and of simple, formless, popular plays similar to those of the Italian commedia dell’ arte. Lope rejected the classic genre, which was aimed primarily at aristocratic audiences. Using as his basis the lively popular drama, he created a distinctive three-act play form known as the comedia, a word meaning “play,” whether it be comedy, tragedy, or tragicomedy.

Directed at mass audiences rather than limited to the nobility, his comedias captured the essential spirit of Spanish tradition, customs, and attitudes in a manner so skillful that his audiences instantly took him to their hearts and constantly clamored for more. Lope complied, writing, according to his own estimate, some 1,500 plays, of which about 500 are extant. Nevertheless these, together with his poetry and other writings, make him probably the most prolific author in the history of Western literature. Cervantes called Lope a monstruo de la naturaleza, that is, a prodigy of nature. Lope’s genius made itself felt in Spanish drama for more than 150 years, and Lope influenced countless playwrights who followed him. 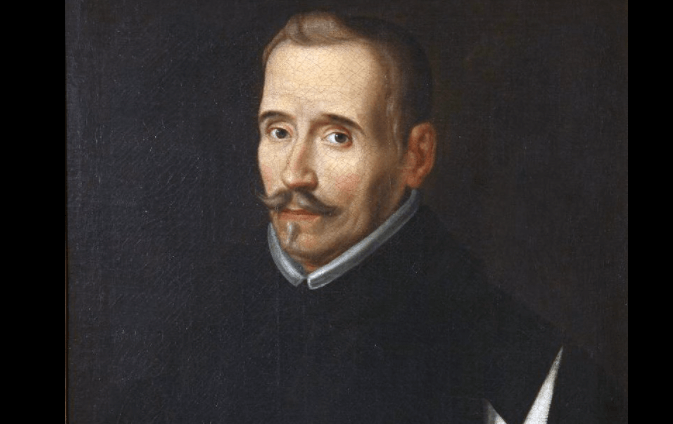 Lope Félix de Vega Carpió was born in Madrid on Nov. 25, 1562. A precocious youngster, he is reported to have been composing verse at the age of five and writing plays when he was ten. Lope was educated first at a Jesuit college and then at the University of Alcalá. Volatile, impulsive, and passionate, he was involved in numerous affairs from adolescence and fell in and out of love throughout most of his life. In 1588 he was exiled from Madrid for eight years, for libeling the parents of his first great love, Elena Osorio. In that year, also, he married Isabel de Urbina and promptly left her to join the Armada against England. Isabel died in 1595, and three years later Lope married Juana de Guardo. During his 15-year marriage to her he continued to have numerous liaisons. Juana died in 1613, and Lope, out of grief and perhaps guilt, took holy orders the following year. In a short time, however, he was once again involved in amorous intrigues, most notably with Marta de Nevares Santoyo, his last great love, who ultimately became blind and mad. She died in 1632.

Possessed of almost superhuman energy and drive, Lope was able to pursue his highly involved personal affairs and at the same time enjoy one of the most successful careers in literary history. Among his earliest writings were poems. He started to write plays around 1587. Following his return home from the Armada expedition, he lived and worked in Valencia, a city in which theater thrived. In 1595, Lope went back to Castile, taking the post of secretary to the duke of Alba in Toledo. In later years he held similar positions with the marquis of Malpica and the count of Lemos, both in Madrid, where, his exile over, Lope settled permanently in 1596. His longest period of service was with the duke of Sessa, who was his patron from 1605 until Lope’s death.

Lope devoted himself to playwriting from the 1590’s and established his reputation in a very short time. He was so admired and beloved by his public that his name became synonymous with perfection—”It’s Lope’s” became a synonym for “It’s superb.” His portrait hung in every home. Many honors were heaped upon him, among them membership in the Order of Saint John of Jerusalem, conferred by Pope Urban VIII in 1627.

Lope died in Madrid on Aug. 27, 1635. His funeral, which is reported to have lasted for nine days, was a national affair.

Lope’s plays followed a certain format and plan, which he outlined in a treatise written in verse, El nuevo arte de hacer comedias (The New Art of Writing Plays), published in 1609. In this work, addressed to the Academy of Madrid, he explains that he is aware of the rules of classical drama but has deliberately ignored them in his effort to reach and entertaint the masses, who care nothing for “art.” The unity of time, for example, is eliminated in his work. Thus his plays, all written in verse, are organized in three acts, with each act covering about one day. He carefully planned the structure of each play so that his audience could not guess the denouement until well into the third act. This was to prevent the traditionally restless and impatient Spanish theater public from walking out prematurely.

Lope regarded the theme of honor as of greatest interest to his public. He used it over and over with infinite variations and twists—in comic and in tragic contexts—involving characters of the highest nobility as well as those of the lowest estate. Pragmatic and realistic, essentially a practicing playwright rather than a theorist of aesthetics, Lope always wrote with his audience—usually of the lowest common denominator—in mind. It is probably for this reason that he is the most popular writer that Spain has ever produced.

Lope’s plays fall into several categories. One is the capa y espada, or “cloak and sword,” drama. Essentially comedies of love and intrigue, these plays are peopled with contemporary young men and women of the upper and middle classes. The best-known works of this group include El acero de Madrid, El perro del hortelano, and La dama boba. Another dramatic genre in which Lope excelled is the historical play, of which El caballero de Olmedo, is one of the most famous. Many of his plays, such as Fuenteovejuna and El mejor alcalde, el rey, depict the struggles of the peasantry, backed by the king, against the oppression of the corrupt nobility. Lope also wrote a number of plays on religious themes and many one-act farces.

The men in Lope’s capa y espada plays are usually highbred, gentlemanly, self-possessed, courageous, extravagant in the use of lyrical compliments to women, arrogantly and defiantly proud, and slavishly bound to the dictates of pundonor, a peculiarly Spanish code of honor. The women are generally pictured as superior to the men. Beautiful, gay, energetic, patient, and heroic, they too are expected to live strictly by the honor code, and vigilant fathers and brothers try, often without success, to see that they do. However, in the vast Lopean repertory, all classes and types of men and women abound. Important staple figures are the comedians (graciosos), both male and female, who amuse by parodying the lines and actions of the principals. The graciosos were indispensable for the success of any play, comic or tragic.

Although Lope’s plays are not filled with profound observations and deep philosophical comments on human nature and existence, they faithfully reflect the mood and spirit of his times with warmth, poetry, and wit. He portrayed life as he saw it, and because one of his prime functions was to entertain, he imbued his work with zest and good humor whenever possible. A master of the language and an outstanding poet, Lope had the gift of conveying complex emotions in words and phrases comprehensible to even the simplest members of his audience.

Lope, who began his career as a poet, ranks among the greatest in Spanish literature. He excelled in lyrics but was also an accomplished writer of narrative poetry and religious verse. His love lyrics, particularly, are fresh, spontaneous, and full of exquisite imagery. A number of his sonnets are unsurpassed in the literature of Spain. Some of his most delightful and moving poetry is contained in his poetic novel La Dorotea (1632), in which, though he was at the time no longer young himself, he described and evoked the glories and miseries of passionate, romantic love with great intensity and beauty.