Information on the classification, characteristics feeding habits, anatomy, reproduction and habitats of annelids.

Annelida; is a phylum of invertebrates that contains the segmented worms. Included among these are the marine bristle worms, earthworms, and leeches. Found in areas all over the world, from the highest mountains to the greatest ocean depths, annelids are characterized by long, segmented bodies with two-sided (bilateral) symmetry.

Anatomy of the Annelids: 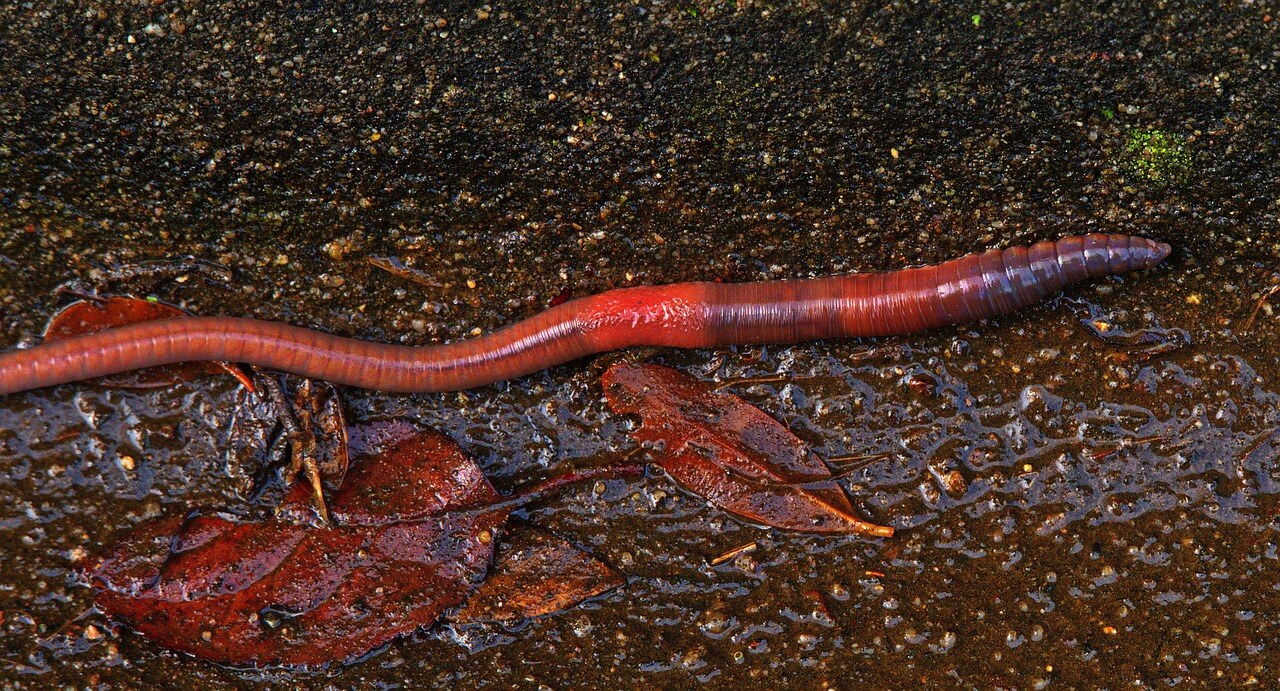 The body surface of the annelids may be concealed by spines, respiratory processes, or other structures that obscure the segmental pattern. The skin may be drab or highly colored and patterned, and it is enhanced by the color of the blood, which may be yellow, red, or green, or by chromatophores (pigment-bearing cells).

The length of the body varies from a fraction of an inch to several yards (fraction of a centimeter to several meters). The smallest annelids are found among the aquatic and marine forms; the largest are terrestrial and intertidal forms.

The alternate push and pull movements of creeping, looping, and crawling and the undulatory movements used for rapid swimming require a well-developed musculature in annelids. Their muscular system consists of an inner longitudinal layer, an oblique layer, and an outer longitudinal layer. The muscle cells are either striated or smooth. Muscles are well-developed in many atypical forms and are comparatively weak in sedentary types. The proboscis is muscular and may be turned outward to aid in the capture of food and in locomotion.

The circulatory system is either closed (blood circulates in a system of vessels) or is partly to entirely open (blood and body cavity fluids mix in a cavity called the haemocoel). One or more pulsating vessels, or hearts, may occur in the anterior segments; they propel the blood forward in the dorsal vessel and backward in the ventral longitudinal vessel. A muscular cardiac body may be fused with the dorsal vessel in many annelid forms, but its functions are related to other processes. The dorsal and ventral longitudinal vessels are connected in each segment by a series of transverse segmental vessels; there also is a system of capillaries.

The excretory system is nephridial and consists of a pair of tubular excretory organs (nephridia) located in each body segment. In some annelids the nephridia are limited to one or a few pairs in the anterior segments, or they are dispersed throughout the body. Their function is to collect wastes from the coelom (body cavity) at the ciliated inner collecting end, or nephro-stome, and transfer them to the exterior through small pores called nephridiopores.

The nervous system in annelids consists of an anterior ganglionic mass, or brain, and a ring of nerves surrounding the esophagus and connecting to the ventrally located nerve cord. This nerve ring may be single or multiple and may have ladderlike cross connections and segmental branches. In some annelids the adult brain is derived from the larval brain; in other annelids it is derived from an anterior body segment. Giant nerve fibers, or nerve centers, that permit abrupt responses to stimuli occur in some annelids.

Annelids display many kinds of reproduction, which are both asexual (vegetative) and sexual. Asexual reproduction by fragmentation is common in some annelid forms. Budding from a posterior end is highly evolved in others, and transverse fission, resulting in a chain of successively older individuals, also occurs.

The sexes are separate in most of the bristle-worms, with males and females about equal in number and size. Hermaphroditism, in which both male and female elements are present in all individuals, occurs in all the earthworms and their relatives and in some of the bristleworms; fertilization here is reciprocal. Protandry, with both sexes present but at different time intervals, is found in some bristleworms. 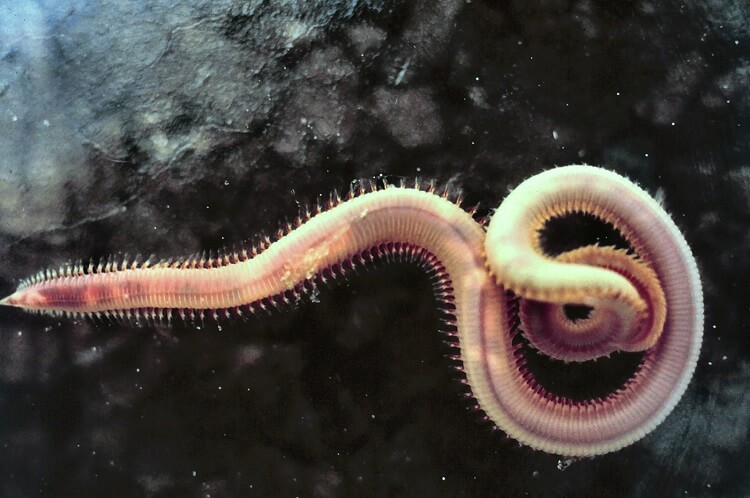 Development frequently is from a fertilized ovum. The single fertilized egg cell divides by spiral cleavage to a ciliated, almost spherical larva called a trochophore.

Bilateral symmetry is established at the onset of segmentation, when the larva is called a polytroch. Earthworms and leeches, which lack a larval stage, hatch from a fertilized egg in a stage resembling a young adult. Future growth results in replication of segments and diversification of body parts.

The life span of annelids has been studied best in a few species. The medicinal leech is said to live as long as 27 years; the common earthworm lives about 6 years, and some bristleworms live to 3 years.

The mouth structures of the various groups of annelids are related to their methods of feeding. Members of the earthworm group have a soft pharyngeal pouch because they are primarily scavengers in mud or earth. The leeches, which are parasitic predators or scavengers, have mouth parts adapted to sucking.

The bristleworms are diversified—many are grazers, scraping off surface crops; others are scavengers, selecting food particles with the aid of sense organs. Detritus feeders indiscriminately scoop up food together with large amounts of inert sediments, which are defecated in characteristic fecal pellets through the alimentary tract. Feeders that capture living animals have capturing mouth parts and special jaws, mandibles, or paragnaths (small, horny, toothlike jaws). Some bristleworms with long, ciliated structures entrap small animals in a ciliated groove and transfer them to the oral cavity. Others enmesh the food in mucous balls before placing it in the oral cavity. Bristleworms found in the open sea capture prey through a wide-open mouth. Some commensals, which live in tubes or burrows of other animals, subsist on the offal of their hosts; still others are parasites and either attach themselves externally or invade the tissues of the host.

Because of their soft, unprotected bodies, annelids generally inhabit concealed places and thus escape detection. They frequently are found in surface deposits of sand, mud, rocky crevices, and in clustered biotic associations, such as kelp, sponge, bryozoan, and other masses. They often live in tubes specially constructed with bodily secretions. The habitat of the annelid is as closely adapted to the species as the feeding mechanism is to the requirement of nutrition.

The range of physiological tolerances is exceptionally wide. Some annelids are found in thermal springs; others are found in deep marine sediments at or near freezing temperatures. Some occur in saline lakes, while others are found in variable brackish estuaries. Anaerobic (absence of free oxygen) to highly oxygenated aquatic conditions are tolerated by some species.

Terrestrial and freshwater annelids, especially the wandering species, such as the earthworm, in temperate zones are more cosmopolitan than others. Marine species are not transplanted readily and show a higher degree of endemism (being restricted to a particular area), as well as a greater diversity.

The phylum Annelida (also called Polymera) is characterized by the presence of many segments in linear arrangement. The phylum includes the classes Polychaeta, marine bristleworms; Oligochaeta, earthworms and freshwater worms; and Hirudinea, leeches.

Sometimes called Chaetopoda,these are largely free-living annelids found in coastal waters up to depths of 150 fathoms (900 feet, or 274.5 meters). They occur in smaller numbers and more numerous kinds in all oceanic depths from polar to tropical seas. Polychaetes are classified into 64 families, with about 1,600 genera and more than 8,000 species.

The most convenient breakdown of the class Polychaeta is into Errantia, or freely moving species, and Sedentaria, or tube-dwelling species. The separation is not entirely applicable, since many Errantia are tube-dwellers, and some Sedentaria are not sedentary. However, this system groups morphologically similar species into workable units. A few lesser families with atypical characteristics are known as Archiannelids, meaning primitive annelids; however, this is a mixed group, and it is uncertain whether or not they are primitive or specialized forms.

The polychaetes vary in size from a fraction of an inch to several yards (a fraction of a millimeter to several meters) long. They may have 6 to 800 segments. The largest polychaetes are in the superfamily Eunicea, where lengths of 2.2 yards (2 meters) have been reported for Onuphis teres, a species found in southern Australia. Some common genera are Aphrodita, Polynoe, Nereis, Glycera, Cirratulus, and Terebella.

Oligochaeta and Hirudinea sometimes are called collectively Clitellata, in reference to the presence of the clitellum, a swollen ring of glandular cells, present in most larger forms. The class Oligochaeta includes about 2,400 species in four major groups or suborders and about 211 genera. They are mainly free-living, freshwater and terrestrial dwellers. Common aquatic genera are Dero, Nais, and Tubifex, and common terrestrial genera of larger species are Lumbricus, Pheretima, and Eisenia. The largest of known oligochaetes are Rhinodri-lus fafner, which reach a length of 2.2 yards (2 meters), and Megascolides australis, which is nearly as long.

The oligochaetes have distinct segmentation, and segment numbers vary from 7 to 500 or 600. They lack parapodia but have setae in double-branching bundles. The clitellum, or glandular area, secretes mucus, aiding in copulation and cocoon formation in the larger oligochaetes. Cal-ciferous glands, limited to oligochaetes, are derived from the esophageal wall and function to control the level of calcium and carbonate ions in the blood.

Respiration is usually through the epithelium or through special gills in some aquatic species. Choragen tissue, which surrounds the dorsal vessel, is the center of glycogen and fat synthesis and may store silicate excesses, which then are excreted as waste.

Oligochaetes are believed to be derived either from small, primitive, now-extinct polychaetes or from a medium-sized nereidlike polychaete.

The class Hirudinea, which contains the leeches, has more than 400 species; they are marine, freshwater, and terrestrial. The best-known are the bloodsuckers. Sizes range from a fraction of an inch to more than 20 inches (a fraction of a centimeter to 50.8 cm). The bodies of leeches are long and depressed and terminate in a sucker at either end. The number of segments is constant at either 34 or 33, and each segment has several rings. The body is divided into five main regions. Some common genera are Hirudo, Glossiphonia, and Pisciola.

Annelids have left little evidence of past life, except for the remains of jaw and opercular (flaplike) parts, tubes, trails, or castings. They evolved in Pre-cambrian times (500 million or more years ago) and left remains known as scolecodonts, which can be related to present-day eunicid and nereid (two polychaete types) jaws. The well preserved series of middle Cambrian (about 450 million years ago) fossils indicates their diversification at that level of time.

Annelids are related to other phyla by their segmentation and trochophore larva. Metamerism, or segmentation of the body, into a bilateral (two-sided) linear form, is a feature shared with the phylum Arthropoda. However, the arthropods have an exoskeleton (horny outer skeleton), which is lacking in the Annelida. The more closely related phyla, Echiuroida and Sipunculida, differ in that they lack external segmentation. A larval trochophore is present in these forms and also in mollusks and some animals with few or obscure segments, such as Bryozoa and Brachiopoda. The presence of setae is unique to polychaetes and oligochaetes and a few echiurids.