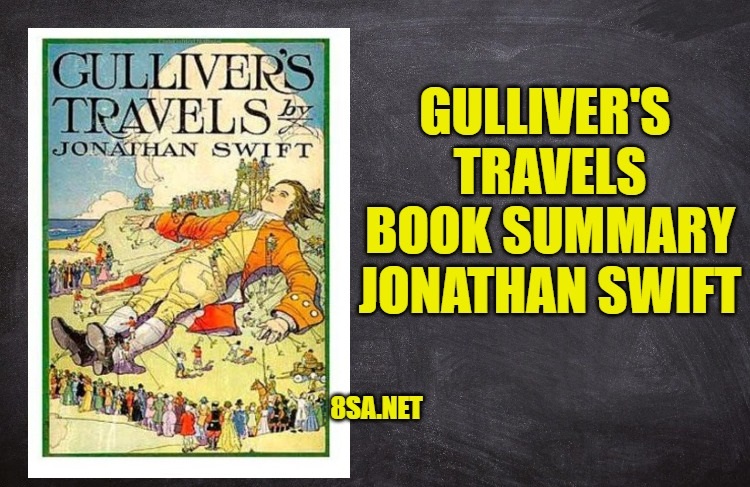 Gulliver’s Travels; is a satire by Jonathan Swift, published on Oct. 28, 1726, as Travels into Several Remote Nations of the World, by “Lemuel Gulliver.” Swift’s purpose, as he wrote to Alexander Pope in 1725, was “to vex the world rather than divert it. . . . I have got materials toward a treatise proving the falsity of that definition animal rationale, and to show it should be only rationis capax”—that is, “capable of reason.” Swift’s aim was to shock men out of complacent satisfaction with themselves as rational creatures and awaken them to a full sense of their equal capacity for error, corruption, and bestiality. To do this he created the character of Lemuel Gulliver, a surgeon of considerable education and goodwill but little critical awareness—a man, as his name suggests, gullible and adaptable, with a firmer sense of fact than of principle. Gulliver is sent on four voyages to imaginary lands whose inhabitants are in fact symbolic embodiments of tendencies common in all men.

In his first voyage, Gulliver discovers himself at Lilliput among people one twelfth his size. They have a complex social order—full of mistrust, factions, and false accusations—that is the corruption of an originally rational and just system. Through the Lilliputians’ trivial disputes, Swift mocks the divisions in his own England between Whigs and Tories, High Church and Low Church.

Gulliver becomes the unwilling servant of this petty state, although the conferring of honors on him tends to blind him to its evils. Only when inhuman measures of conquest are proposed against the enemy whom Gulliver has subdued does Gulliver resist the will of the court. He is then accused of treasonous intentions in the most innocent of his actions, and he flees to save his life.

In the second voyage the scale is reversed. Gulliver in Brobdingnag is among giants 12 times his size. There he is seen as dangerous vermin, or a charming plaything, but scarcely as an adult human. As a result, Gulliver’s pride moves him to childish feats of prowess, many of which end disastrously.

The pettiness into which Gulliver has fallen— now himself a Lilliputian among people of larger vision and greater generosity of spirit—comes to a head in his talks with the king. Under questioning, Gulliver reveals, without meaning to, the discrepancy between the just original institutions and the corrupt malpractices of the English nation. The king’s horror at this “most pernicious race of little odious vermin” only stings Gulliver to make the proud offer of destructive weapons of war by which the king might maintain absolute power. Gulliver remains unable to comprehend a culture that rejects all the complex means, whether of politics or learning, that tend to replace true ends and produce corruption. 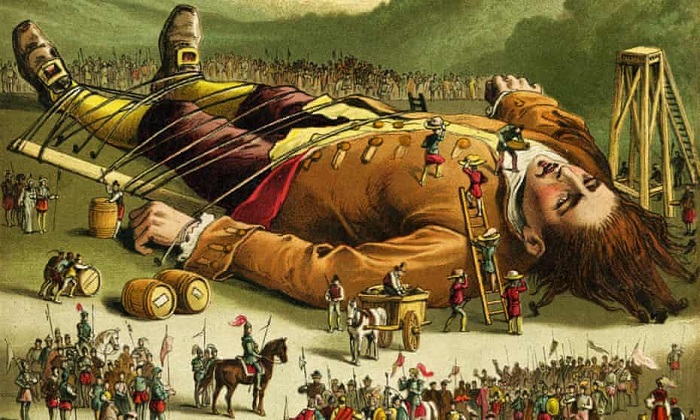 The third voyage is more varied. Gulliver visits a series of lands where scientific ingenuity has lost all touch with social purpose. On the flying island of Laputa a race of absentminded pedants maintains a tyranny over the mainland below them. In Balnibarbi below, new schemes are prized for their cleverness rather than their usefulness, and the perpetual pursuit of novelty has laid waste the land. In the Grand Academy of Lagado, lunatic scientists (not unlike some contributors of reports to the Boyal Society of Swift’s day) beg support for projects whose only recommendation is that no one has ever attempted them before. These include extracting sunbeams from cucumbers and making pincushions of marble. Swift is criticizing the credulous scientific enthusiasts of his day; his implied standard is ultimate service to mankind, even at the sacrifice of a display of personal cleverness.

The final encounter in this voyage is with the Struldbrugs, who achieve eternal life without either youth or wisdom. They reveal man’s potential corruption extended over a limitless vista of time, and they provide an antidote to foolish dreams of inevitable progress.

In the fourth voyage, Swift draws together his themes in the most powerful symbols of the book. Gulliver encounters a race of horses, the Houyhnhnms, who are thoroughly rational (as man sometimes imagines himself to be), and a race of creatures of degenerate but unmistakable human aspect, the Yahoos, who have lost all powers of reason except a low cunning by which they further their brutal appetites. Gulliver wishes to be accepted by the Houyhnhnms and dreads being taken for a Yahoo, but the identification is difficult for the Houyhnhnms to avoid since they have seen no other humans before. In his effort to describe European culture, Gulliver ends by creating a picture of the Western world of his day as a more elaborate, more ingenious, but hardly more admirable counterpart of Yahoo bestiality.

Gulliver by now has lost his ability to see that the rationality of the Houyhnhnms is too inhumanly simple for man; he accepts the identity of man and Yahoo, and he shrinks with horror from his own kind when he must return among them. He has, in short, become mad with pride in pure reason, and he can no longer bear his fellowmen now that he sees them as less than rational animals. Swift makes this madness clear in showing Gulliver’s disdainful treatment both of the humane Portuguese sea captain who befriends him and of his own family later.

The irony of the book is unrelieved; the reader can hardly go all the way with Gulliver, and he is left to find the elements of truth in Gulliver’s discoveries as well as a temperate and sane way of coming to terms with them. Too many readers have tried to shrug off the problem by misreading the book as an expression of Swift’s own misanthropy; in that way they can be vexed with Swift rather than with their common human faults. To do this is to miss the point of Swift’s major questions: How can we call that reason which does not control but only serves our most savage appetites? How much that we call culture is simply complicated brutality?

Through his use of the naïve Gulliver as narrator, Swift achieves one of the masterpieces of English ironic prose. The book is written in a stolid, literal style that catches physical details with all the precision one might ask of a scientific report. Yet it is constantly implying judgments or drawing relationships that Gulliver cannot see. The reader must see through Gulliver as well as with him and must make his way through a constantly unsettling voyage of his own into new perspectives rather than strange lands.