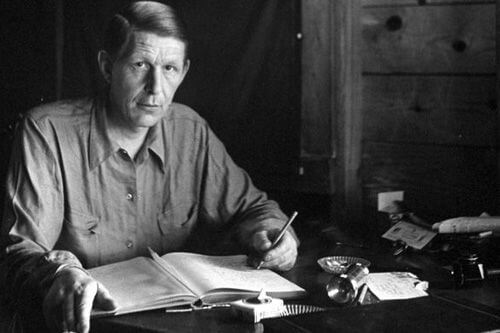 Wystan Hugh Auden;(1907-1973), British-American poet, who became one of the dominant voices in 20th century English verse. He exerted a formative influence not only on poetry and prose but also on people and opinions—in the 1930’s as a romantic radical and after 1940 as a convinced Christian. Auden conveys his moral acuteness and concern in a graphic, varied, and rich vocabulary. His verse is marked by a fierce and sometimes macabre wit and by a facility that recalls Byron or Browning. His mental landscape, like his geographical, is “Northern,” with fells, rocks, scarps, and worn hills, as well as industrial debris, suggesting the polar peril of a new ice age.

W.H. Auden was born in York, England, on Feb. 21, 1907. His father was a’distinguished physician; his mother had been a nurse. Both grandfathers were Anglican clergymen. His home atmosphere, as a result, was both scientific and devout. He intended to become a mining engineer, but in March 1922 a friend asked him, “Do you write poetry?” He never had, but from that instant he knew what he wanted to do, and his first poem was published in 1924. In 1925 he went to Christ Church, Oxford, where he studied English and coedited Oxford Poetry, 1926 and Oxford Poetry, 1927. He dominated his companions in a father-confessorly way. In 1928 the poet Stephen Spender handprinted 26 of Auden’s poems in an edition of 45 copies.

After leaving Oxford in 1928, Auden spent a year in Germany, where he “fell in love with the language” and was influenced by the playwright Bertolt Brecht and by German cabaret and theater songs. He also acquired a passion for politics and psychology. On his return from Germany he became the most exciting social poet, in England, the leader of the literate left and the poet analyst of a sick society. Auden’s Paid on Both Sides, a poem published in 1930 in T.S. Eliot’s quarterly Criterion, was dedicated to the poet C. Day Lewis, whom Auden succeeded that year as an English master at Larchfield Academy, Helenburgh, Scotland.

In 1936, although he had not previously met her, Auden married Erika Mann, the daughter of the German novelist Thomas Mann, to provide her with a passport so she could leave Nazi Germany. They remained married until Erika died in ‘1969. In 1937, during the Spanish Civil War, he went to Spain as a stretcher-bearer. That same year he was awarded King George’s Gold Medal for poetry. In 1938 he and Christopher Isherwood went to China, then together wrote the play On the Frontier ( 1938 ) and an essay in prose and verse, Journey to a War ( 1939).

Poems (1930) made Auden’s reputation. It included Paid on Both Sides and 30 other, poems and was published by Faber and Faber, where T.S. Eliot was an editor. Poems castigates and satirizes the bourgeoisie as doomed from without by the inevitable march of Marxism and from within by the interior death-wish that motivates its noisy resistance. However, both writer and reader are part of that bourgeoisie, which Auden loved and later also prayed for. These ideas are expanded in The Orators (1932).

Auden and Isherwood collaborated on two more plays, The Dog Beneath the Skin (1935) and The Ascent of F6 (1936). Auden and Louis MacNeice, a fellow poet, went to Iceland in 1936, then collaborated on Letter From Iceland (1937), a volume of prose and verse.